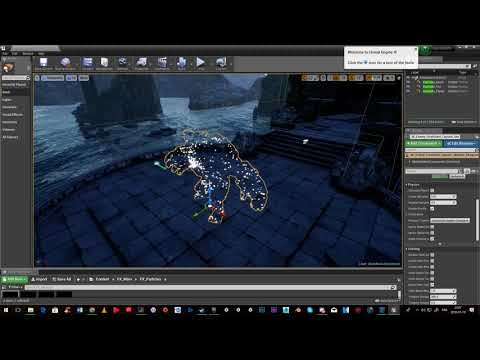 I have a problem that i’m trying to solve since a few days but can’t come up with anything by my own so i’m asking there. As you can see in the video, i made some particles spawn on a skeletal mesh to give it some kind of noisy ghost shape. Easy part.

The problem is that the particles disappears on a specific angles and i don’t know why. So i tried : To increase the bounding box/make the particles follow the camera in the required module/set the naterial to be double sided/and other things that probably doesn’t makes sense… But nothing.

1/ How to solve this problem ?

2/ If there are no answers: Is it possible to achieve this via a custom shader ? To make spawn the same texture multiple time and at different location of the surface of a mesh ? If so, how ?

Edit 1: Now that i think about it, there is the mesh material that i set to 0 in the opacity so only the particles attached to it are visible. That’s may be the reason why this doesn’t allow the particles to render properly.

Edit 2(WRONG): Found the solution on my own a while ago but i thought i sghould share it in case people would encounter the same issue. So, it appears that using set fixed bound caused this to happen. Just keep it unckecked and you should be fine. I don’t know why, but at least it solved my problem.

EDIT 3: My bad, back then, in my own confusion, i forgot to both increase the bounds values and to check the set fixed bounds. Now it BOTH works and makes sense. It was just me being a biggot. Thanks to Alex for helping me realising it.

You should pretty much always leave fixed bounds on - its good practice to always set them up. It will tank the draw thread if you have a lot of emitters recalculating bounds every frame. Or let me put it another way, I’ve never had bad things coming from having fixed bounds.

Now, I’ve had it where setting auto fixed bounds in Unreal will cause it to either set to a small value like you’re seeing, or seemingly ok values but flickering.

Your best bet is to set them up manually by hand if that happens. I normally just throw in -256 as a min and 256 as a max to start with but use whatever’s suitable.

Without knowing your shader it’s hard to know if this will be causing anything, but be aware that actorworldpos/objectworldpos and bounds related elements in shaders will change in accordance to this bounding box.

If it still happens you might want to try having the particle system as a child component of the skeletal mesh, and having it use parent bounds.

I guess i’m an idiot. The first time i created this topic i was confused on where to click to see where the bounding box options were so i didn’t understand why.

Right after that i, learned that i just had to click on the void next to the emitter to see it and thought i already increased the bounding box and that it didn’t worked. And now that i read your reply i decided to verify again and to BOTH increase the bounding box with the fixed bounds checked… Guess what, it worked.

Thanks for the reply, i spread some false solution because of my own confusion. I’m gonna rectify that.