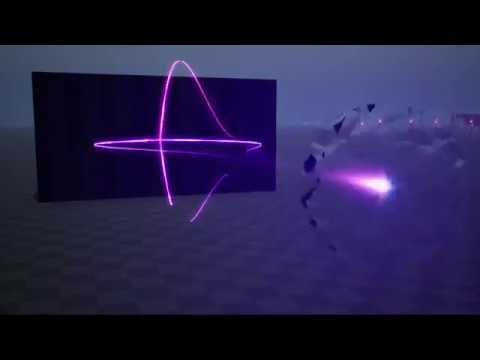 Based heavely on the dubstep guns from saints row 4

woah how’d you get those sexy particles along that trail? Didi you make a particle system follow a spline path? Also were you using a particle emitter, or like a beam emitter for that?
Awesome.

I’ll refer you to this tutorial

https://i.imgur.com/PgT7hOn.mp4 In this tutorial I’ll be going over a common technique used when building spell effects in games. I like to call them Soulercoasters, but you can name them whatever you like. The effect is a trail that flows along custom built mesh with flat uvs. Like a rollercoaster, you could say. This gives the look of a particle trail while having all the custom complexity of a mesh effect. This kind of effect is great for building weapon slashes, will o wisp style trails and…

What I’m doing is a variation on that with a slight be more control over timing and scale.

Yesss!!! I was hoping someone would do exactly this! Loving it dude. Can’t wait to see the end result!

I know you’re still on your initial WIP pass but I would really like to see it react to the beat of the song some more. Also your distortion shockwave disappears a bit too quick to appreciate!

I found this post from the audio designer of SaintsRow4 on how they synced the FX to the beats of the song.

I’ll sit down with one of the dudes that set these up and get more details, but here’s what I know:

Without these markers, the weapon wouldn’t even fire. In fact, for a time during development, the weapon wouldn’t fire at all if the player had either music or SFX disabled through the options menu. This weapon is unique in this way - All other weapons have audio triggered by the weapon firing, projectile, or VFX.

I’ll figure out if these markers are transferrable or hard-coded, and if the former, whether or not they can be modded. I’d love to see some of the possibilities the community can come up with.