Hey everyone! I’ve been trying for a long while to get a lens flare going like this gif that i’m referencing to.

For some odd reason the origin point of my particle isn’t centered on my sphere when it’s set to 0x0x0. I’ve tried to manually move it to the center it but it’s still not centering when I move angles. I’ve even tried locking the axis. Any insight on how to fix it would defiantly be appreciated.

Another issue is that I’m trying to change the size of the flare as it should get smaller over time, when I try to do that it also moves the particle as I just want it to stay where it’s spawned.

My final issue is that the ring also jumps or jitters in it’s dissolving animation. I know the cause is because it’s resetting the loop animation dissolve but I don’t know how to fix it so that it doesn’t have that issue.

Thanks again for any feedback and help! I’ve been stuck on this problem for a while and it’s been eating at me on fixing it T_T.

Can’t quite read anything because of how small the images are, but it looks like you’re using mesh data on the flare - correct? I would make sure your mesh’s origin is centered before importing as that is my best guess since I can’t really see what else is going on. I hope that fixes that problem. As for the ring, if you could post some larger images it would be easier to see what all is goin on

Yeah! Sorry about the small image. I’m still trying to figure out how posting works. Thanks for the help. I’ll try centering my mesh origin. 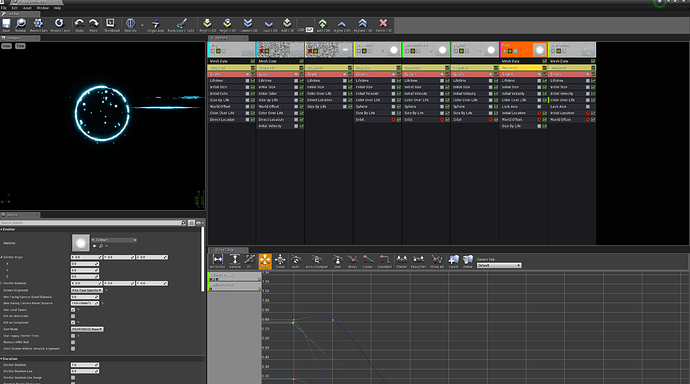 and here is the ring issue i’m having, if you look at the first burst you can see it flashing after it spawns and later on the gif it goes back to normal. It doesn’t happen all the time but enough where it is noticeable especially when trying to spawn it in.

Thanks again for the reply and i’ll see if the origin point is fixed!

From the image you shared, it looks like your tangents need to be clamped. I would try fixing that real quick to see if that’s the source of your issue

. Hopefully that solves it, but if that’s not the case, then could you explain how you’re goin about the erosion? My guess from the image is you’re doing it through color or alpha over life.

I’m a little confused as to what the last two modules are in your system that are using mesh data are supposed to be? You should only need a max of 4 modules to recreate this effect, and only the dissolving ring should be using mesh data

I might have overthought the reference but I thought that the flare was using a cylinder model along with another mesh overlay for a wisp to show instead of a plane. It’s hard to see in the gif but I have the game and its like really subtle with the wisp overlay, now that I think about it you are probably right on not using mesh. As for the other emitters yeah I probably should delete the ones I’m no longer using or was testing. Thanks for the feedback I’ll see if I can fix it!

Thanks so much for the feedback and help! Yes it did seem that the issue was me freezing the origin point to the mesh, and apparently the sizing issue is being the cause of having too small of a model! (Didn’t know that was a thing lol.)

I tried clamping the alpha and it still seems like it hasn’t fixed it lol. Though it seems like it doesn’t happen as often now so that’s good.

You can lock everything to camera facing too, could help keep your effect looking the same no matter what angle it’s viewed at