Time for some magic missile WIP! I have a rough concept that I’ve been trying to work towards.

Here’s what I have so far:

And this is my very simple concept: 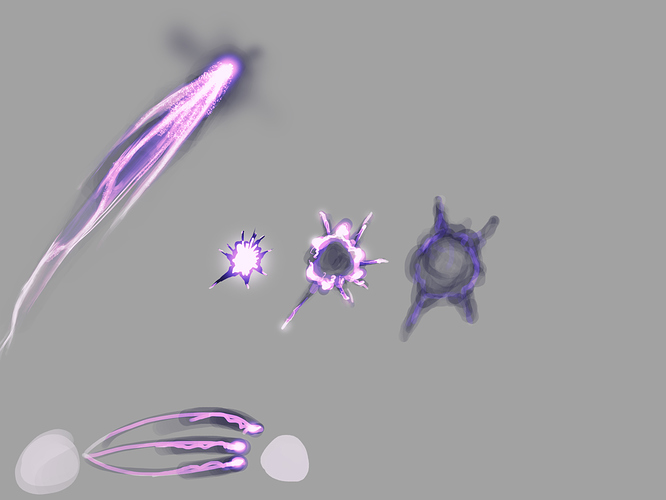 I will try and make the chargeup a little smaller compared to the impact and see if I can get the chargeup and launch effects to feel a bit better.
Atleast I FINALLY have the blueprint setup where it spawns these 3 little babies and all their emitters and moves along the splines.

Please give me your feedback and ideas!

Well! It certainly LOOKS good. Color & Shape are spot on to the concept. The only real criticism I have is movement, which may be an artifact of the format.

I’m seeing the movement stop and start on a few places. I presume this to be dropped frames from compresstion, and not of your actual effect. That said, if this is a magic missile, I’m not feeling the movement. That ending speed feels like… bubbles popping. It’s so casual. You start with a build up and then… pifff. Well that’s not very satisfying at all.

Also… A bonus thought; my brain thinks you should look at solar flair shapes to help the build up.

I think that would make it feel better. The absorption thing is nice, but… it feels like it doesn’t match to me. It may simply be a timing thing or maybe I’m a creature of habit, but that absorption makes me think of a build up for a beam action of some sort.

Nice work so far all in all!

Good feedback @Mez ! I appreciate it!
I’ve been thinking about the buildup myself and I think you have some good pointers!

i like the colours and shapes but the timing feels a little slow and pedestrian - the charge up, travel time and impacts all seem quite similar which gives it quite a steady rhythm.

the effect also seem to disappear completely between the charge up and the firing which is where it should be contained with the most potential energy ready to fire, imo. 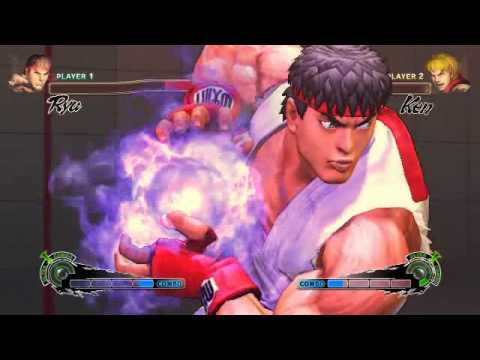 I agree with you and I can’t wait to get home from work so I can start fixing this!

Great work!
That clouds on endings - did you draw sprite sheet for them by hand? They looks awesome!!!

I would like to know about those clouds as well, cause they look otu of control!.

Also how did you animate something like this/ did you use meshes with bones in them to get the particles to go along a trail like that?

This is not feedback as such; rather it’s a question from me: what sort of scale is this effect that you are working on? The context here is important to me because it would have implications for the feedback I give.

What I mean by this is imagine if it was a fire effect: fire is fire right? But a candle flame is fire, as is the flames spewed from a massive dragon’s throat.

Already you have been given (perfectly valid) reference the scale of the sun, and of a human character. So yeah, I’m probably laboring the point but hopefully you see why I’m asking it.

Thank you! @yarpoplar and @pmiller ! I’m deforming them with a flowmap! I’ll break it down once I’m feeling satisfied with the rest of the effect!

I’m using a spline in Unreal so I can easily edit it. There’s an emitter being moved along the spline and it has particle ribbons attached to it. I can break it down a bit as well once I’ve nailed the effect more

@Snowy I would imagine this being cast by a human sized sorcerer! I’ve been wanting to do something similar to the magic missile spell in Neverwinter Nights since I played it several years ago. I’ve also been inspired by all the cool trails shown in @ShannonBerke LoL thread!
But I’d love to hear what you have to say!

Here’s what I have so far:

I’ve reduced the size and components of the chargeup, making it build up towards a larger projectile and increased their speed dramatically. Also changed their paths.
Still a few hours left of today so I will keep experimenting! There’s still a bit of laser feel to the chargeup and I’ll see what I can do there!

Here’s another update where I experiment with the path and timing of the projectile:

W o a h working on a spline is a really smart idea ( i wish i did something like this for my riot contest entry) the iteration on this has been awesome! I’m really digging the timing of it, the way they lag behind a bit then speed up is cool. it might be cool to see some more lingering energy among the missiles paths but overall it’s looking really sweet!

It’s a great way to move all the control over to Unreal instead of using an animation that you will have to bake out or export from some 3rd party software! I’m really glad you like it @Jason_Chisolm! I’ve added some small sparkles being left behind by the energy balls

I will have to leave this one for now but I’m feeling quite happy with it.
Here’s the last update for now: 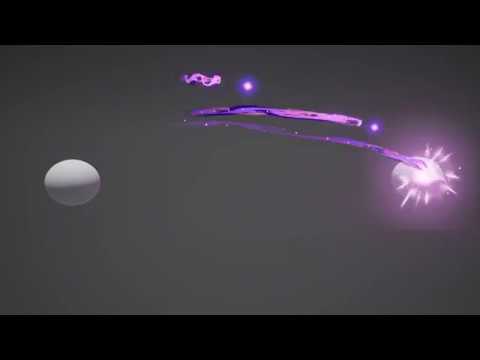 Here’s a breakdown of some of the elements:

I use the same smoke material and texture for both the explosion smoke and fire. The flowmap influence is simply different and colors of course. 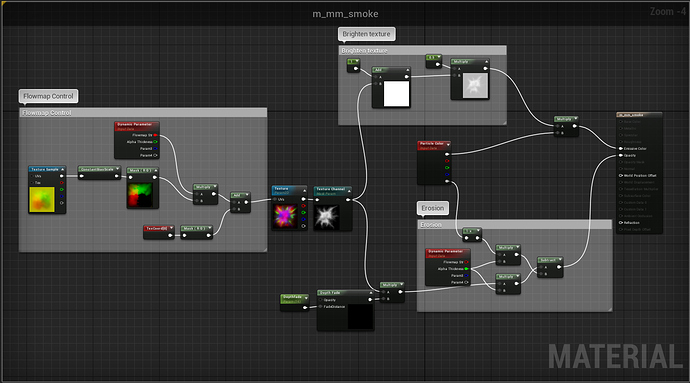 I’m brightening the dark areas of the texture to avoid having black outlines at the outermost edges. Loosing a bit of contrast is fine in this case I think. The alpha is still having full contrast to use the erosion at its fullest.

The Flowmap is simply a normal map texture that I painted in Krita. (There’s a brush for that in Krita so its very easy! You just need to flip Y in the brush tools to match how Unreal reads the channels) Otherwise the flowmap can be treated as any other UV distortion, except that it’s not panning, you simple increase or decrease its strength.

Here’s the smoke and flowmap texture: 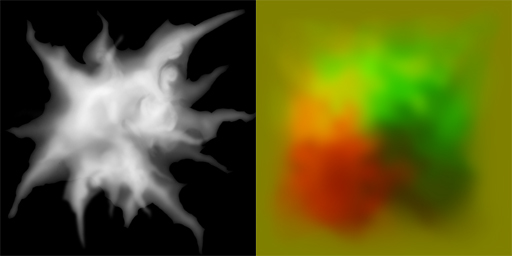 For the projectile I’m using two billboards at the front and 3 ribbons tagging along. One thin and long, one medium length which is really dark and one which is short, bright and wide that tapers down.

Here are the splines in the blueprint: 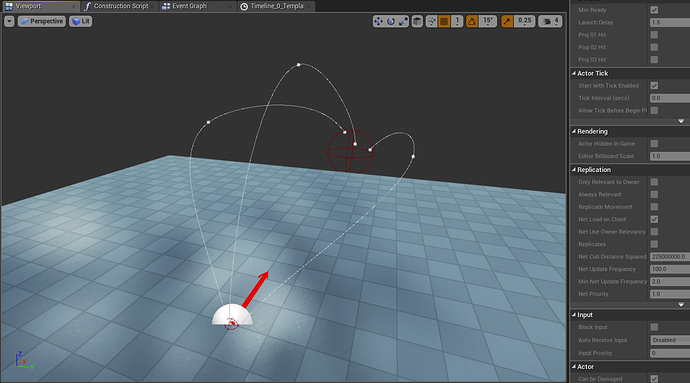 I’m using a timeline inside of the construction script to move the emitters along the splines to finally collide with the sphere at the end. 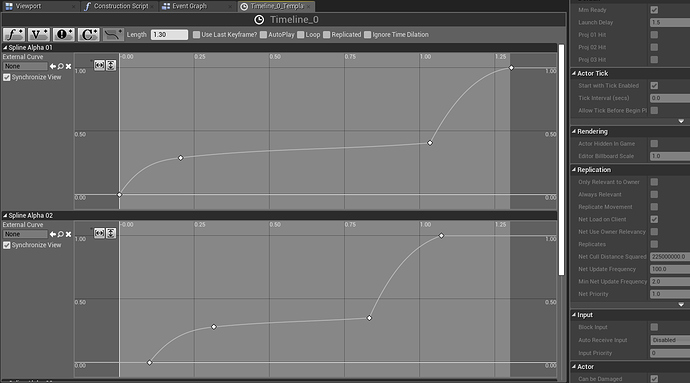 This was a great experience! I really want to make more spells in the same family as this one but I’m about to get really busy so most likely I won’t have time to make VFX for a bit.

Hopefully this will be useful to some people out there! I’m happy to answear any questions that may pop up!

Erosion is likely to be cheap and useful. Thank you for sharing your know-how.

I really like how this has turned out! The pause you have added prior to the missiles finding their target has really injected some personality into the effect.

Thanks for taking the time to share your breakdown with us all here! Seeing the individual assets on their own, the impact UV distortion looks a little too strong towards the end (starts to look like a Photoshop filter > distortion> twirl) but honestly, I only picked up on that after seeing the breakdown.

Thanks for breaking this down! when you say “billboard” for the projectile, do you mean a still image?

@slowdive It’s my pleasure! I’ve grown a fond love of erosion. I wouldn’t say it’s my new standard but I wouldn’t want to go without it

@Snowy I’m happy you liked it!
It always feels like great fun sharing things on this forum because it feels as if it’s actually helping people. There’s a wild mix of veterans and newcomers here and I think the more we share the more newcomers will come and grow!
I can agree on that it gets a little heavy on the twirl / liquify feel!

I’ll be sure to post more of them in the future when I unlock a little more time!

@pmiller You’re welcome! I’ll be happy to answear any further questions you might have!
You’d call a sprite which is always facing the camera a billboarded sprite, where being billboarded is the technique of having said sprite, or quad, always facing towards the camera. You can in Cascade lock the sprites in different axis but then it wouldn’t count as billboarded any more.

Great work, thank you for sharing! I also love the look and versatility of erosion, could you inform/comment on your preferred method of creating the source texture. I have been playing with using 2.5D in Zbrush but feel like theirs probably a more elegant way to approach.

Great work! Thank you very much for sharing it!
How did you draw that awesome flowmap? You’ve drawn it by hand?

Thank you! I’m happy you liked it

I used Krita to draw it by hand. It’s not very advanced but I can show you how you can do it in Krita!

Krita is a professional FREE and open source painting program. It is made by artists that want to see affordable art tools for everyone.

I’m using the VFX Paint workspace and you can turn that on here: 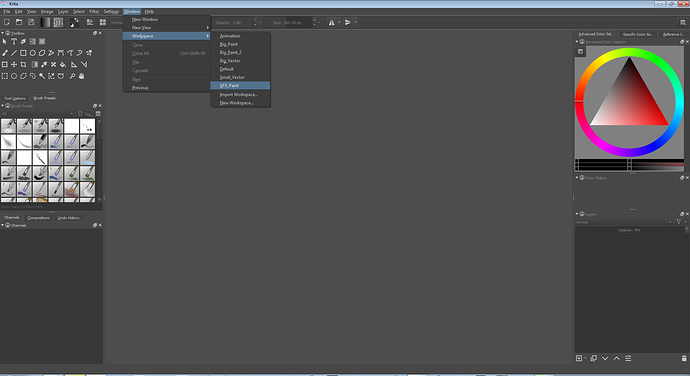 Then open a new document and open the Brush Editor and select the Tangent Normal brush engine and change the Tangent Tilt green to -Y. If you don’t, uvs will get pushed the other way in Unreal. 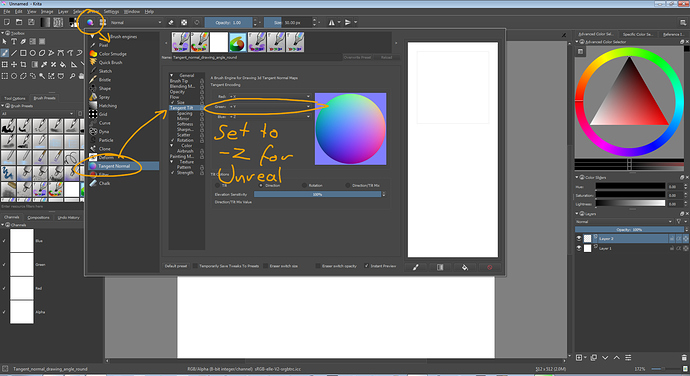 Then fill the background layer with “128, 128, 0” in color and start painting!
I used the “Blur” filter to smooth things out. You can do that in a lot of layers and blending between the layers. Anything that’s colored “128, 128, 0” will mean that the UVs are not moving since that will be set to 0 in value in the Material later when we change the bias or the texture, or import it as a normal map. 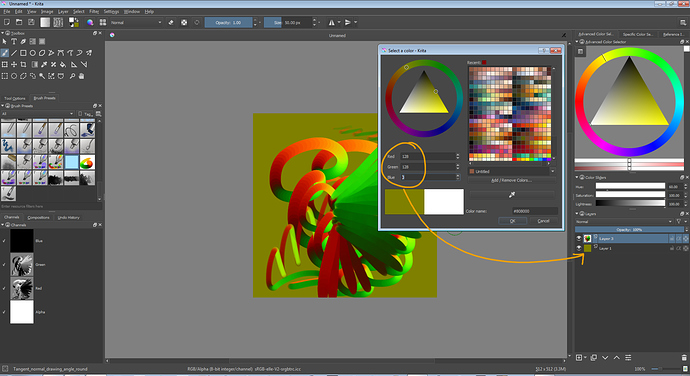 Also, if you want to be able to tile your texture you can tile it while drawing inside of Krita like this:

I made my texture by simply painting outwards, bluring and fading out edges so the texture stopped distorting at the edges of the texture

I hope this was helpful!
Good luck and make awesome textures!