Hey guys!
First time posting here.
So, I made this effect: Liquid Explosion - WIP , and I kind of like it, but I know that there is a lot of room for improvement, so, if possible, could you guys share some tips and comments on how to improve it?

Thank you in advance.

Hey welcome to the community! Looking really good. I like the initial burst that’s fast and satisfying, and the slow fall of the goo. I would say the speed of the falling goo feels like it’s a really big blast, and I’m watching tons and tons of goo fall from a high angle. If it’s meant to be smaller, maybe tightening up that timing/gravity a bit.

Other than that looking great, I really like the textures!

Edit: also if you just paste your YouTube link it will automatically embed on the page!

Thank you so much for the feedback!
Makes me really happy that you like it.

I’ve made it intending to be a big explosion, but now that you’ve said it, I’ll do some experiments on how a smaller explosion would behave.

The textures I’ve made thanks to @JangaFX’s and @Keyserito’s awesome tutorials.

Hey guys, it has been a little while, but I’ve done some adjustments on the Liquid Explosion effect. https://youtu.be/huQx1euT6dA
I’ve placed an Unreal mannequin for better understanding of the scale, as well as some darker background to better visualize the effect.

If you have any comment or critique, please tell me. I would love to see what you guys have to say.

PS: I’ve tried to make the longer lasting droplets to spawn a mesh when they collide with the floor. It works fine when seeing it on the level, but when I hit play the particles just go through the floor (as seen on the video). Anyone got any idea why?

The particles you’ve mentioned are falling a bit too slowly for my taste, they dont feel like liquid to me.

As for the mesh spawning issue, could it be that those particles need to be gpu particles? Do they have collision detection? Are they checking collision with the world / level or are they looking for a specific type of mesh collider?

Does the first sphere you spawn have a double sided material? It feels a little bit flat. Maybe tint the inner faces with a darker color to give it some depth.

Thank you for your feedback!
I’ll be making this changes later today.

Hmm haven’t thought about that, will check that out.
If I’m not mistaken the sphere does have a two sided material. I’ll look into it.
Thanks again for the feedback! 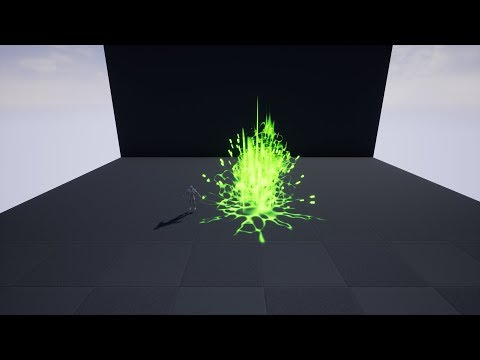 Hey guys! Hope everybody is doing well.
Here’s the final version of the Liquid Explosion effect I was working on.
A lot that could still be improved, but I want to start testing other things for now.
Let me know what you guys think so that I can do better next time.