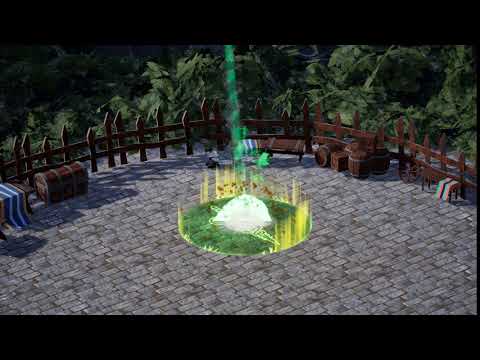 Overall I’m pretty pleased with how the effect came out, I can see that it needed some more artistic flair and could do with some more advanced techniques to really sell the explosions, but for a first attempt at a proper effect I don’t think it’s too bad.

Been looking at some of the other entries and really liking the effects people have come up with and all the different interpretations of ‘Bombardment’.

Wishing everyone the best of luck and good fortune to the judges, i’m really not sure how you’re gonna pick a winner!

Been doing some planning and drawing a couple of concepts.

I’ve decided that my effect will be created as though it were an ultimate in a game such as League of Legends or Overwatch, so it needs to be small enough in scale as to fit into a battlefield, while feeling as though it’s huge and devastating.

To achieve this, i’m currently going for a meteor storm as the premise of my effect, where I will have a series of meteors raining hell from the sky, followed by a much larger, more destructive finisher. 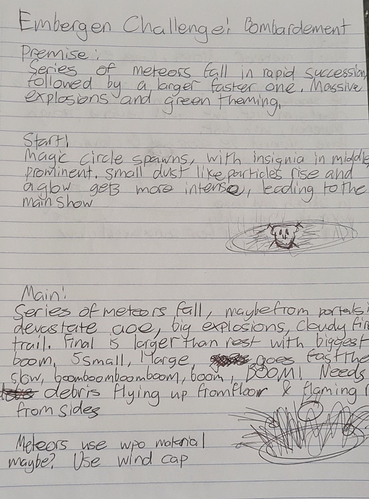 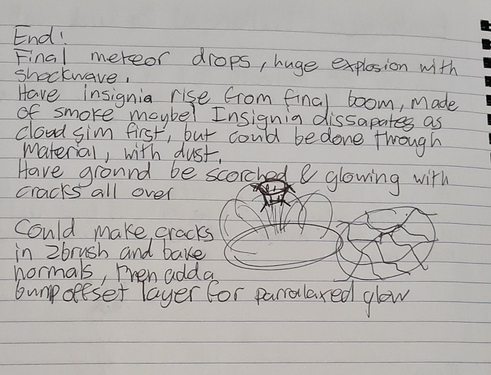 Apologies for the shonky handwriting, this was me just getting down the visual I had in my head. 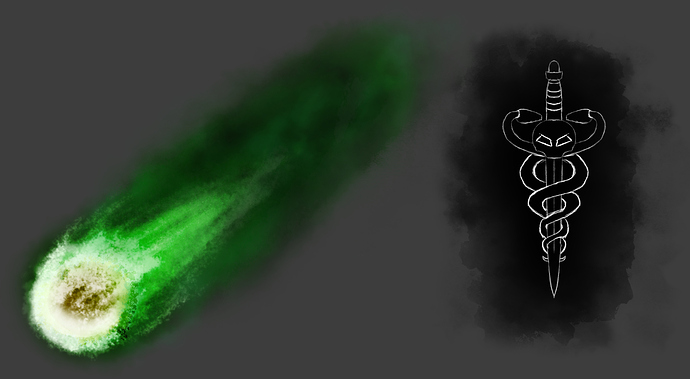 Made a start on my meteor effect. So far I got the base of the trail made, using a spritesheet from embergen.

I initially was going to use motion vectors to get a smoother animation, but couldn’t get the cutout feature to work along side, and decided that the overdraw prevention was more worthwhile, especially for this part of the effect.

Made a small prototype for so I can try to get my timings down before commiting to any detail work.

Had a fair bit of trouble getting the death events to work properly in niagara, but got there in the end. Saying that, i’m getting a bug where if I set my explosions emitter lifetime to be any longer, I get loads of particles spawning in the final location. If anyone has any idea why this is happening I’d appreciate a hand.

I’m now reaching the point where i’m struggling to push the effect further, I’m gonna add some more flair to the explosions but I need to start working on other effects and learn some more techniques.

Since my last post, I’ve added some rim effects to back up the build and impacts, and generated a proper spritesheet for the explosions. I’ve also modified the floor material to make it a bit more interesting.

For the rim blasts, I used simple noise texture and set the UVs in one axis to 0 creating the stretched effect, i then followed with some smaller white blasts to try and give the effect a bit more oomph.
I’ve also added some smoke and a ribbon trail to the meteors, the smoke is just a dulled version of the one previously shown and the ribbon is a fire spritesheet from embergen.

Gonna call it done now, since my last post I’ve added some more flair to the explosions and general polish. I also threw together a quick environment to showcase the effect.

Here’s a quick reminder that this Challenge closes this evening! Don’t forget to submit your final video to JangaFX using this Form if you’ve yet!

For the full rules and instructions, visit our original post here:

[02AnnouncementPost_v02] JANGAFX PRESENTS: BOMBARDMENT, AN EMBERGEN CHALLENGE. It’s Launch day! The subject for our Embergen Challenge is: BOMBARDMENT! Whether planes are dropping bombs, giant ice shards are falling out of the sky, or a planet is being bombarded with lasers, the topic “BOMBARDMENT” is open to a wide range of interpretation and we can’t wait to see what you come up with! Please see our initial announcement thread for details on how to get your free 2 month EmberGen license f…