I need help with my camp fire!

I am currently trying to learn how to do awesome fire VFX with fluid sims and use them in Unity! For that occasion I had a look at the unity particle samples since they had really cool looking fire vfx ready to to be dissected. So, I created my fire flipbook and just edited the existing sample a little bit to match my texture. The result looks really good in my opinion and I am very happy with it.

My fire in the SRP setup:
https://imgur.com/a/iwQNMpP

Now, I noticed that the render pipeline in the settings is set to SRP and the shader is a default shader:
https://imgur.com/a/TKsgauD

But, the projects I am usually doing VFX for use either URP or HDRP. So, I was trying to understand the logic behind the shader and do something similar, but I am failing at it in a spectacular fashion. My attempt looks nothing like the one I am trying to get and that’s the point where I realized I need to ask for help on this. The shader in HDRP loses a lot of the details in the color and it makes the whole effect look a lot cheaper compared to the SRP one.

And here’s the shader I created in Shader Graph: 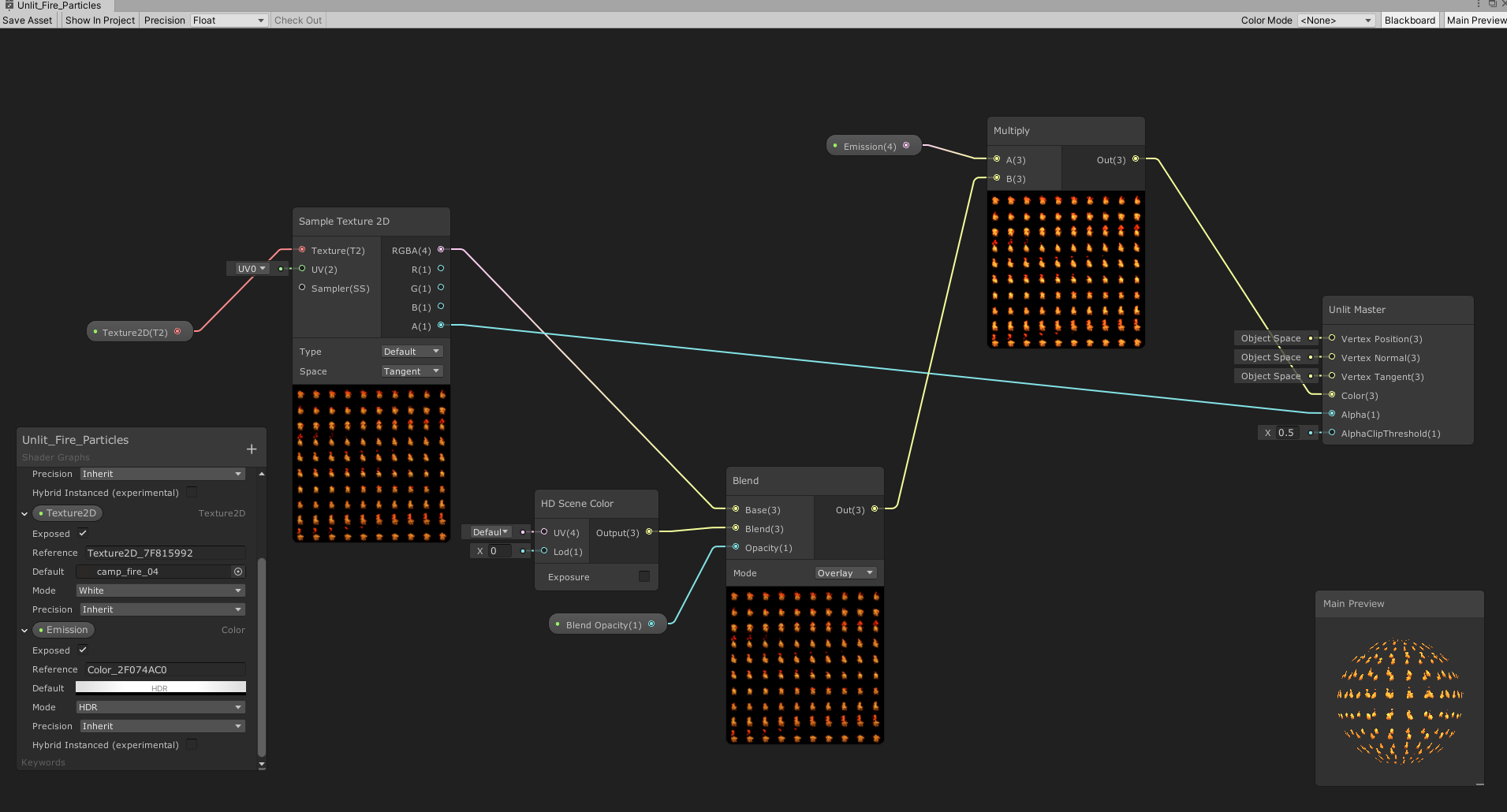 I tried using different blend modes and different "Blend Opacity"s plus various amounts of bloom, but the material always loses a lot of the beautiful details from the fluid sim, it’s a shame!

How can I get closer or hopefully the same result as in the SRP-Pipeline? Is it possible with Shader Graph or ASE? I hope some of you wizards can shine some light on this for me

In the original FX, it use overlay mode, which means the bright pixels go brighter, and the dark pixels go darker. As you can see, the color of the fire is almost white at the center, and red/orange at the outside. Your HDRP version actually didn’t lose any detail, it preserves more detail than the original one. It looks cheap because the color fomular you was using was wrong, see the correct one in this link

Blend modes (alternatively blending modes or mixing modes) in digital image editing and computer graphics are used to determine how two layers are blended with each other. The default blend mode in most applications is simply to obscure the lower layer by covering it with whatever is present in the top layer (see alpha compositing); because each pixel has numerical values, there also are many other ways to blend two layers. Most graphics editing programs, such as Adobe Photoshop and GIMP, allow ...

Solution? I suggest change the fomular arcording to wiki, use better background color. Replicate exactly the FX before doing anything else. Hope that helps