Do VFX artists get involved in character animation and blueprint systems? (UE4)

Apologies if this has been covered in any nooby threads, I just haven’t seen it spoken about. I am wondering if Game VFX artists have all had to learn how to create sequences of Character animations and how to trigger them in bluebrints and player controls in UE4?

Not just the character animations but also creating Projectile blueprints, and triggering those with animations too…

Say I wanted to create a set of particles for a sequence of animations for an archers ability, let’s say these are as follows…

As I understand it, in a company an animator would animate the character and a gameplay coder/designer would hook these up into blueprint for an ability for example, and the VFX artist would either be able to hook the effects into the animations using notify events, or they can be triggered by blue prints by spawning the emitters… (please correct me on this if I am wrong! I assume different size companies work in different ways)

However, if you don’t work in the industry as a VFX artist and you want to achieve something like this yourself for a portfolio, do you basically have to learn all of the above? or are there resources out there that you can plug VFX into… I have had a look but haven’t managed to find anything substantial beyond UE4s free animations, which still involves learning about state machines and blend spaces (Even the Epic tutorials on the Paragon assets and hooking up their animations started to make my brain melt)

To clarify, I am happy to go and learn this stuff, but really I don’t want to if it ends up being useless to me in the future, and to be honest it would take a fair bit of time that ideally I would like to be spending on improving and creating VFX… animation really doesn’t float my boat, hence just thought I’d ask if it is just a necessary evil when initially creating a portfolio, or if there is another way around it.

Any insight/advice would be great, thanks all!

Most of the time you are not interested in acctualy having a functional gameplay character just for showcasing vfx. If you have a look at the paragon assets, you can find drag and droppable anim assets that just play on start or simulate, attach anything in the notify of these to make them play. 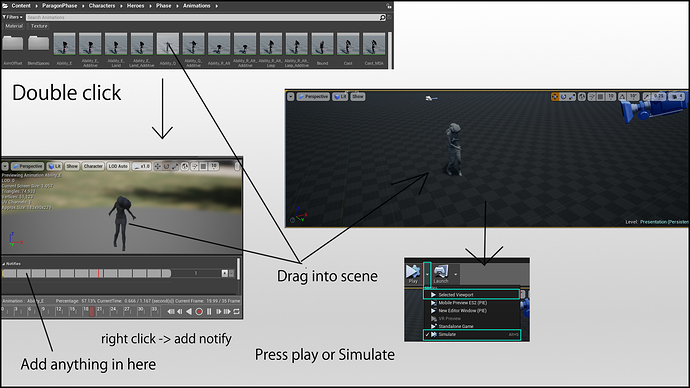 Yeah I guess what I am trying to say is when I look at some portfolios on youtube, they very rarely just use one animation on its own… and these often make for the most interesting effects imo…

Here are some example of portfolios that seems to use multiple animations chained for one full effect… or am I just being stupid and the animations they are using are just one long animation asset? They seem more like combos to me…

A lot of the animations I’m seeing here look more like long animations then combo’s, but you could always script some animations together in blueprint, although no company expects that kind of animation complexity on a vfx portfolio I think.

Any effect can be interestinging, often the limitations you are stuck with allow you to be more creative though, so don’t be afraid to limit yourself.

If you want to create a set for archers, why not take one of the paragon archers, just select some of the animations, put them in a row next to eachother, and try and create an appropriate effect for as much of them as possible?
If you aren’t happy showing it off like that, you can still stack them and enable disable the effect at set intervals in blueprint, but I don’t think that is nececary.

Cool, that’s what I was worried about, so thanks for putting my mind at ease

Here’s a good tutorial on how to attach particles to your animations via the add notify system @Wyvery shared.