Cartoon Vfx has always got me excited because of the diversity in textures and particles you can play with. As everything in cartoon gives us a colorful, rich and exotic sight. The beautiful landscapes, explosions, mysteries, magical stuff offers you a lot to create fascinating stuff. The sur-realism in cartoon offers some extra advantage to create the exciting stuff.

I came across with Legend Of Zelda: Breath of the wild fire and explosions compilation video and the effects I saw there were simply mind blowing. In this theme of video games, I can safely say that Zelda ones are my personal favorite. The different explosions during, cooking smoke, fire all combine perfectly well with overall environment of the game and character movements and it feels top immersion. 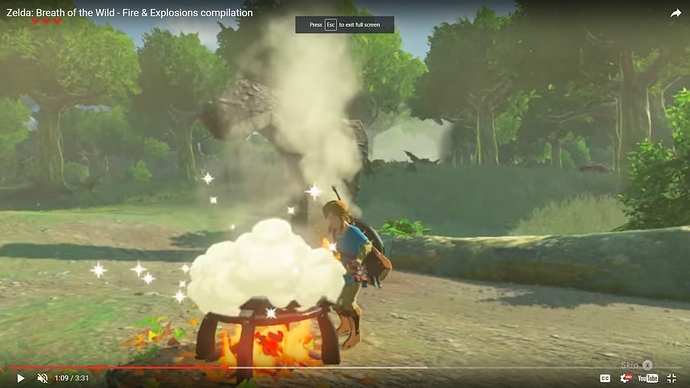 I really liked this cool effect, fire below and something is cooking out of cartoony smoke with stars. Adds a lot of value to the entire environment and graphics of the game. So keeping to just this reference, I have made two effects the Cartoon Blast and Cartoon Fire. I won’t call them an exact recreation of these similar effects which I didn’t try but just as a reference.

I have used four emitters to create the Cartoon Blast and named them as Smoke, Stars, Fire and outline fire. Then created four textures for the asset library. As it is an explosion so used somewhat darker texture for it. The stars creation was fun as I wanted to give it the classical old school cartoon look and out of nowhere somewhere related to Indiana Jones old games. Once I made sure that I have all the assets in place with classical looks which I wanted, the next step was to change the emitter properties and particle behavior to achieve the blast.

For the cartoon fire, Three emitters have been used and timed with different behaviors and for that I had to put an attract force that allows to generate the flames above through the editor to make it a fire 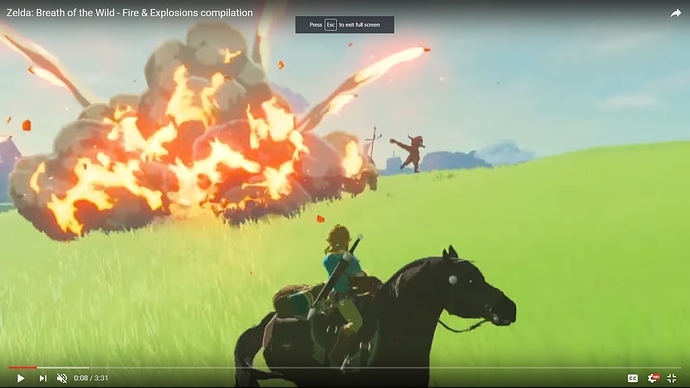 This blast is amazing, Its such huge with debris and trails along after the explosion. Kudos to the art team of Legend Of Zelda. They have really an amazing job.

With this reference, I saw some of my work in the my library as below:

This was quite challenging and fun to make. It contains multiple Super emitters with ref emitters. For the Debris, 3D model has been used. Glow textures have been attached with respective emitters. The puff smoke is backed with texture and shader.

Would love to see some similar work here by you guys.

Very cool, thanks for sharing your experiments! For me the most successful of your pieces is the explosion. The quick burst followed by the slow falling debri feels nice. Also the faked lighting in the clouds is very nice.

There’s another topic where @Luos_83 showed a cool “speedcreate” of a Zelda inspired effect too. You can find it here:

Also in our resources we have a few good posts that have FANTASTIC REFERENCE if you’re looking for some more inspiration:

I was inspired to work on another portal idea while working on the portal challenge and figured I would post the WIP here to keep it separate from the VFX sketch entry. This portal is a mirror portal to another place. I ended up playing around with some flames and liked the juxtaposition of the fire in the immediate vicinity of the portal and the rain where the portal takes you. I’ll probably try and polish up the entry of the portal image a little instead of having it just fade on and might …

I thought I’d share something else I’ve been working on, tell me what you guys think ( this is realtime ) here’s a quick breakdown soon, Just waiting for some time to do it, here’s a quick explanation: I’m using PopcornFx editor, it has a feature that lets me use Spatial Layers, which basically lets particles react to each other ( if we want ) and in the Abstract Fire, I used only one texture, but we can push this a bit further, and that’s what I did in the Matrix Fire. I’ll be Giving a ful…

I’ll kick this off with all the mixed 2D FX reference I’ve collected. Currently, there are 169 pins on this board, with more to come. https://www.pinterest.com/Keyserito/2d-fx-mixed/ I’m curious to see what sorts of reference everyone else has gathered. This would be the place for videos or images that have a bit of multiple elements. Please add anything you find to this thread, so we can all partake in the awesomeness :^D

Also I don’t know if you’ve come across Jason Keyser’s tutorials yet, but they’re some of the best stuff out there for stylized shape language: https://www.youtube.com/user/jasonkeyser/videos

One of my favorites is his “Shape Style Guide”: https://www.youtube.com/watch?v=hQDQLS_gNXM

Anyhow, looking forward to seeing more from you! xD

If anyone would want to recreate the Zelda effects they really should read this article series:

@Ali good effort but there is more complexity to those particles than only painted textures. I’m sure you’ll be able to figure this one out with this help!

@NateLane Thanks for some cool links and appreciation, I will certainly look at those

Saber & Archer reminds me of some good MMORPG and that is separately a different line of amazing effects and liberty for an artist to play around, thanks for the share. Yeah that the fake stars in Cartoon blast, I gave to try having the classical old school look to that cartoon explosion, somewhat we used to saw or still see in some of the famous cartoons and on the other hand out of nowhere it reminds me some of the early versions of Indiana Jones games explosions which is one of my favorite old time game series as a player and gamer. The explosion with debris took the most effort and thought to create.

I saw the digital fire effect you did in unreal, It was really nice, I hope to replicate my version of digital fire soon and would love to share with you guys.

Here is another one, tried to give it the same classic cartoon look with no Fake stars this time, Three different textures, the yellow cloud, red cloud and firestar, little flair of debris added to this look.

Like the soft feel of this, very nice! The soft shapes behind all the sharper shapes gives it a nice feel. I think i’m seeing a black outline around your spiky texture, or something that looks like it’s outlining it. Perhaps it would be worth taking another pass and cleaning that texture up

Sure, Will give it another pass

Here is the quick pass with no black shading this time

Yeah surely mate, There seems a lot complexity involve there but its an amazing work on Zelda. Such stylized hi-quality effects. Would love if some artist from the makers of Zelda bump in here and shed some light on the formation of effects of this beautiful looking game

Your blast sprite (spiky star thing) should grow outwards and dissipate (either fade or erosion) rather than shrink inwards since that is the opposite direction of an explosion. You’re illustrating an expanding force, having elements go inwards contradicts the rest of the effects.

Yeah its just one of those cases, Just tried to show a burst in 2d cartoon style with sparks going inwards

Fair enough, if that’s what you want then go for it. Have you got any reference/concepts that you’re working from?

Yea just tried one of the styles here, Took some references from Random Cartoon blast searches from Google, I shall try the outer going pass as well sometime soon, Working on some other burst effects, Will share to have a feedback.

Tried to give it another shot at burst explosion, Somewhat a combo of realistic and stylized, Turned out to be good I guess

And This just a burst cracker with one emitter quickly:

These are the two last ones addressing for now, a Muzzle flash cartoon and magic slam ground. I should heads up for Dragon Breath quickly now. Would love your feedback and suggestions.

Hey, i m new to vfx, can you show me how the node work?