now I’m curious what other cool ideas are out there because other than this and a revolved mesh I’m out of ideas.

Wow, this looks so organic and 3 dimensional! Definitely gonna try this out!
Can you explain more about the remapping part? what exactly is the math doing there

I need to put more time into finding new ways to use it, I’m too into this 1 use and
rotating the previous panning texture 90 degree +a purple hue shift gradient

It’s like lerp, but instead of mapping 0-1 => Min-Max, it maps InputMin-Max to OutputMin-Max

Oh thanks for the breakdown! I missed the part where you uses polar coordinates to feed in the remap node so I was confused, thanks!

Ahhh that’s such an easy way to explain it. I’ve always just used power and multiply to add contrast to a texture, will try remap next time!

just a note, we’ve a huge polar-thread here: How do I make a radial UV texture coordinate map?

it is a problem; you have to disable mips

Bgolus noted that here disable mips or you get a horrible seam, as for point filtering I was able to leave it bilinear in most views.

you guys just gave me the silliest idea… how can I keep mips?
Im using 2 textures anyway, what If I rotate 1 and LERP them with 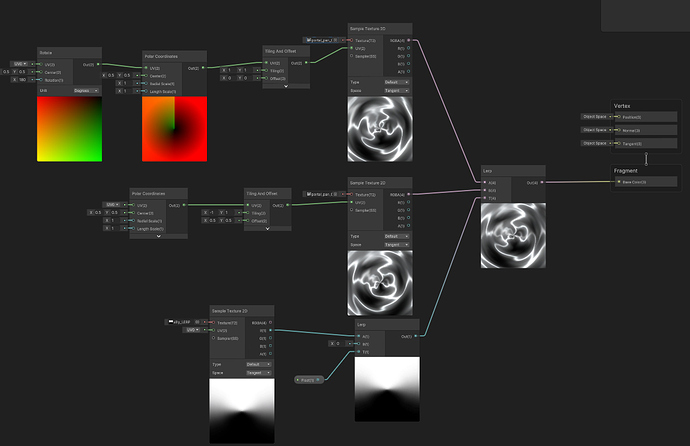 it works, here I am sliding the LERP On vs OFF

Can you input explicit derivatives on your texture sampler? Here’s an unreal example:

explicit derivatives on your texture sampler

do not know where to learn that in Unity

Somewhere in the unity forum is a post by bgolus (and only a few posts back in the thread bruno posted) in which he explains exactly what bruno is proposing. You calculate ddx and ddy of the regular uvs and use a different sampling function tex2dgrad() instead of tex2d() (which isn’t a node in shadergraph for some reason, but you can simply use it in a custom function node).

unfortunately this goes outside my skillset.

I found one about accessing mip levels in the frag
https://forum.unity.com/threads/calculate-used-mipmap-level-ddx-ddy.255237/

So maybe if I tell the frag what mip is used that could work too? Shader graph has a LOD sampler and override the mip manually

wait a second would that work? it works?!

but is it okay to do that? i just leave it at 0 and that would mean it is unoptimized from far

using tex2dLod to set a specific mip level does indeed get rid of the seam too. I would not really worry about optimization, yes you keep using the highest mip level but I would argue that you would not spawn such an effect incredibly far away or heavily rotated away from the camera. But you might get some artifacts because you dont sample the downscaled mip versions (again there is an excellent medium article by bgolus about this xD)

sorry calculating ddx and ddy sounds needlessly complicated. It is very much just recreating the setup from bruno UE screenshot in shadergraph and the nodes are nearly the same. I didn’t want to blow this more than necessary but I am very happy that you were inspired and figured out some more approaches. The morph in the last gif looks great.

If you’re doing twirly flames polar coord are probably best. If you’re going for a different look there are a couple other ways to push pixels from the center of a plane.

You could zoom in on a texture and swap it in and out like a flowmap.

Or you could pan it out from the center at various angles. Which makes it look like a kaleidoscope.

Nice Radial UV Shader: https://twitter.com/Cerva_saiki/status/1584282244943781888
(they seem to get rid of the seam by lerping another texture in. this also makes it nicely tilable)