Hey Everyone! I wanted to post some personal WIP that I have been trying to get in the habit of doing more regularly. These are a few things I have been experimenting with recently. Any feedback is greatly appreciated! If anyone has any questions I will certainly try and answer them as well!

The first effect is a sort of slime river. I really wanted to make some 3D popping bubbles for some reason and needed something to put them in, so naturally thought of a slime river!

The second effect is a stylized mesh explosion. For this one I wanted to try and make exactly that, a stylized explosion that uses a mesh instead of a sprite.

I’ll update here with any further VFX experiments! It is truly humbling to be a part of this community, so much awesome and inspiring work here!

Your slime is super successful! What was your approach for the water ripples and stream? It looks so good!

Yeah, how did you do it?

The explosion’s firey bits should persist more (have some firey bits dissolve into the smoke).

Thanks! The slime effect was created through a handful of static meshes with vertex animation in their shaders. The meshes that compose the main effect are these guys: 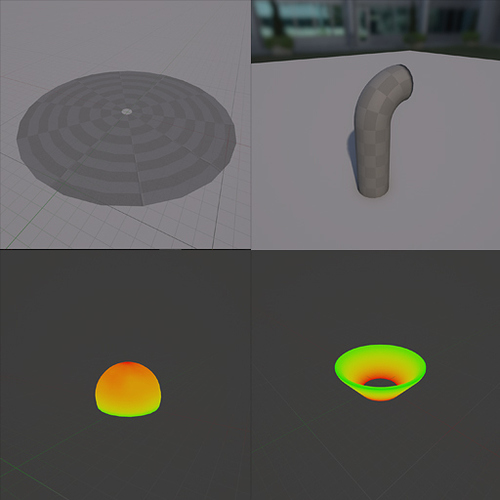 For the ripple and the waterfall, which are the two top meshes, I ran a few random sine waves through them to create the vertex movement at the same general speed as I was scrolling the textures through them, clamping the movement with masks where I didn’t want it to move as much.

For the bubble and the splash impact I used the same general idea but added in some vertex color to the mesh to control the movement of individual parts a little more precisely. For the bubble I have controls in the shader for width of the red portions separate from the width of the base, which I wanted to stay put, as well as controls for the overall height of the bubble. Then at the peak state right before it pops I run some random noise through the verts to try and get some variance in shape of the pop. All of that stuff is animated in the particle system. The splash was done with random noise running through the verts of the splash mesh to try and get some random blobby impact motion. 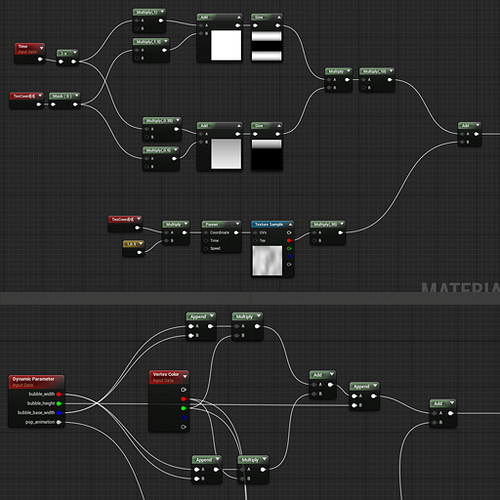 Above are some examples of the vertex offset. The top one is from the waterfall and the bottom one is the set up for the bubble pop.

Let me know if that doesn’t answer your question!

Oh wow great. Thank you for the breakdown!
Material looks neat and clean, a lot of bang for the bucks. beautiful!
Will study later on.

I was inspired to work on another portal idea while working on the portal challenge and figured I would post the WIP here to keep it separate from the VFX sketch entry. This portal is a mirror portal to another place. I ended up playing around with some flames and liked the juxtaposition of the fire in the immediate vicinity of the portal and the rain where the portal takes you. I’ll probably try and polish up the entry of the portal image a little instead of having it just fade on and might do some minor tweaks to the flames.

As always, any feedback is greatly appreciated!

Sweet colors and awesome composition with the red and the blues, some weird fire clipping on the base of the mirror.

Did you also make the environment yourself?

And thanks for the feedback! If I may ask, what fire clipping are you speaking of specifically? There is a layer fire coming from the rectangular base of the mirror, are you referring to that? Maybe I should put down some flat fire on that base to help with that issue/give the flames some sort of base. Or are you talking about clipping that occurs with the parts that are holding the mirror up that aren’t the rectangular base?

Regarding the environment, it is a few 2D images parallaxed in the shader. I painted and pieced together some photos I have taken to create the environment and added in the rain, fog, and blinking lights to further sell the illusion. It will break down a little at certain extreme angles, but gets the job done for the most part!

I was refering to this part. I feel it just looks a bit bad when it just goes straight through, very minor detail

That environment effect really have great sense of quality, sometime in the future I really need to look into a similar effect!

Ahh yeah I see. Thanks for the screen grab! It is always helpful to get another set of eyes on something! Yeah I will look at that clipping in the next iteration, should be a quick fix.

Thanks! I tried to add in a few more parallaxing elements, like a blurry post in the foreground but it didn’t quite pan out the way I hoped. I might take another stab at it however. I also set up a true portal into another scene, but that seemed like more work in creating a completely different 3D environment, so instead went the parallax route.

Spent some time today working on some stylized fire experiments without the use of flipbooks. Figured I would post the results here! These all use the same material with texture swaps and parameter changes. This is the same material used in the mirror portal video posted above.

Any suggestions or feedback welcome!

Wow, I would like to see how your materials are setup to create the fire wiggle the way it does.

Currently I feel like the fires do look like fire, my concern is that they look a bit stale, but in some cases I think that be a good thing (torches, campfire example)
For being just 2 textures (I assume you mask the fire) it does seem to be very performance cheap which would make great in mass producing environmental fx for different scenes.

Thank you for sharing

Thanks for the feedback! @ChrisNordgren

I hear you regarding them looking a bit stale. My intention was to create something stylized without a ton of crazy movement in hopes that it would come together more fully within a particle system while still maintaining a somewhat stylized look. I’ll see how far I can push this in future iterations.

Regarding the wiggle, it was created based off of a trick fellow VFX artist Dare Matheson showed me. It is a UV offset that is distorting the U by using vertical sine waves that pan upwards. It looks like the following in it’s most basic form and can be used for UV offset or vertex offset: 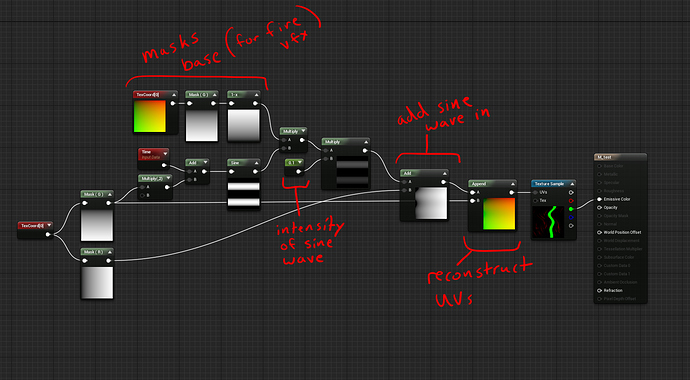 Now you can beef that portion up by adding additional sine waves into the mix and providing controls to alter the height and width of the texture as well. You can lerp two sine waves of different speeds and length by a third larger sine wave to get some nice variety or provide controls to blow the fire in a certain direction to simulate wind using the same principles (for this you could use a float, multiply that by a similar mask that masks the base, and add this to the sine wave right before you add it into the R Mask. A negative number for the float will push it one way and a positive number will push it the other way).

As far as the look of the fire, I use two textures to form the basic shape. One that serves as a sort of blob fire with no holes in it and another that acts as the mask and defines the detailed shape of the fire (just as Chris guessed). The masked texture scrolls upwards and both have the same UV wiggle distortion added to them. For further variation you can add a little more random (non wavy) distortion to the masked fire to help change it’s shape a bit.

Let me know if that doesn’t answer your question or if I can better explain anything!

I’m continually playing around with this method and will post any updates if I am able to make any improvements to it!

Love it! The slime has such a cool style! Great work and thanks for the breakdowns

Sam - this stuff all looks great! I love the graphical fire, for example bottom row / 2nd from left. Looks superb how the tendril breaks off.

As many people have said, the VFX in Zelda - Breath of the Wild are nothing short of stunning! They are really inspiring for those of us interested in stylized VFX. I found the fire particularly inspiring (I am on a fire kick recently

) and I wanted to try and figure out how to replicate that and create something with the same look and feel for learning purposes.

Just like the previous fire experiment I tried, this fire doesn’t use flipbooks and is shader created. Below is the first pass. There are a few things I want to iron out in regards to the movement, tiling, and a little blip that happens here and there. It has been a lot of fun to try and break that effect down and figure out how to create something with the same/similar style and movement!

Really cool Sam! Thanks for sharing.

Worked a bit more on the Zelda inspired fire study tonight. New video is below! Tried to capture a bit more of the random movement you see in the gameplay videos and improved the colors.

I updated the fire VFX on the mirror portal and thought I would post the final version here. I think I am calling it done playing around with fire

Going to try and think up another VFX experiment to work on next. Potentially another portal, haha (maybe a demon portal or something Diablo/Doom inspired). Or maybe some kind of laser blast or aoe effect.

As always, any feedback or questions welcome!