Can someone explain to me why UE4 uses such crap names for its particle nodes and inputs? 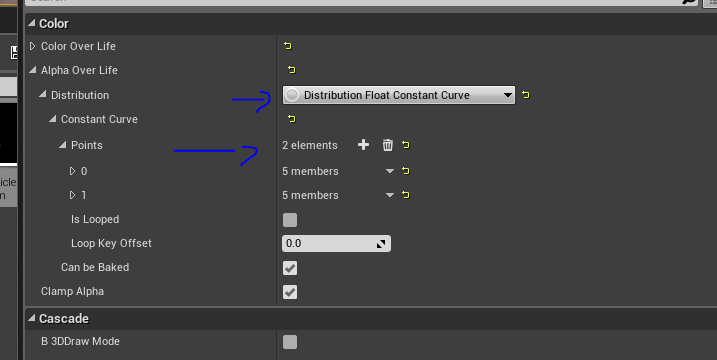 All I want to do is set the particle to fade up to max alpha and then down again at the end of the life, coming from Unity this was very easy to pick up. UE4’s systems seem to try and make it as difficult as possible.

I understand it probably very flexible, but i really hate touching it so far…please explain to be the positives?

I think the positives are you got to learn to use stuff you aren’t always going to like? I don’t know. I didn’t have an issue like that, but i learned unreal 3 first before going to unity, so my curve may have been a little different. Referring to Unreal’s docs can help explain a lot too though.

Don’t get me wrong, I understand it. but they seem to have tried to make it as difficult to follow as possible. It feels very much a tool written by a programmer. “DistributionFloatUniform”!?!? pretty sure they mean “Range”.

Yeah I get what you are saying. It took me a while to understand the concepts of the terms. I think Bill Kladis’ went over them really well on his cascade beginner series on 3D Motive, and I didn’t fully grasp it until I went through those. Also just in case you did not notice, you can click the graph icon on the color over life module itself to show and edit the graph vs punching numbers in.

Some advantages a really like about cascade though is being able to do math instructions inside the editor, so if you have a value of 17 or something and want to half it you can type 17/2 and hit enter and it’ll do the math for you. Makes iterating very fast!

It feels very much a tool written by a programmer. “DistributionFloatUniform”!?!? pretty sure they mean “Range”.

Something tells me the chances that it was written by a programmer are very high.

Snide remarks aside, there’s absolutely merit to naming things in accordance to what they are, rather than how they conceiveably might be used. I highly doubt it came from an intent to make it “as difficult as possible”.

If you’re looking to make suggestions to the team behind UE4, I fear this forum might be the wrong audience. They have a feedback forum where your concerns might make more headway.

i’m not looking to make suggestion, just seeing if anyone else feels the same pain…

It’s like the triangle we used to refer to.

Pick two. I have yet to find an engine that has great UI, great functionality and great performance.

I totally feel your pain @Alcolepone. I have postponed my Cascade studies for so long because I feel so dumb when it comes to all the math and akward UI. But I think as Chris said, “… naming things in accordance to what they are”. I am right now at the same extremely frustation point where nothing makes sense and I want to give up…again, but I’m pushing and trying…
It was interesting to see this topic, I think you are exactly at the same frustration spot where I am right now.
I am studying through these tutorials - http://3dmotive.com/series/udk-cascade-beginner-s-guide.html and http://3dmotive.com/series/sparks-embers-and-collision.html

But yeah, I feel your pain. You’re not alone. =P

Some advantages a really like about cascade though is being able to do math instructions inside the editor, so if you have a value of 17 or something and want to half it you can type 17/2 and hit enter and it’ll do the math for you. Makes iterating very fast!

Just wanted to point out that this does work in Unity as well!
Basically any number field, including the particle ones, can have a math expression entered and it will calculate it on the fly.
It’s not documented at all though as far as I know, it’s a secret trick

It does! I feel like I tried it before in an older version and it didn’t or i thought i had tried and just don’t remember. Thanks.

I don’t have so much a problem with the naming conventions that Cascade uses, but rather the fact that you have to open 3 or 4 tabs just to get at the value you want to edit. That’s a pain.

that’s the type of things i’m on about. Why is it still like that?