What does this setup look like in the Material Editor?

I’m not sure I understand your question. Are some UV shells not assigned on one UV set or the other? 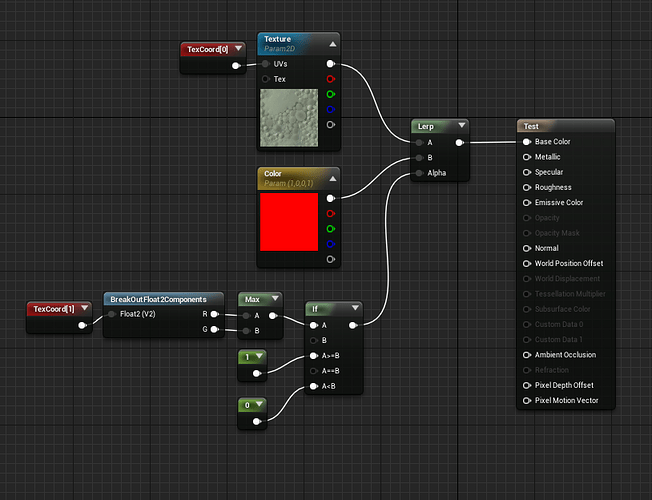 This works by assuming that any faces you don’t want to be the solid color have both their U and V component as being <= 0.0 in UVSet_2. If this isn’t the case, it won’t work. I’m using an [If] node here because it is built in, but the hlsl step() would be preferable.

Keeping this in mind, I don’t think this is the best way to do that type of separation. There are a lot of ways you can use UVs or textures to isolate certain faces, and this one is messy and hard to follow. But it should work.

I don’t have Unreal in front of me, but the “Texture Coordinate” node has a UV Set dropdown list that should allow you to select which UV set you’re reading from. I assume there’s probably some options on import that need to be set to use them as well.

I do want to ask though: [quote=“jettam, post:1, topic:840”]
the other I just want to assign a constant 3 vector color
[/quote]
Can’t you just use your vertex colors for that instead? That doesn’t need a UV set.

@Keith, is correct. This sounds like a better case for vertex colors.

But I was thinking I could use one material and assign to one UVset a texture and to the other a vector color. @ryan.dowlingsoka just showed me a pretty good method for doing this by using a Lerp. The If node I dont quite understand yet, all in good time.

The only reason to do it as one material would be to reduce draw calls. Each material counts as another draw call. It is always a balance between the too many draw calls, versus too expensive materials.

The [IF] is worth knowing, just so you know how to read it.

Pretty much it reads like this:
(I’ve denoted the inputs of the node with [brackets])

The confusing parts are:

Also something to realize is that it is not like a CPU If statement. All of the inputs are processed regardless of which ones get used, so you aren’t saving anytime (despite what the tooltip says) by using ifs.