I’ve been stalking around here for a while giving feedback and keeping an eye on what people are up to but I haven’t really posted anything.
I’ve finally found some time now to do some work and I’m very excited to hear your feedback while finishing this piece and improving it. Please feel free to let me know what think could be done in a better / different way! 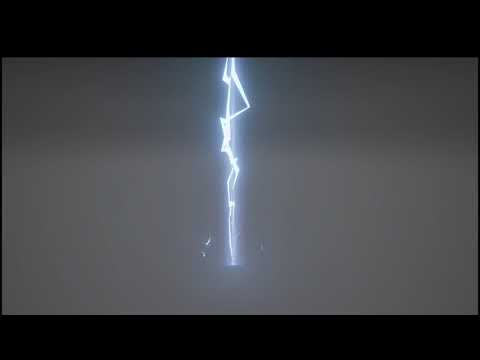 I did change it from being a projectile to being more of a lightning strike. It felt better, somehow.

I’m currently working on the smoke, shockwave and the lightning going in, out and around the smoke.

Looking forward to hear your feedback!

great after image!
I think the multiple smoke fades detract from its gesture.
The initial strike is a bit too straight?

Thanks William!
Good pointer! I agree that the smoke distracts from the main lightning. I’ll take a look at it and maybe that’ll make the bolt look better. If not I’ll see what it’ll look like if I make it a little crazier

It works when it helps reinforce the bending quality of the strike.
If the smoke took the same form as the lightning and then spread out, that would be better, i think. 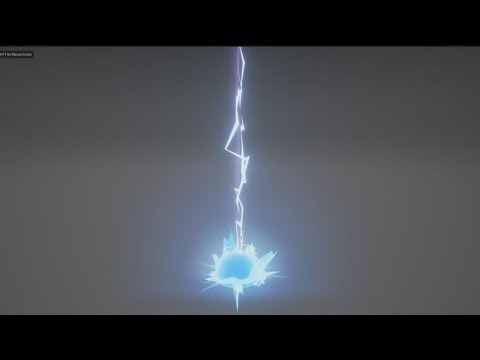 Added first iteration of the smoke and changed the timing of the lightning bolt and reduced the opacity of the lingering smoke that comes after the bolt. I think the bolt became a bit more prominent.

Let me know what you think! 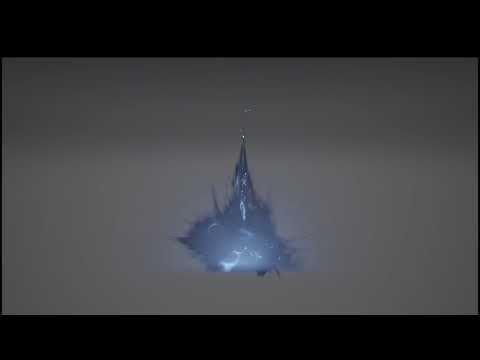 Worked a bit more on the smoke and timing. Painted in some internal flashes into the smoke and removed some of the effects around the lightning bolt to increase it’s visibility further.

Tomorrow I’ll keep working on the general feel and add some flying sparks and arcing lightning like in the concept. I’ll also start looking at a decal for the ground.

Way better! I like that you committed to laser. Before, it was indistinguishable from the lightning. Maybe push that difference further in hue? Get some split compliment in as a test? See what happens with a richer palette?

Oh, this is Awsome! And I am also making a lighting ball vfx! Thank you for share your WIP. I learn a lot in here!

Didn’t have as much time as I had hoped for today so not that big of an update: 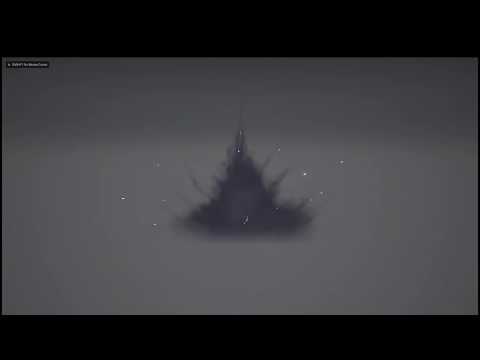 @William_Mauritzen, thanks! I’ve tried pushing it a little more. There’s some pink / purple in there to add a bit of more color. I also added some flying sparks and some bigger arcs of electricity hitting the smoke.

@Nevl_N Thanks! I’m glad you could find some inspiration in here! Your lightning ball looked really cool. A nice mix of motion there!

The embers are a great addition. However, either make them live longer and get affected by gravity or (preferably) add some more embers that do that. Right now the effect loses all momentum after the smoke has expanded. That’s a cool trick to use and make it feel more snappy, but it would look better if you had at least one element that kept going. I’m not suggesting adding anything fast or different as the effect already has a great attack and feel. Just give the eyes something to rest on when the effect starts fading.

Thank you! And a very good point @Partikel.
I’ll have a look at it tomorrow

See if I can tweak those sparky things and add a decal to connect the effect to the ground.

Hey man! Great job. Few suggestions:
Lightning is usually forking before it hits the ground, also just before it hits the ground you can see (in slowmotion) the electric thin line between sky and ground (it is the line that you made) but i think it would look more realistic if you make it the same shape as the lightning itself. (even if the effect is stylized)
Also when lightning disappears it usually happens with erosion of particles and not scrolling (it doesnt go into the ground like wave).

Even without the stuff above i think it looks pretty cool! Keep up the good work

@Stefan_Jevremovic, Thank you for the feedback! You gave me some new ideas I will try out and see if I can get them to work.

Gonna experiment a bit with the lightning in the beginning, like you said. I will add vertex colors to all the mesh arcs so they blend better as well and iterate on their shapes. Hopefully I’ll come up with something cool! 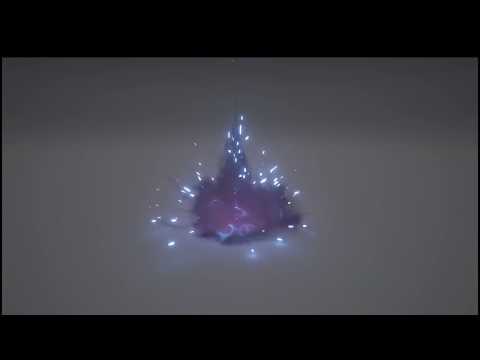 Thanks for that feedback @Partikel. Don’t hesitate to let me know what you think!
There are quick pink sparks flying off in all directions without drag or gravity that dies out really quickly and then there’s the bluish sparks that fly off and get affected by both drag and gravity. Then there’s also some other blue sparks that are a lot fewer but have a higher gravity set to them. The random range doesn’t give me an enough random value so needed to make a new emitter for that. (If there are other ways to do this I’d like to hear of those ways.

I also added the scorch mark which is a decal that I had to spawn and fade within a blueprint (This was a bit new to me so took quite a while). I will keep iterating on the shape of the scorch mark as I’m not quite happy with it but it serves the purpose of connecting the effect and covering some of the smoke blending with the ground. It also gave me an opportunity to have some stuff happen while the smoke faded out.

Next up is looking at the arcs in the beginning and iterating on the arc meshes to make them feel and look a bit better. Also iterate more on the decal. But I think I have most of my elements in there now at least.

Love watching these updates and thought I would throw some CC in the ring.

Perhaps have the smoke expand at the end, rather than shrinking inward. The sparks have so much power, the smoke would be a nice follow through on that energy.

Similarly the scorch mark could almost look like a molotov / cartoon impact in sense that it radiates from the center.

I would also suggest less lightning but more pronounced. At the moment it feels a little noisy, like it’s fizzling. I would recommend a one, two punch combo. Ie : Strike, pause, pop, pop, pause, pause, pop, pop. With the later two being slightly smaller. The silhouettes would read quickly and nice.

Thanks for the feedback @njhc ! I really appreciate it!

Hopefully I can post a new update tonight! You’ve given me some new ideas

I want to share my workflow on the smoke texture for this effect. I haven’t really painted that many before and I was really confused on how to go on about it but I finally got to it and I think it turned out alright. 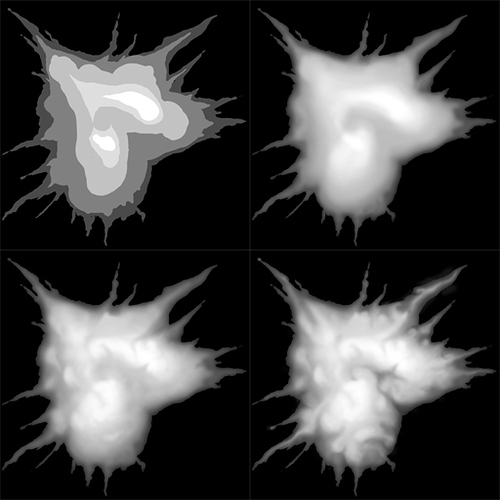 I knew I was going to make an erosion shader so I started painting with that in mind.
I painted big shapes and clear steps in the texture. The brighter the area, the longer it would stay visible once finally rendered.
Then I began blending the steps with a hard opacity brush. The softer the blend, the smoother the fade to the bright areas and the sharper the blend the longer that area would stay visible until it started to erode. Once this was done I did a gentle gaussian blur and continued to paint with a softer brush.

The last step was getting some swirly darker cuts into the shape that would give the smoke it’s puffy little shapes when it was almost completely eroded.

This is just one way to go about this kind of thing I guess. But I felt that I should share it in case someone finds it useful!
Feel free to cut out the final texture from the image and try it out.

Thank you for sharing how you made the smoke. I am trying to learn how to paint something similar and was about to ask how you did it. Great work on this effect!

I’m happy you found it useful!

Let me know if you have any other questions! 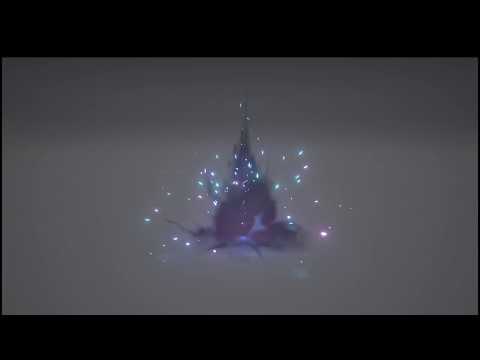 I did some cleaning up of the lightning and paced it a little differently. I also changed the timing in the initial strike and added a fading in lightning that has the same shape as the main strike. The decal is also a bit sharper, less round and spreads out slightly further.

Feels like I’ve been staring at this for so long now. Looking back on the iteration before this one… It feels as if the actual strike is more powerful. But this one feels more lightningy… >.>
I will have to take another look tomorrow.