Hi everyone! Been lurking on here for a while and been on the discord channel a little bit. I’m a relatively new VFX artist to the industry so I’m looking to push my skills a little and this seems like a great opportunity to test things out. I’ll see how much time I can put in, but I’m using this as a way to learn Niagara in UE4 as well as Embergen.

The general idea atm is I wanna blow up some podracer-style speeder things and watch the raining debris and engines pieces pepper the desert landscape underneath. Loads of fire, loads of sand kickup, and I can experiment with some jet engine flames. :’)

Newest pic: A storyboard for how I imagine the effect to play out 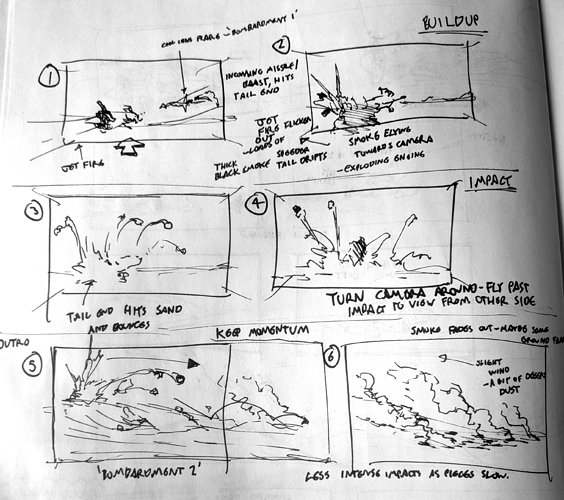 Making a start on some planning and reference gathering. Started a little youtube playlist here where I’m adding video reference. The main point of inspiration is basically the pod-racing sequence from Phantom Menace (especially the part where Sebulba’s pod flies out of control and he gets all sad)

Also pasting in a little bit of planning I’ve been doing in OneNote, nothing fancy yet and this outline will definitely shift around a bit, going to move onto doing some storyboard doodling now.

I’m pretty hyped up about this, looking forward to seeing what eveyrbody else is making too!

Got started with a bit of rough storyboarding yesterday, this page probably has the easiest to understand sketches but I apologize for the state of my handwriting. So what I’m thinking is some kind of missile or blast hits the tail end of the speeder (nothing too powerful, it clips it maybe but just does enough damage to the engine to make it catch fire and explode a second later) this will make the tail end dip, hitting the ground which will cause the speeder to tumble and fall into pieces. The camera will follow thorugh the action and turn around to see the destruction as it rains down.

I’m actually going to work on some technical tests with Embergen next, just come across a guide for 2d raymarching, never tried it before but going to see if I can use that to get some volume on the smoke in Unreal.