Emitter Start Times on a Curve?

Right now I’ve hardcoded delays into the various emitters that start pumping out particles as different points to give that additional layer/pulsing feel.

Can’t figure out how to have these emitters start emitting based on a time curve (0-1), or just a simply On/Off based on the incoming time variables.

I tried adding a “FloatFrom Curve” on the loop delay but didn’t seem to work based on the loop time. Another consideration is the emitters are set to infinite go keep the effect going after max charge, though this is where I may need to define that through a (“Max Time Before Auto Release”) variable.

I solved this by adding a Lerp Float to the Loop delay then using my TimeToFullCharge variable in the B slot. Boom 0 to 1 no matter the charge time. 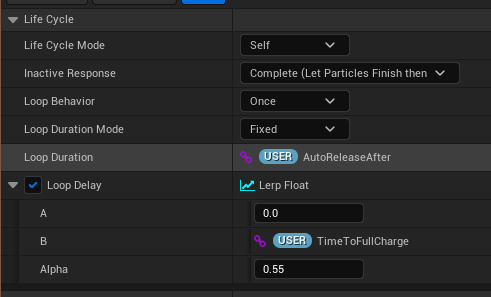 That works but (unless I’m missing something) since you are lerping from 0 to TimeToFullCharge you could probably get the same result just by multiplying TimeToFullCharge by 0.55, so using a “Multiply float” input rather than the “Lerp Float” one.

Not that it makes any real difference, just for the sake of simplicity.

Yep didn’t think of that. Yours and sounds more efficient.