Hey folks, so I was creating some light swoosh sketches in Unity, but I struggled a bit with the large soft trail part.
I wanted to create a setup which would work for winding motion paths from a 1st person perspective, but I couldn’t find a setup that looks:

This is what my final VFX sketches look like, to give you an idea of what I wanted to achieve:

These are the approaches I’ve tried, that I found to be not good enough:

I ended up using this approach, unfortunately it only works for a circular path:
Two intersecting cones - similar to the approach with two trail renderers, but since it’s a static mesh, I got rid of the billowing motion. It would look a bit better if I animated the the texture instead of rotating the whole object, but rotating the object was faster and doesn’t matter for this VFX piece 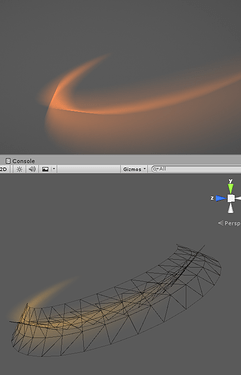 So I am wondering: Is there an approach that works better? Or is this something that has no perfect solution and you would just conceal the imperfect parts with the rest of the composition?

Thank you for your time!

Unity trails/ribbons does not have tooling to solve these issues easily without lowish level TD & programming, which is a rare skillset seen here especially because Unity lacks a wide adoption of technical contributors.

that said ARA trails is one of the more comprehensive upgrades…

pinching must be solved on the programmatic geo side and also to help solve quadrilateral / triangulation interpolation rendering issues.

unfortunately this just doesnt exist at a satisfactory level for the entire community… some places have these tools, but they are not shared

if you can work out cam facing on the vertex level for a shader than modeling a static arc shape where the shader can spin somewhat while avoiding pinching ‘would’ be your best practice. it may also require a softparticle concept if you anticipate an oblique view

this is why static soul’r-coasters are the most common i have seen in Unity teams (this is the same as your doughnut idea, but you pan the texture, not just rotate the geo)

Hey Torbach, thank you so much for your detailled answer, it definitely got me on the right track!

Somehow I never came across the term “soulercoaster” before, and I couldn’t find enough by “swooshes” or “soft trails”. A very helpful link, in case anyone else stumbles across this thread: Curvemesh | RealtimeVFX Wiki | Fandom

There is a way to create custom fresnel on a cylinder that doesn’t fade along the length of the mesh, only at the ‘sides’, if that makes sense. I learned this from an exceptional coiled telephone cable shader, of all things!

Here’s the link:
How To Create A Coiled Cable Shader In UE4 | by Ross Beardsall | XRLO — eXtended Reality Lowdown | Medium

We can do this by getting the camera vector from each pixel and transforming it from world space to tangent space. We can then evaluate the ‘G’ channel to determine the direction of the pixel for the viewing angle. From this, we can construct what amounts to another height map that spans the length of the cable horizontally.
Given these two height maps, we can then attenuate our scale value based on how close the pixel is to the edge of the cable, giving the illusion that the cable has rounded depth.
We found this method to be much more reliable than using a fresnel function, which broke the illusion at certain glancing angles.

Back to the subject of trail rendering…

Frankly it’s the one of the most disappointing aspects of working with Unity to me. The poor line rendering functionality that is really showing it’s age constantly throws up roadblocks with UV’s, camera facing, and limited implementation with particle systems. I’ve yet to find a satisfying solution.

That link is a precious resource. I tried his method but don’t seem to work, could you please guide me how did you replicate this effect?

What exactly is it you need help with? The fresnel part?

Oh thank you for your help but I figured it out. Instead of using Green channel like Ross said, I used Red channel, the result is amazing.

@fearian Thanks a lot for your post, much appreciated! I tried it shortly after you shared it, but just now came around to write a proper response to this thread.

Ross’ approach is very interesting, as he’s using vertex tangents (as opposed to fresnel which uses vertex normals) - if I understood it correctly.
It took me a while to figure this out, because a default torus mesh (in Maya at least) has differently aligned vertex normals than a cylinder mesh. 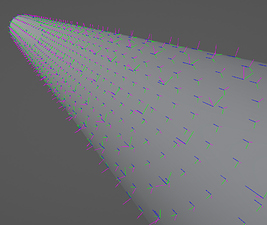 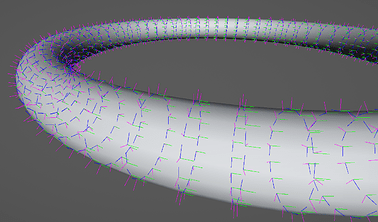 2022-03-12 16_05_26-Window1209×711 536 KB
Vertex normals, tangents and binormals of a cylinder mesh and a torus mesh. Tangents (green) are oriented along the circumference of the cylinder. If you think of the torus as a bent cylinder, the tangents are oriented along the height of the cylinder instead of its circumference.
(I used a free, handy tool by Feng Tang to visualize vertex normals, tangents and binormals in Unity.)

Therefore using vertex tangents in the shader looks correct on a cylinder, but it doesn’t on a torus: 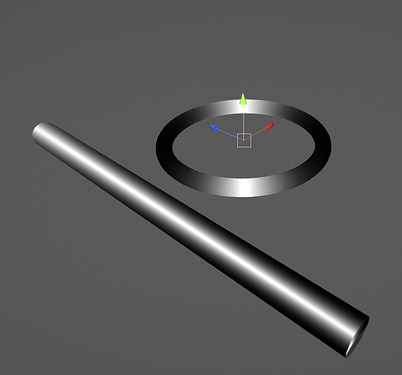 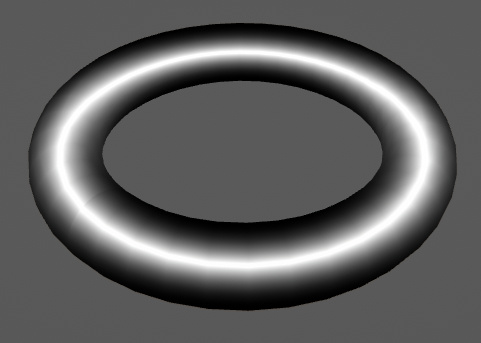 So yes, plugging Ross’ approach into the opacity of a shader to create a soulercoaster is more stable than using fresnel for opacity, but if you put it on a cylinder which from a certain perspective overlaps itself, it’s also not ideal: