Hi guys! Trying to finally do my first post here with some WIP work o// - Ill most likely keep everything in this single thread as I go through my months of learning VFX o9

Here’s a little canon shooting, I’m only taking care of the VFX. The engine is a custom one made where I work and I’m trying to learn to do VFX while getting familiar with this engine at the same time (I only used unity before!)

I’m trying to keep a “stylised” / cartoonish feel without going too much into it (but I’m struggling finding consistency and determining how stylised or not I want it u_u).
STILL I’d love some feedback, especially on things like pacing, rhythm and shapes. Hope the gif will read correctly…

Wall of text incoming! Scroll to the bottom for a TLDR;

It’s a nice little effect you’ve got, there’s nothing inherently wrong with it per say. Personally for me, having dealt with weapon FX a lot over the years, it’s missing the “Punch”. Even though it’s stylised, you really want to sell that explosive combustion! Don’t be afraid to go a bit nuts with the muzzle flash, it feels a little bit lack luster at the moment as there’s only a few frames where it’s really seen and at that point it has already started to break up. A muzzle flash should be almost instantaneous lasting only a few frames and within those frames you want it to be big, bold and bright! The light itself lasts too long, as does the muzzle, make it bright and make it snappy. It’ll really help sell the weight and punch of the cannon firing. The side smoke exiting the barrel comes in too late for me and it dies out too soon. Try having it come in earlier just a frame or two after the muzzle and have it linger a bit longer; try an extra half a second or so. Throw it out sooner and then drastically reduce it’s speed, this’ll help sell the force behind the ejection of the smoke; Try utilizing Drag. I really like the light grey ribbon you’ve got for the projectile, it’s got a really nice fluid fade to it. The style of it with regards to the rest of the smoke is contrasting though. I’d either go for the light grey clean lines, or the dark grey soft smoke; i don’t think both work. If the dark grey smoke is supposed to represent unspent gunpowder streaking off the cannon ball then the projectile path being laid out by the light grey smoke should come behind this. Imagine contour trails off of a plane.

Best of luck and I look forward to seeing how it all pans out!
Feel free to hit me up if you need anything.
Ryan

Aaaah thank you so much for that much input!!! Im gonna read over all of this again carefully and see how to best apply it all

and come back with an update

I’ll have to figure out how to record the effect better too, the gif reads slower than the effect actually is (but I believe most of the feedback you did is still valid, no matter if the playing speed is a tad slow)

Hi everybody! It’s been months and Im still swarmed in both making FXs for our project, and learning to do FXs at the same time (and finding ways to adapt unity/unreal tutorials to our in-house engine).
I’ll try to take the time to come ask feedback for more character skills, but for now I thought I’d just share the slight changes I made on this canon shot, and see if I managed to adress @stripysniper’s feedback!

I havent touched this FXs in weeks, so I might just do that if I get more feedback on it here!
Im also afraid gifs arent the best way to show off FXs since the timing gets wonked out, so I’ll look into other ways ? OR maybe I’m missing something in how I save them x)

Sorry for the white thing over the cannon, it’s the collision box and fox now I have no way to take it away in the FX tool o:

I’ve had to drop this canon for some time now and focus on other VFX for the project I’m working on, but I wanted to do a small update with an explosion I’ve been working on. The leftover ground area is still a WIP (not sure the kind of look/render I want on it), as well as the cloud of smoke that rises up (dunno if i want to leave it and make it better, or straight up take it out of the FX), but I’m pretty happy with the explosion itself!
It was heavily inspired by @Sirhaian’s work on Ziggs and other various explosions in his work! I learned a lot doing this one, and I hope to apply timing and marking frames for my future VFXs \o/

Sorry for the crappy gif, I havent found a better fast way to save them yet (and a video is too long when I just want to share quick updates with teammates ;;;;; ) - still hope you’ll enjoy it!

And of course feedbacks are always welcome o/

Hi there ! It’s definitely been a long while haha, I hope someday soon I’ll take the time and energy to make a little sum-up of the work I got to do on the last project I worked on. But in the meantime, here are some little fire experiments!
The two on the right are the first one I got around to doing, trying for a more stylized look and then working my way into something a bit more realistic !

(I’m trying to see if a youtube video can be read from here, I’m not too familiar with how to share VFX in a clean way yet sorry about that…) 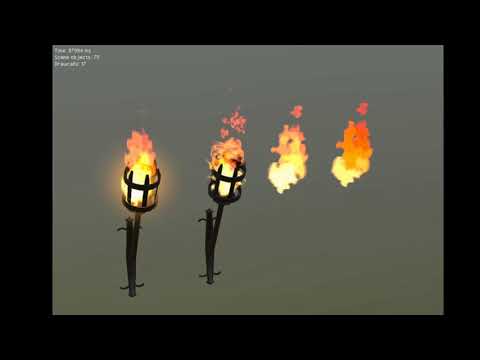 Also leaving a gif (with lesser quality) right there, should the video not work o/