I was just working in UE4 and was about to polish an effect when I noticed a weird issue with the curves in SubImage Index. I’m getting weird default values in the tangents, and the graph looks weird. Changing the values doesn’t fix the graph, and this isn’t just a visual issue. I can see my sub uvs snapping back to the first frame as it plays through. Switching the curves to Auto and trying to adjust them gives a weird vertical element in the graph too. Has anyone run into this recently or in older versions of UE4? 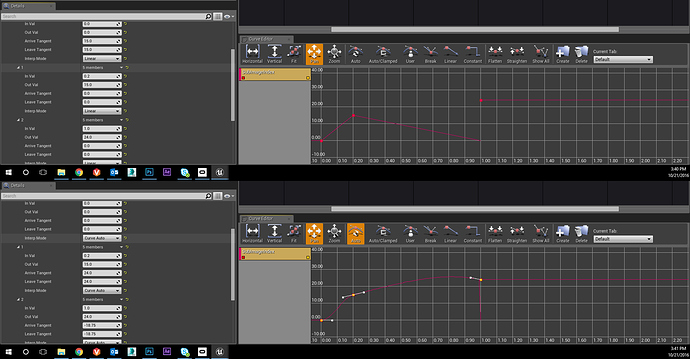 Never had that issue before, and I use that on a regular basis.
Also never saw an answerhub post about it, and ive been around on the answerhub since the beginning of time.
(or at least, must have missed it, and I have been getting an email for every new post)

I’d delete the module and place a new one, or at least clean the graph and start from scratch.
Should show us a video, and additionally post on said answerhub

It must have been corrupt when I exported the emitter. I tried clearing the points and adding new ones with the same result, but after deleting the subUV module and adding a new one with new points, that fixed the problem.

It doesnt help, but I have had that problem once before - a really weird curve with some points that couldn’t be controlled etc. Basically 100% what you have, but I didnt export a module.

As you’ve found, I found the best way to resolve it was to completely delete it and start again!