Does anyone know how to get SubImage Index to work in UE4’s Cascade particle system?

I copied the setup from the sample material/emitter (right side) and it won’t play the frames. I must be missing something really obvious.

I’m coming from Unity 5 so some of the terminology is a little different. I saw there was 1 post about a somewhat similar issue, but deleting and reconnecting doesn’t appear to work. 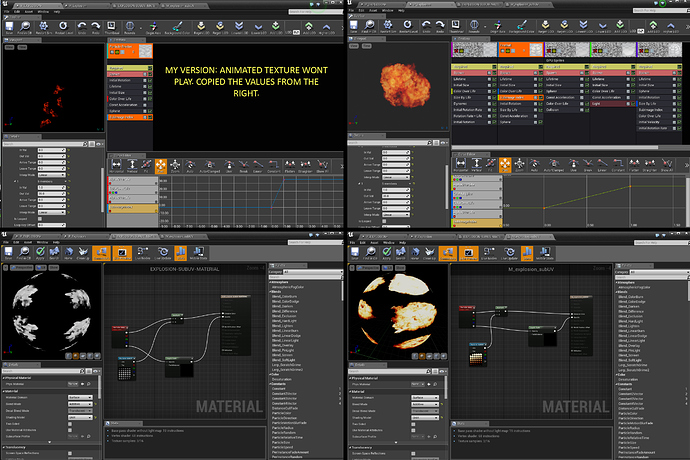 SOLVED. I forgot to set the “Interpolation mode” to Linear Blend under Sub UV in the Required Tab.

Okay, here’s another issue. I can’t seem to figure out why the dust fades in, but then it just abruptly disappears.

The lifetime is set to 5 and it fades at 3. I messed with the emitter duration to see if that did anything, still popping. Any ideas how to fix this? 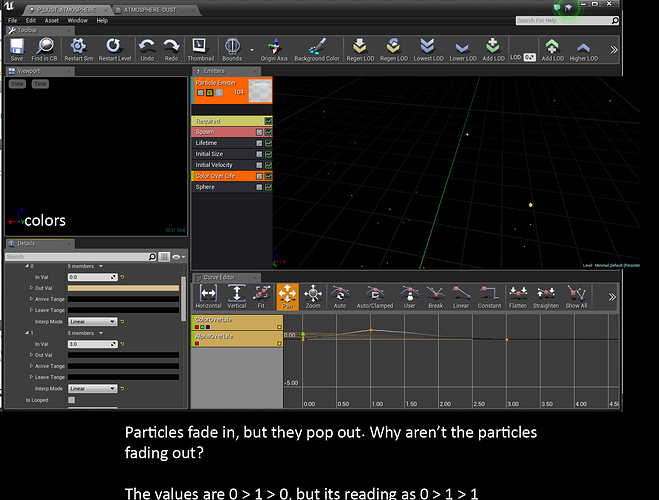 SOLVED. UE4 uses a system of 0-1 for its values (including time?). Now things fade properly.

There’s some weird stuff like that. When you are working on an effect, always assume that your values are in a 0-1 space, and if you don’t notice a change, try 0-360 space.

There’s some weird stuff like that. When you are working on an effect, always assume that your values are in a 0-1 space, and if you don’t notice a change, try 0-360 space.

Almost, although the 360 mention is only for rotations (and I think maybe they’ve finally unified that now?).

There are two types of “time” that the modules can exist on, and unfortunately this isn’t information that’s represented to you in any way through the UI:

The question you have to ask on each module is this: Am I telling the particle to do something over it’s own lifespan, or since the emitter turned on? For example Scale / Life is obviously the particle’s lifespan. Initial Size though… if you were to animate it… would be defining the size of the particle at it’s birth, at a certain time in the emitter’s timeline. In your example above, you are attempting to define the opacity of the particle of it’s lifespan, so between 0 and 1 on the axis axis is saying between birth and death (You got this).

To complicate this subject immensely there was a very bad bug up until recent builds that actually clamped the “emitter time” inputs after 1 second as well… if you’re in a recent build, that has been fixed, so you can now animate a 10 second loop of particles spawning at animated initial sizes/colors/rotations/positions/whatever.

I’ve noticed that “Spawn Time Only” no longer works like it used to, and often times when I turn it on, it messes with the effect

Okay I see what you’re saying about the particle/emitter time. It’s interesting how its set up this way it was a little confusing at first. Good thing that bug isn’t around haha