UE4: Skeletal Mesh starts playing as soon as I drag it onto the level

How can I have my skeletal mesh play its loop animation as soon as I drag it onto the level. Currently I have to place it in the level then I have to hit the play button.
Im pretty sure there is a way to have it play over and over in the level with out having to play the level, isn’t there?

There’s simulate as one of the play options but I wouldn’t recommend trying to work in that, it resets changes to actors when you stop it.

I must be imagining it.
I thought it would be great way to design my next project. Because the FX and animation would be so intertwined, I figured if I could just have the mesh do its thing (animate) over and over then I could keep tweeking the FX. Sounds like I will have to hit play every time I want to see the whole effect.

Just hit simulate, pretty sure you can work in cascade whilst it’s simulating. But definitely give it a dry run first, as above, simulate will ignore in-level changes once exited.

In Unity you can work in simulate mode and once you’re done making changes, RIGHT BEFORE you hit stop you can copy your particular object with all the parameters and then once you hit stop you can paste the module and replace the older one with the newer you worked on while you were in simulate. Don’t have access to unreal right now, but maybe there’s an equivalent of this in unreal?

yep i must agree is much faster workflow

in unity. I would be happy to know if its possible in a way with Unreal.

The copy paste thing might work, I’ve seen bluetilities use something similar, you only need to forget to copy once though…

TBH I’d probably just set up a quick matinee, you can easily have the skeletal mesh animation and the fx playing together then and you can definitely edit in cascade while a matinee is open.

So I think I possibly found something that could help with this, tried it with a particle system with multiple emitter modules and it worked for me. (Haven’t tried this with animation so can’t help you with that OP but I have a feeling it should work for that too) 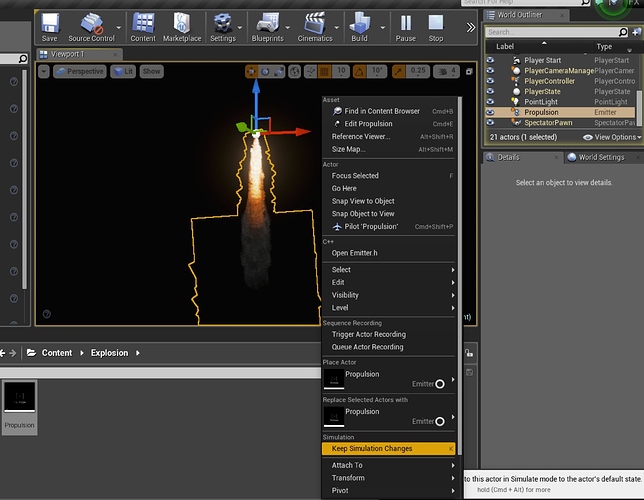 So once you’re in simulate, and you’re testing your system out and making changes once you’re satisfied with what it looks like: