EDIT: Putting a GIF of the latest version of the effect.

Hey guys!
Been quite a while since I last posted here.
Here’s a lightning effect I’ve done some time ago, there are still some things I’ll change, but I would love to hear what guys think.

The red sparks look good, as do the small blue lightning bolts.
the big bolt of lightning needs some motion. Could use either use a flip book and/or uv distortion. don’t fade it out, lightning flashes.
The effect needs some kind of anticipation preceding the lightning bolt appearing. Something like a sphere charging up which then releases the bolt.
The impact mark may look better if you play around with the scale to make it bounce out of existence.

the spiky cloud is rotating a bit too fast imo. however, the effect as a whole should be faster. playing the video at 2x the speed it looks way better.

could add some screen shake to the effect.

Thank you for the feedback friend!

the big bolt of lightning needs some motion. Could use either use a flip book and/or uv distortion. don’t fade it out, lightning flashes.

Yeah, I was thinking about using a flipbook, it does need motion, but I am concerned about how big a flipbook can be that the image in the effect looks good without compromising performance.

The effect needs some kind of anticipation preceding the lightning bolt appearing. Something like a sphere charging up which then releases the bolt.

I WAS THINKING EXACTLY THAT! HAHA, even made some sketches. Will work on it and update it.

play around with the scale to make it bounce out of existence.

I’m sorry, but I didn’t quite understand this part.

I’ll be making changes on the effect and will try posting it again today.

Hi! Nice one, not much left to say, only two things and arent “feedback” perse

First, what cell means on using the scale. I think he means that it could be nice to scale the effect when dissapearing. Example of scaling: Squach and stretch. So makes a bit more of motion.

Second, if youre trying to upload a little length gif of an effect, i highly recommend you to check ShareX, it can make gif of whatever part of the screen, at whatever quality and upload automatically to imgur or sites like that, and then, copy the direct link to your clipboard perfectly prepared to paste into this forum xD. Just a high ass time saver

Ah yes, PD: looking forward to see the next version

Oooh, now I got it.
That’s a sweet sweet tip, thank you for sharing, will try it when I update the post.
(And sorry for the delay on updating the effect and to reply, there were some matters that I had to resolve and things took more time than expected

Hey there!
Here’s an update on the Lightning Strike effect!
Added a electricity sphere thingy to add some antecipation to the effect.
Still need to make the motion on the lightning and adjustements as it fades, as well as some timing adjustements overall.

Please, tell me what you guys think! 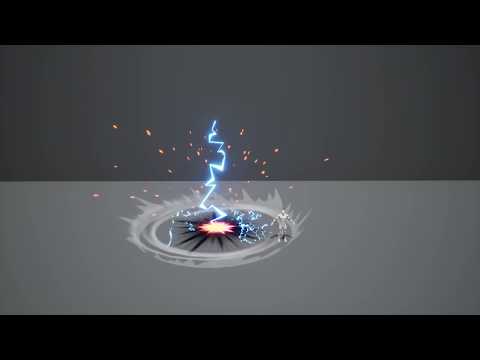 Hello again!
Here’s the latest update on the Lightning Strike VFX
I’ve added some movement on the bolt with a Flipbook, changed the texture and rotation rate of the impact dust and added a bit of smoke.
Please tell me what you think!
And thanks a lot for that tip with ShareX @vaxkun. I still need to properly get the hang of it but it surely helped.
https://www.youtube.com/watch?v=9r7r0ZpXCBU

love it when ball convert into lightining…