I wanted to ask something. When you create your FX in Unreal, do you use it only in Cascade, or do you mess with blueprints to have more versitility?
Is it mandatory for every effect to have some blueprint action, and how would you use it?

I’m just starting out in RTVFX so, there are many questions

Thank you all in advance!

Messing with blueprints or code is necessary if you want to have emitters spawn whenever you press a button or trigger an event. Blueprints would also allow for things like timelines that can tweak parameters in materials. FX is not strictly particles.

I guess for FX that are static and will play the same every time, for example a melee sword slash that is always the same and in the same range, It isn’t necessary to do some custom blueprint parameters for location and such?

For FX like range projectiles which depend on gameplay, where will it fire and how, you need to do some programming for location, orientation, distance etc.?

If i understand correctly, its the link between BP and Cascade that is important for the particles to have gameplay dependant info on where, when and how to play?

I don’t know how others do this, and it depends on the effect, but we usually call sword swipe stuff in the animation track. Hit impact FX are called via Blueprint. Ambient stuff for environments can usually just be placed in the world, unfortunately our tech artist handles when and how those get culled out and load priority, so I couldn’t give you any direction on that stuff.

Projectiles and hit scan fx are done in blueprint, but you need stuff set up in Cascade for the Blueprint to use.

Do you ever use blueprints to determine how an effect moves? I i tried busting open Luos, kingdom hearts effect to see how it worked, and it looks like its animation is done thru blue prints. How often do you come across somethign like that? This is the on i’m talking about 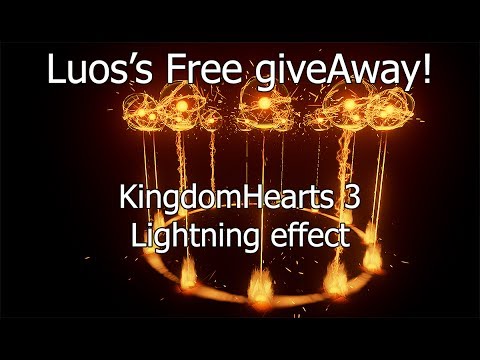 This looks like a few different particle systems tied together. The short answer to your question: Yes, I would use BP to spawn and move this. You can (and I have) do this entirely in Cascade, but that was when I was still learning how to make effects. I didn’t think it was time well spent to try and learn scripting/kismet/blueprint at the time, when I was still trying to learn particles and materials and get that muscle memory down (so to speak).

Long answer with some explanations:
This is super impractical to do all in one emitter, because if design needs the radius changed, or the time the effect needs to play on screen, etc, you are probably adjusting, at a glance 96 emitters (guessing 8 emitters per pillar, 12 pillars if my eyes aren’t fooling me). Even if you are sharing modules between emitters (Hold Shift and drag one module to another emitter and you will see a little + next to it) you would still need to adjust init location, motion, and lifetimes.

Blueprint way: you call just one particle effect, in this case our lightning pillar and it’s little ground trail, 12 different times and attach them to something that is controlled dynamically through blueprint. That dynamic control could be adjusted for how far the emitters spawn from the center point, how fast they rotate around it, and how long they live, all without you having to touch your particle system.

I see. Yeah it seemed very useful to be able to make the particle once and then animate it in Blueprints. Right now i’m trying to learn some blueprints, but I’m afraid it may not be time well spent because i’m still not “proficient” with cascade, or the material editor.
I imagine with time, i’ll eventually get to controlling things in blueprints. Was that how you eventually came to start using blueprints? was it something required of you at work?

On a similar note, I’ve been seeing this material function pack on the UE4 store, and I want to buy it to make effects. I used to do characters, and I wouldn’t hesitate to buy a tool or something I needed, (like a Boolean kit) to help me make my models better. Is it cool to do that with VFX? or are you expected to make all your own tools? I’d rather not if i dont have to, and just make materials/ textures, and animate them to make some cool effects.

EDIT: I’ve just asked a vfx buddy of mine, and he says it is in fact, NOT COOL to use the material functions found inside of kits on the UE4 Marketplace, and i should make my own. Good to know

My two cents from recently getting into vfx and only doing this professionally for about 3 years is to get proficient with cascade and materials. When Epic releases Niagra that will be one more thing we’ll all have to learn, so better to understand how effects come together with materials and particles before getting into blueprints. Believe me, I understand as good as anyone how frustrating it feels when someone says “you’ll learn that on the job” but you will. I’m one of those people who wants to learn everything that has to do with anything I’m working on, but trust me and try to curb that urge if you’re one of those people as well. Blueprints are as expansive as both Cascade and the material editor, if not more so, and you can end up spreading your time too thin. Focus on effects and take them as far as you can before digging into design.

Most often your design people will have already set everything up before you even finish the effect for them, or before you even hear about needing to make something for it. That was my case, and I started picking up little things as the designers explained how the blueprint worked and what the effect needed to do and convey. After a while of getting comfortable making stuff in a production pipeline, I started to feel bad asking our designers to set up stuff for me and wanted to learn how to do things myself. This sort of accelerated when we got to a point where they were really busy and I didn’t want to bother them, so I started setting up little things and just double checking with them that I was going down the right path instead of having them do all of it for me. My knowledge and proficiency with blueprint is just a drop in the ocean compared to them, but I can do more now than when I started.

So as a employed VFX artist, for example a Junior, it is not directly your job to make the blueprint setup yourself, but in relation with programmers and game design people?

I understand that that isnt always the case, and if you can do it, you should, but just a general question.

Even our mid and senior guys don’t set up too much in terms of Blueprint, but that is just our studio experience. Because our designers are constantly tweaking values on things like fire rate, damage amounts, size of aoe range, etc they usually have stuff checked out and need to know exactly how everything works. I’ll add stuff for when to play and kill loops, duration of stuff, if this play X effect, else play Y, color parameter and emissive values, etc. We aren’t setting up boss battle sequences and weapons though. Most of the time our environment artists make our physics destructible objects too, we just add in the appropriate effects to play when they break

We are pretty hands off, and when we do add stuff we do it in conjunction with a designer so everyone is on the same page and we are following their workflow and logic.

I understand. Thanks for sharing the experience

Other studio experiences may differ, so take my experience with a grain of salt in terms of work responsibilities. I do still recommend really getting comfortable with particles and materials first before digging into blueprints and scripting though.

Yeah, so i will watch the video that pmiller posted, and there is another recent thread where the artist used blueprints to manipulate particle parameters. At the end of the day its about the effect, blueprints are there to connect parameters of that effect in the gameplay if there is a need for it.

And probably everybody does it differently. So as a, hopefully, Junior VFX artist I shouldn’t get my head stuck with the programming and game design aspect of VFX just yet?

I personally do a lot in blueprints ever since I learned how to do it, it’s quite empowering. Some effects are fine just being spawned with an animation notify or just placed in the environment. Others are more complex systems with multiple moving parts and blueprints are great for those.

But if you’re just starting out I’d focus on materials and cascade, and then move on to blueprints once you need more complex, gameplay dependent behaviours.

Yeah for sure, i understand there is a lot of power and simplification once you get used to and have a need for blueprinting. I will have that in mind as a future milestone

thanks @Travis for all that information.

there’s a lot to digest here, but what i’m coming away from this with is, that I should get “good” with cascade and the material editor first. That makes sense, and is honestly a god send to me. I know for a fact I have a bad habit of spreading myself too thin when it comes to learning things, because i want to learn it all at once. So its good to know that others think like I do lol. I wont lie, I cant wait to get into blueprints so i can start making even more advanced stuff, but that will have to wait

Think of vfx like climbing a mountain. Learning Cascade and materials is like walking up to the top in a straight line, you will get much closer to the top in a short distance, but the closer you get to the top the steeper and more difficult it gets (that threshold of how much you can do without Blueprint functionality). 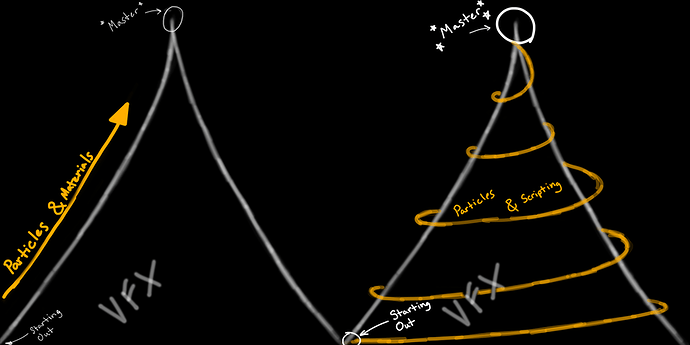 Trying to learn particles and materials along with learning Blueprint is like climbing the mountain by walking around the base. You are traveling a much farther total distance and making very little vertical progress to the top of “mastery”. Consistency in learning increases the speed in which you learn something at. So if you are breaking up your time trying to learn particles/cascade, materials and material tricks, AND Blueprints or scripting (which is in itself about as expansive as vfx), not only are you devoting fewer hours to each, but those hours are spent less efficiently.

Thanks for that @Travis. I am definetly that guy that will spend his time trying to learn quite a few things, and ultimately spending his time inefficiently. Atleast until i’m given something like this. SO thanks for clearing itup. i think in the mean time i’ll just get good with cascade and the ME first. Like you suggested