Substance vs Quixel for VFX?

Hey! I’m going to buy myself some software. I’m looking for something to replace crazybump, but it would also be nice with some other features like good tilebreaking, noisegeneration and so on.

The quixel suite with NDO looks nice and comfortable because I already have a photoshop license. However, the stuff coming out of Substance and their B2M looks very promising.

I will vouch for Substance Designer though I have never really used the Quixel Suite before. Designer is great for generating random noise/cloud textures etc. I have also gotten some really fun shapes by warping a noise with a radial gradient or disc too.

Quixel is great if you can’t really be bothered learning a new full on program like substance. I just bought myself a license for home. It’s probably the best height to crisp normal program out there. Its very quick to learn and use. It costs around 26$ US for a license at the moment. It has a lot more control that crazy bump and works incredibly well for hard surface stuff. Sharp edges work fantastic with it as you can see 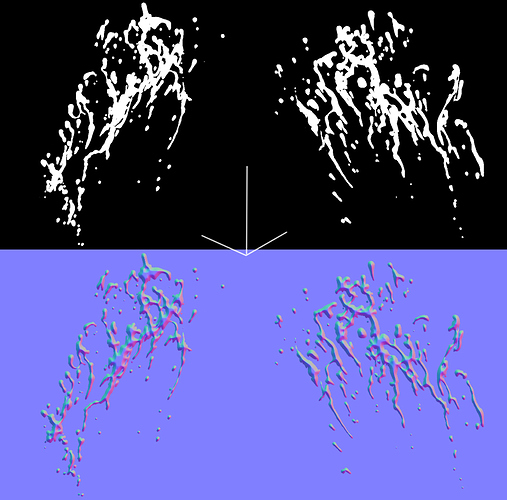 Ill probably pick up substance eventually. However, I’m not really sure it’s needed for most things. Quixels a quick easy tool that will cover 80% of the things you need to do normal maps wise. In my opinion anyway

Hope this helps a little

PS. id be very keen to see examples of what kind of stuff substance can produce! There isnt much fx related stuff out there.

In my experience with the two, I found substance to be much nicer.

I am pretty fond of substance designer for its node based interface whereas with Quixel I didn’t see that at all rather I saw heaps of knobs and dials that were really intimidating to me.

Quixel can get good results no doubt and if all you want is creating normal maps out of diffuse then it might be better.

I wasn’t the biggest fan of B2M, it felt like a secondary product tacked onto the substance suite but I never explored it in depth.

Take all this with a grain of salt as I don’t normally use either, but if I did have to it would be the Substance suite for its plethora of tools.

Substance Designer is my main texture creation tool nowadays, it’s very convenient to create all sorts of masks, noises, shapes and whatnot. It’s quite powerful and fairly easy to learn.
I own the Quixel suite too but I haven’t touched it in quite a while, feels too clunky to me. Since Substance is node-based, non-destructive, iterating on things is super fast. It seems more comparable to Filter Forge (though I haven’t used that one yet).
I suggest getting the trial version and trying it out, and you can hit me up with any questions if you need!

For tileable textures nothing beats procedurally generating them in designer. Even after learning just a few nodes you’ll be surprised with what you can generate. However I do find Quixel a lot quicker to work with if all I need to do is scribble some stuff and convert it into a normal map, which is usually all I need.

I’ve been using Designer and I’ve liked it a ton, super versatile on all different types of textures. I’ve used both and I’m torn. Likely to just use designer from now on for anything tiling. I’ve used filter forge too, but I find Substance Designer more intuitive
.