While I was working on my campfire area of the game project meanwhile browsing realtimevfx, found out that I can enter this official sketch! yay!

So here is the my version of campfire:

The only problem I am facing is, I created this fire material in ue4 since project demanded stylized+realistic look and now i don’t know any better way to place the fire without attaching it to two planes and cross sectioning them. As you can see it’s visible enough to get noticed. Also, I tried creating particle system while attaching the material to emitter but that when placed in scene moves with the camera and looks weird

Any help with this would be greatly appreciated. Thank-you

Just take the entire scene, and push it where the fire is.

If it’s a fire material, can you not just simply make a new mesh and apply it to the new mesh. Why is the fire hovering in the first place? I’m not sure I really understand the issue.

Also - WOW. Are those fireflys actually on fire? They are moving fast.

So, if I was supposed to make a mesh what kinda mesh do you think it should be? Like a cone perhaps? Also, it’s a GIF and hence it feels like the fire is hovering(don’t know exactly what that means! sorry

)
Yes! those are fireflies. Maybe they are too fast. I didn’t noticed that

Thanks a lot for feedback! I need to change some things NOW

It’s a GIF and hence it feels like the fire is hovering(don’t know exactly what that means! sorry

No worries. I mean… 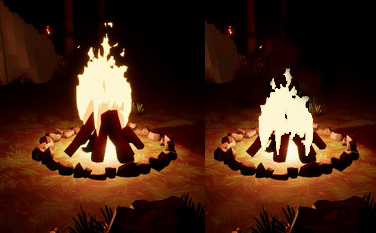 Don’t get me wrong, it’s a nice stylized fire you’ve made there. I simply had to post because, well - those darn fireflys. The speed they are at seems wrong to me, and it distracts from the main focus. That one thing hurts the overall piece. Everything else seems fine to me. That’s all.

You could always include a depth fade node in the material for the fires and have them blend in a softer way with the logs, eliminating some of the cross section feel.
Another option would be to add the fire material to a sprite in Cascade and restrict the sprite rotation so that it only rotates along the Z (if that’s the UP axis) and give it some camera offset, along with a depth fade node in the material, of course.