Alright, I really need help on this!

So I was working on this shockwave made with the help of pyroFx in Houdini. And I need to make it glowing similar to the pic below.

Any idea how to do this?

Also, If anyone can help me with transferring this pyro from houdini to UE4 since I tried making sprite sheet out of it and ROP output gives error saying “Cook error in input mosaic”. Here are the images: 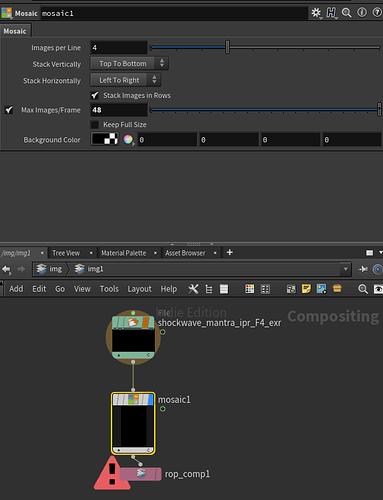 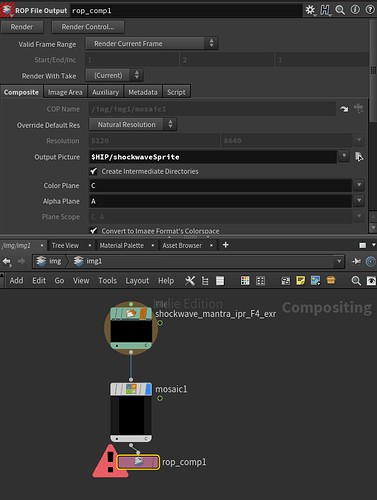 Idk about Houdini but for the glow you could do that in After Effects and tweak the color.

Glad you replied! Hmm… that might be one way. But I really need to learn how to make things glow in Houdini. Thanks!

Could you post how your smoke shader looks like? I imagine you should be able to map density to temperature, and then adjust your temperature ramp to be as emissive as you’d like it.

As for the mosaic node, it has been known to be a bit temperamental - I would uncheck the Max Images/Frame and just make sure that you render out the correct number of frames from the get-go. Mosaic also only outputs a single image on the first frame, so make sure that you’re not scrubbing around the timeline!

I think by far i am working with the default pyro shader of houdini and haven’t changed it yet. I’ll try working with your suggestion! Thanks a lot.

Also with mosaic node, Is there any ideal number of frames to render out or it can be any number?

The mosaic node will work with any number of frames, but remember that Houdini has a setting for max allowed image resolution, and if you input too many frames it might run into that limit and fail.

For game purposes though it’s generally a good idea to keep the number of frames to a power of two, so 16, 32, 64, etc. When I author my flipbooks I generally aim for an animation that goes from start to finish in around 128 frames, which lets me easily divide that into shorter segments and see how well those hold up in-game!

Alright! I’ll try this, maybe mosaic is not that evil.

My only limit with Houdini Indie is the frame size cannot exceed 1920 x 1080.

I recommend that you make the sim grey. Then you can tint it to be whatever you want in-engine. What i did to achieve a similar look was made a black and white sim that was almost transparent. Then I rendered it out and brought it into after effects. From there I duplicated the layer until it was as opaque as I needed it to be, then I applied the video copilot vibrance plug in which did wonders for getting me that glow that you are looking for. for a real-time setting, I would make it into a sprite sheet, bring it in engine, then do work in the shader and particle system to get the bloom.

If you create that sim with a high value color, the bloom from something like Unreal 4 will naturally make it glow. I am sure there are better ways to ahcieve this, but creating real time versions of the video copilot shockwaves is something I am realy trying to achieve as well.

https://www.youtube.com/watch?v=VEPrZ7ltPaI&t=921s in fact even in the picture you are referencing they started with the sim black and white and edited it in post.

You need to make sure you’re using a dop import field that is set to pyro, cache out the sim. Create a new geo in the object context and assign a pyro shader. Depending on your simulation / how you’re creating the behaviour you can remap channels to the shader. For instance you could provide density in the place where heat or temperature traditionally go on the shader.

As someone mentioned before, making it grey and pushing the colors on engine side is better. Assume someone will ask for 10% less of one colour.

Yes I agree with the thought of making it grey and then adding color in engine. I think that might help me get my render time reduced since I am struggling a lot with it. Also, I did try out shading the pyro and got hang of it quite easily(Didn’t expect that

).
Can anyone guess why the pyro takes so much time to render out and doesn’t properly give spritesheet while doing mosaic output ?

Thankyou for all the solutions. Really appreciate it.

Can you clarify what you mean by

“Can anyone guess why the pyro takes so much time to render out and doesn’t properly give spritesheet while doing mosaic output ?”

If that’s the case, throw a ‘scale’ node down after and set the actual size of your final sprite sheet.

I would export different passes of your pyro using the mantra image planes. Then in comp split the .exr file, do any tweaks and then pass it to a mosaic node.

*side note - If you render out a full sequence, before you throw down the mosaic node you can do a timeswarp . On frame one set the value to what you want the first image to be in the mosaic. Set another / last key on the last frame number you want in your texture sheet. Set the value for the second key to the frame in your image sequence.

In this instance if you’re asked to see more of the ending or the beginning, you can change the curves in the animation graph or the values on the frames; rather than trying to re-render everything.