Here’s my entry for the rainbow gun prompt. My goal with this one is
Learn something new, and To learn to use blue printt, as well as splines to make this effect. 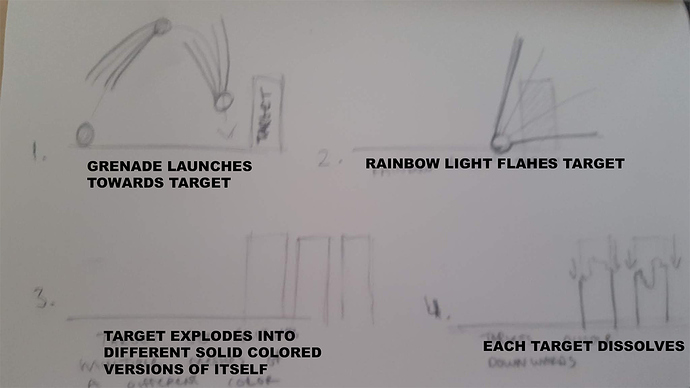 This is the idea of what i’m plannig out. Before I get to the fun part of making materials and what not. I’d like to get the technical bits sorted out.

I’ve gotten splines in bp’s to work (sort of).

What I want is to be able to spawn the emitter at the end of the spline at the last location of the emitter.
My blueprint that I made looked like this

(I plugged in the “completed channel” from timeline into the spawn emitter at location).
THis didnt work however. SO i’m going back tot he drawing board.
I do have a view guesses though as to why it didnt work.

-I didnt build my spline inside of the blue print. I built it in the map.

Those will atleast be the first things i try. Once I get this whole thing worked out. I’ll actually be able to start making the effect.

So I’m still trying to figure out why my emitter isnt spawning. This is what i"ve gotten so far.

When that didnt work, I figured, ok, it must be my emitter, so i downloaded paragon pack, to see if one of those effects worked on it.

Using one of their effects didnt yield any results, so that tells me the particle emitter isnt the problem. So I assumed the next thing to test was the blue print. SO I made a nother blueprint class, just to see if I could get the particle emitter to activate at the location ( 0,0,0 in this case).

I FIRST tried it with my effect, simply using “Spawn Emitter at Location” and nothing else. I thought this would just spawn my emitter as soon as the game started. 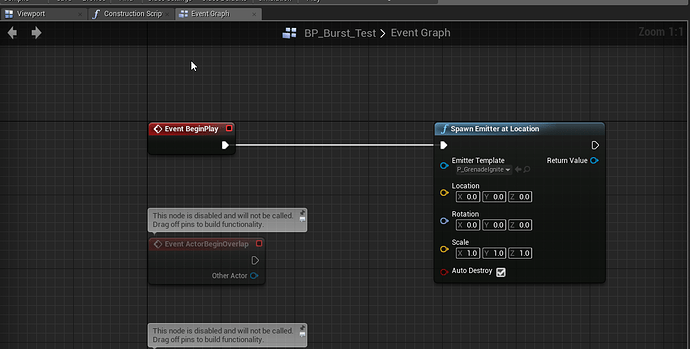 This did not work.

I once again, tried to use a paragon effect, to see if those would work either.

Unfortunately this also did not work.
At this point I’m really not sure how the “Spawn Emitter at Location” node isnt working, and i’m chalking it up to me not knowing enough about blue prints, even though this seems like it should be very very basic haha.

So in the meantime , until I get this blue print nonsense figured out. I’m going to break down my effect, and do the parts I know I can do (the explosions and what not).

If anyone could point out what I’m doing wrong I"d super duper appreciate it. I"ll record a video so you can see exactly what my process is.

So after I finished tinkering with blue prints, this is as far as I got tonight. I tried using Jqarllson method in his magic missiles project, to see if i could get an impact, or small explosion effect that I could use for lift off and impact, but It only kind ended up the way I wanted to. I think i’ll have to collect more reference. 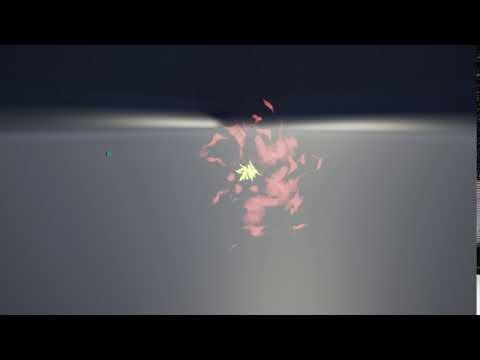 And here’s a gif for good measure.

Maybe try the Spawn Emitter Attached node and plug in the spline component to the Attached to Component input. That seems to work on my side.

Hope this works for you too…

Hey dude!< thanks for the sugggestion. I’m going to try that as soon as i get home.

Well the solutiong got me halfway there. I was able to use your blue print, to have a particle spawn at the end of spline. Unfortunately now there are two problems.

-the particle isnt spawning when I want it to,

-the particle isnt moving across the spline.

I’m going to take a shot at this , and probably record a video tonight. Thanks for the help though @Jared!

So I reached some success tonight, but ran into a few more problems.
on one hand, I can now spawn the emitter at the end of the spline. Thanks to Minjnr.

Unfortunately, the emitter just keeps spawning. Its supposed to be a burst, so i’m not sure why’ its doing that now. 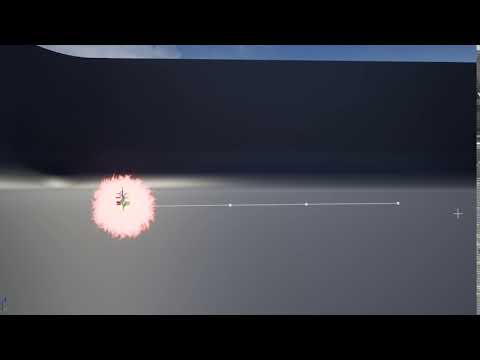 until I figure that out. I think i’ll focus on making the effects themselves before putting them together.

I’m fairly certain i can do this,I’m going to use this as the launch point for my rainbow grenade. 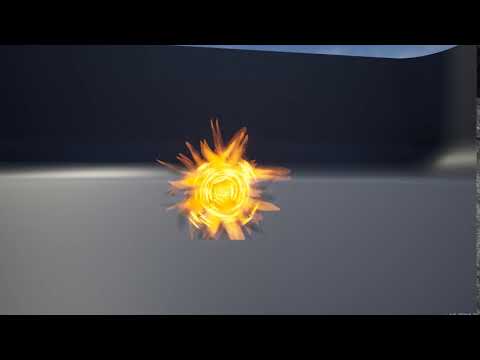 So not exactly what I wanted, but sort of a h appy accident. I’d like to be able to re use this for something else, or keep working on it to get the above results. C&C more than welcome.

Luckily I think this was a success. Turns out, if you up the spawn rate to like 300-400 the ribbon emitter doesnt look too bad. I’m not sure if that’s the right way to to go, but Its the result I want so.

Now my problem is, the particle itself is snapping at the end of the bp animation. 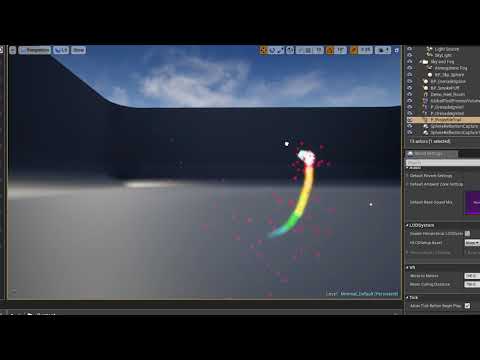 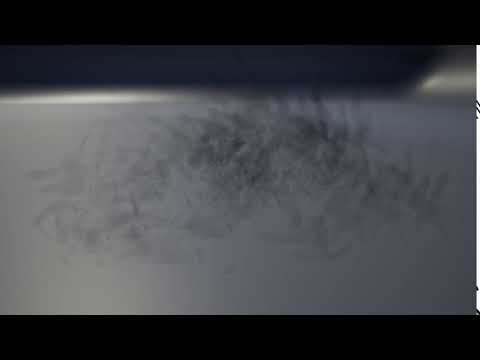 If i understand correctly. You are talking about the particle still lingering at the end of the Spline?

Couple guesses and i could be wrong.

This could potentially be because your Emitter Duration may not be timed the same as your Particle Lifetime OR
The time it takes for the timeline to reach finished in the blueprint is longer than when the particle component gets destroyed.

Oh those are both good suggestions @Jared, i’ll give both of those a try when I get home. Thank you a bunch!

I was at work most of the day, so I wasnt able to address the issues from above. I’ll have to do them tommorow. Right now im confused on this… I"m trying to spawn an emitter when my rainbow particle hits a collider like i have in my scene.

And I assumed once I did this, my blue print would be as simple as this.

however that doesnt seem to be the case.
What am I missing? DO i need to make the collider a seperate bP? then cast to that BP? or is it even simpler than I am making it out to be.

oh yes, i also went through this process recently; recommend adjustments to softness,strength and size graphs with tablet pressure so you can paint soft edges [image]

Hey! Are you getting any events spawning from the collision at all?
Otherwise I’ll make a print screen of my mess of a blueprint and I’ll try to break it down somewhat. I remember doing manual checks every frame if my collider was overlapping that specific collision sphere and once it was I just killed it and spawned the particle emitter.

Is the collider always at the end of the spline? If so, you can remove it and check the current distance along spline.

well i’ve just put the collider at the end of this particular spline in the blue print itself, but its not always at the end of the spline, no. I’m not sure how i would do that. I imagine, the same way I move the emitter across the spline?

Yep. Try triggering an event when the emitter reaches 80% of the splines total distance. If this is the functionality you want, abstract it. Create a blueprint variable so the user can set the percentage. How about an array of events?

@cannabis.cod3r I tried doing what you explained but I wasnt sure I actually understood it. I’m not sure how to
-Trigger an event with a sequence at a certain point along the spline,
-I also dont know what a blue print variable is.
-I also dont know what an array is. i remember learning about it on the initial run through of the ue4 blueprint videos, but I htink i’m going to have to refresh mysefl>

Based on my knowledge now, this is what I tried. 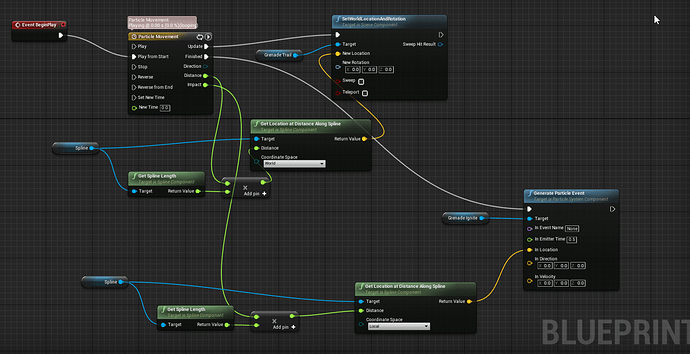 It didnt yield any results, so I’m not really sure what i’m doing wrong.
Here was the result 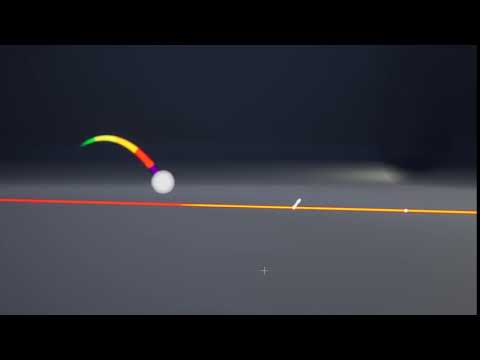 The one on the right is the BP result, and the one on the left, is effectively what I want.
I “sketched” it out in cascade, just so i could see it. 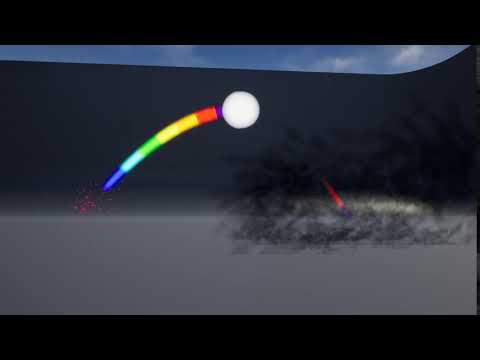 I’m going to keep making the effect, and trying to figure out BPs while i’m at it.