Even though I’m sure it’s more of a noob question, than a technical problem… 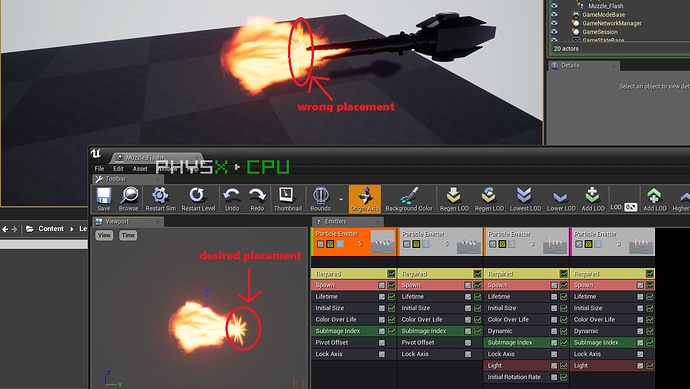 What makes effect look completely wrong in the level, when everything looks correct in cascade? I had to push numbers here and there to at least resemble what it was suppose to be.

Although, one thing I cannot (don’t know how to) correct - the star-like flash that suppose to be on one edge of fire-like flash and needs to come out of the muzzle first. And it is almost in the middle of fire flash in the level.

I can think of only one solution - make two separate particle systems (star-like and fire-like flash) and attach them one after another. I don’t even know, if it’s going to work. I am really ‘green’ at this.

Please, share your knowledge/techniques, or point me to some sort of tutorial, that I must’ve missed, while possibly wrongly wording the issue.

P.S. in this case, please ignore effect itself. I will tweak it, once this issue is fixed

This looks like a particle orientation issue to me - your particles are perhaps set to camera aligned or camera velocity aligned meaning in the game viewport the particle is twisted to face the camera,

worth checking those options first

Initial location node or the required node has emitter offsets in them you can use.

The gizmo you have displayed int he viewport, think of that as the location where the effect will spawn from when you put in the game…generally speaking.

Looks like a orientation issue, but maybe a socket issue?

Ok. so basically, I didn’t realize that transforming emitter already inside the level will only transform Element 0 of all the materials. Bummer.

Just wanted come back to this topic to clarify, as same thing happened while playing around with another emitter. 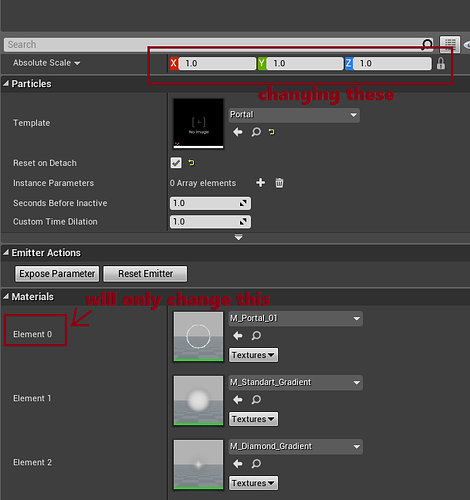