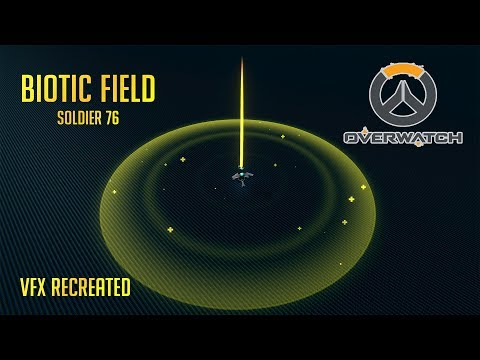 From what I’ve seen of overwatch, this seems pretty accurate. Would be nice to see the field open and close aswell

Thats a solid base to build on. As @Niels pointed out, showing it open and close, and adding some burst FX at these moments, would be add some punch to it. I also think there should be some sort of aura or glow around the device in the center.

Well, i wanted to animate the mesh but it wasn’t mine, it wasn’t really ready to animate (it was made for a simple 3D Printing). Thus why i simple made a rotation animation.

As for the burst effect, i totally agree. Though, like stated in the tittle, the purpose was to stay faithful to the effect. Reference here: https://www.youtube.com/watch?v=jYbuGgoMHHE

So, my questions are:

Right, you don’t have to do your own version, but it could be very interesting to see what you come up with

If I have a closer look at your referencem I start noticing some slight differences, mostly during start and stop of the effect. It feels a lot less defined. Overwatch shows clear starts and and stop. during the start the outer ring becomes visible very fast while the shrinking rings only appear somewhat later. During the stop sequence the elements dissapear and nothing gets spawned anymore.

With you this is a lot more subtil, start is almost not visible because of the start of the effect being when the video starts. The end on the other hand is a lot smoother, after the effect ends the ambient particles still keep spawing for a few seconds.

Now that you mention it, it starts as soon as the video begins. Didn’t noticed it until now.

Mmmm… Well, i’m just wondering, for my future projects, if i should have done something more personnal rather than to reproduce the effect itself, just like i did with Zarya’s ult in a previous project.

And thanks for the feedback!