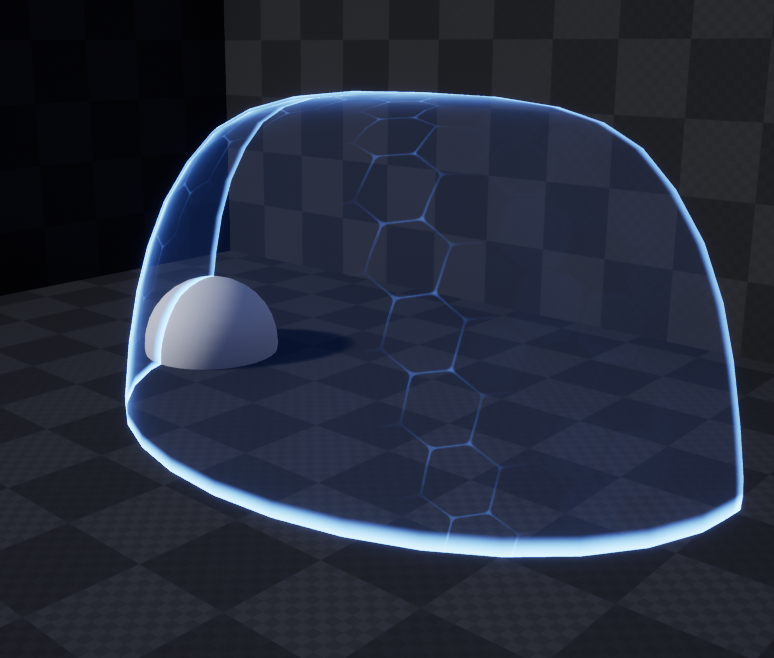 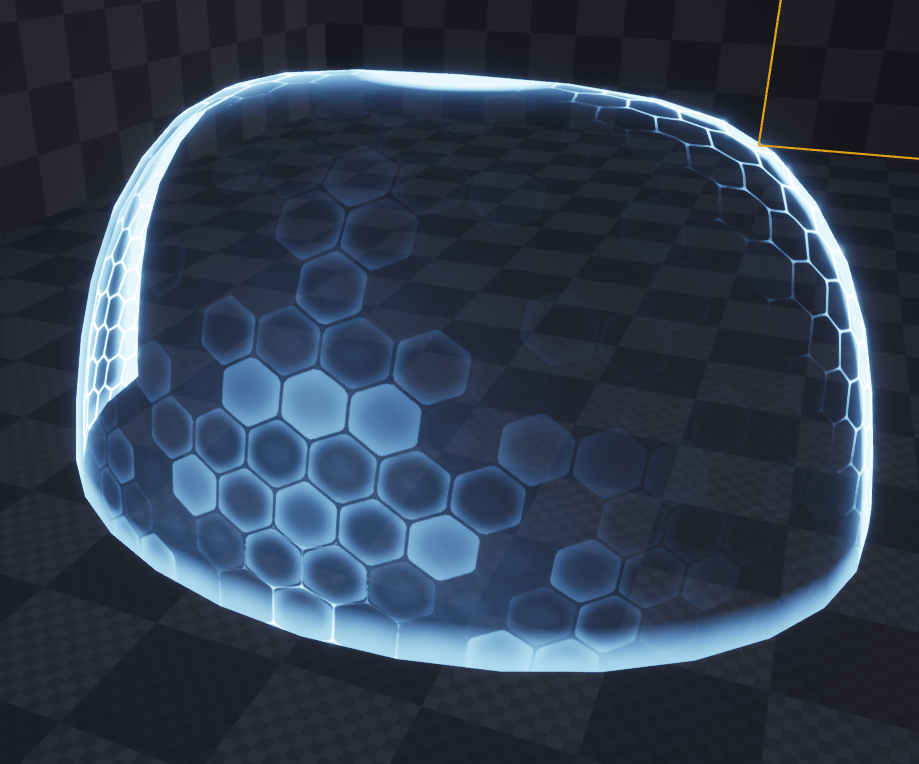 Hey guys! Been lurking for a bit. I decided to go ahead and start a project, since just reading and making small prototypes won’t get me anywhere.
I really love OW’s effects and plan to do more studies in the coming days!

I’m not really sure about a lot of parts of this since I’m new to FX and Unreal, although I have an overall idea of how I might do things. I’ll just figure it out as I go along. This’ll be my first FX thingy.

Also, I want to try to be optimal and learn good practices from the get-go.

Here’s the progress so far. Pardon me for the sloppy image, quickly whipped it up.

This would help you then: https://youtu.be/vsae7C1TgZc

Oh, damn. Seems like someone already made a full tutorial Thanks for the link!

I’ll keep trying to figure it out by myself first, it’s fun! 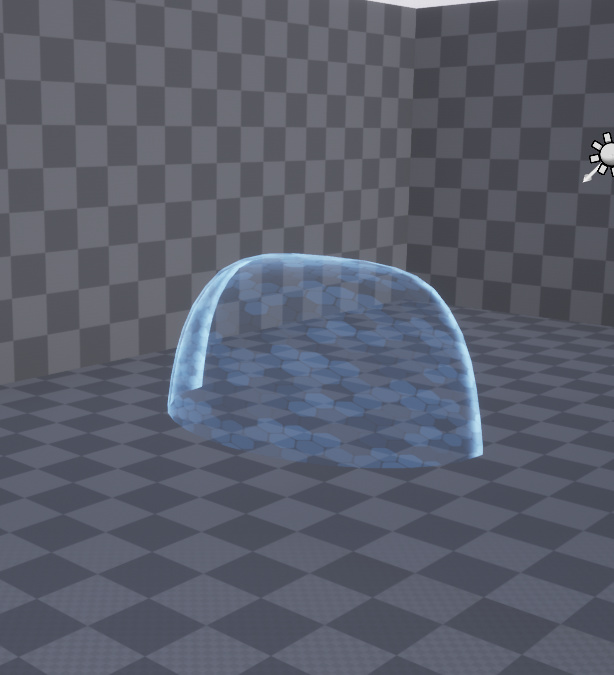 Figured out a lot of things, learning a lot. Have to play with the values and then come up with a way to animate the hexagon tiles.

Getting closer to the finalish shader I think? There’s still a lot of massaging of values to do, aligning the grids etc. Also not sure if using debugSineTime is good or bad performance wise (that’s how I do the pulsing tiles and the streaks of lines) might have to just use simple textures and pan them instead for this. 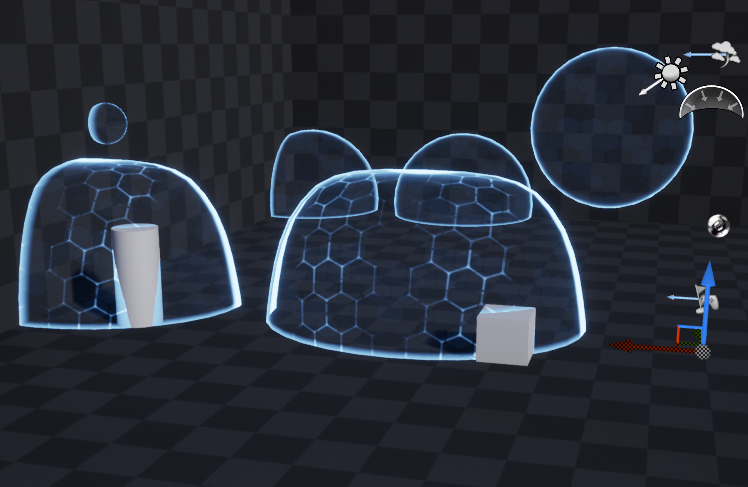 Well, this was fun. Had to figure out how to manage the textures since they’re different, sync tiling and make parameters to make it easy to art direct/vis dev it later.

Also did some misc cleanup and added the streak thingy. Have to make it go only from the center out now. (right now it ping pongs)

I think I’m done with these textures for now. 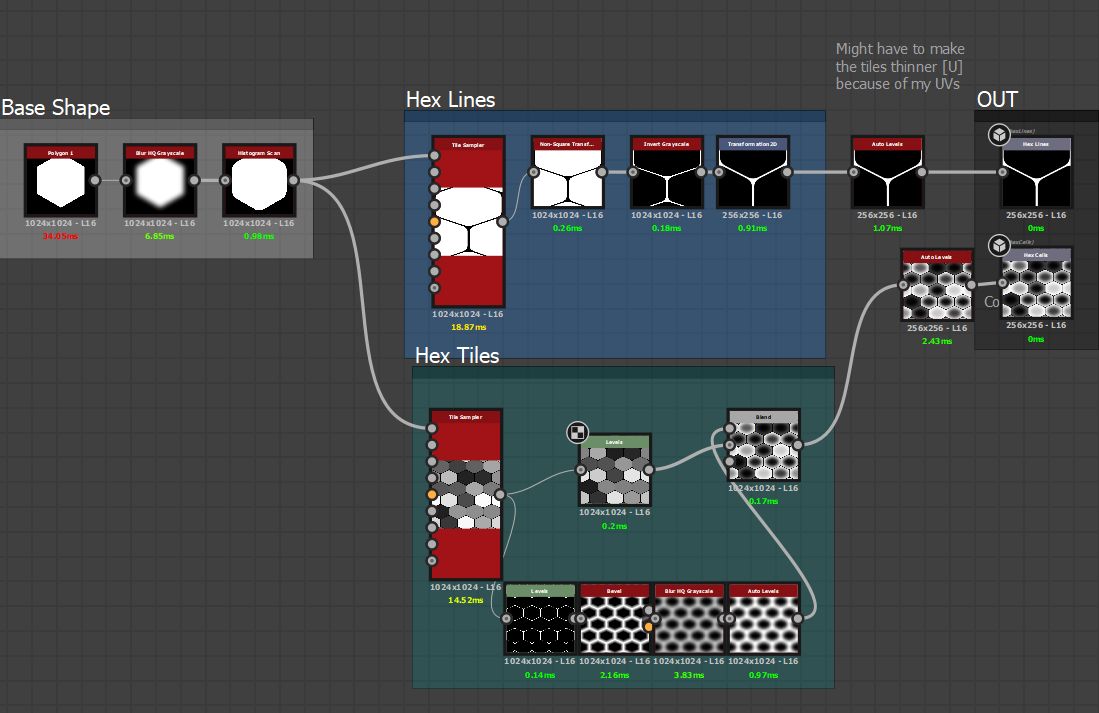 This is hella fun. Time to sleep now, though. Going to see what I can do next. Not happy with how the hexagons light up yet, have to stare at it in game to figure out how it looks so clean in there.

Thanks to Dethrey and Jaybles I was able to figure out some things for the shader, and AlexU helped me figure out to set the texture to mirrored to avoid the entire UV offset assembly, eliminating the weird UV tiling issue I had.

The values are obviously wayyyy too overcranked. I think subtlety is key with shields, especially for clean/stylized artstyles. I also want to add a master CameraDepthFade (learned from DeepSpaceBanana, awesome dude

) to fade it out a bit if we’re close to the shield. It always bothered me (especially before the visual update on shields/barriers). The Symmetra ult still kinda bugs me especially if two of them are overlapping or present at the same time. I could probably use a weird depthfade to fix that scenario with some math haggling, might use this shader and recreate the ult and try to make it less cluttery and more elegant. Love their work though, I hope this isn’t rude.

Also the current depthfade and fresnel are a bit wonky right now. (notes to self)

I’m going to call it done for now, although there’s a lot that I can do still.

Using two 256x256 and one 512x512 texture for this. I tried to optimize it as much as I could. I think it came out alright, learned a TON but I feel like I’m at an impasse and just playing around with numbers so it’s time to move on.

I don’t like how there are some artifacts in the textures but that’s probably because of multiplying for emission and what not. I could probably tweak it out by playing with the numbers (I might later). It’s funny because they exist even in the game, although not as much.

I had to remake the tiles texture from the lines so they fit together without a bunch of additional monkey business. 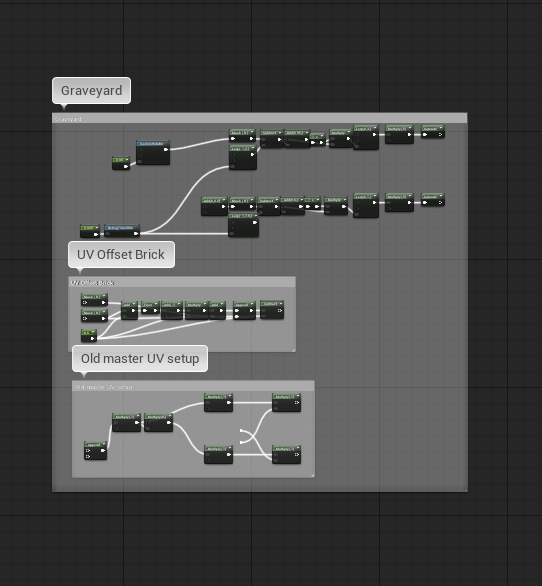 But hey I did learn a ton of things from doing that.

Here’s the final graph for now : 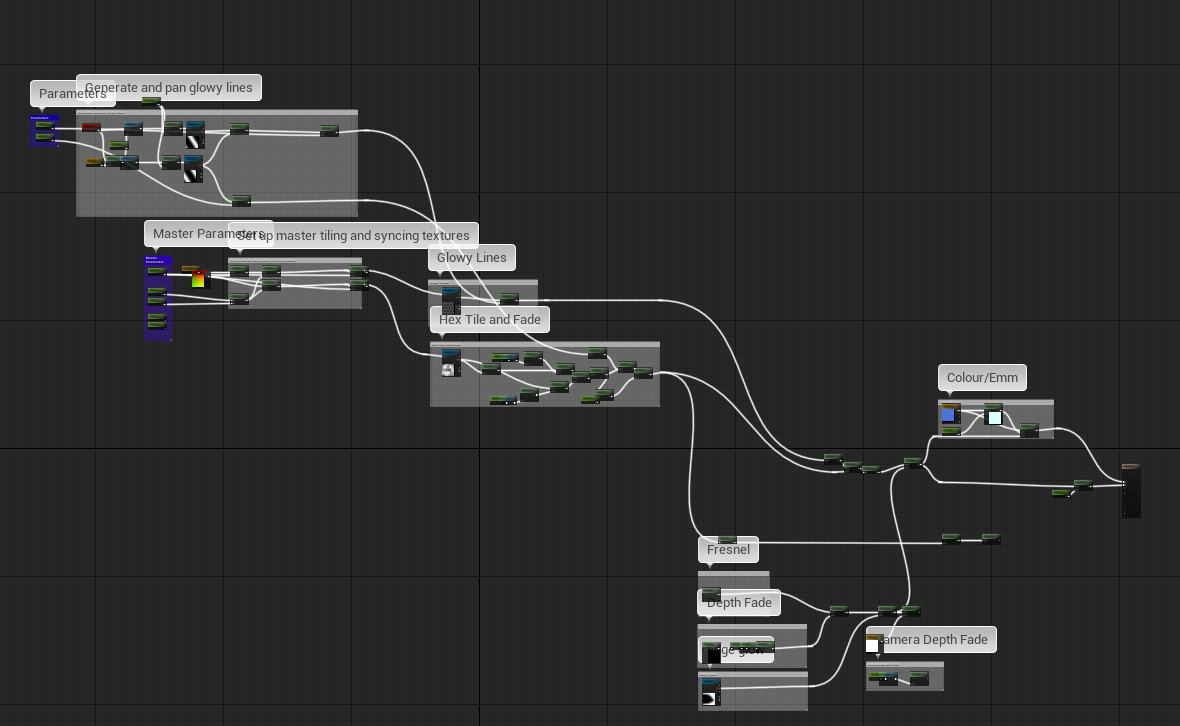 I’m going to revisit this after I learn a few more things and do the damage decals, spawn and break FX/animations. Definitely going to play around the Symm Ult thing though.