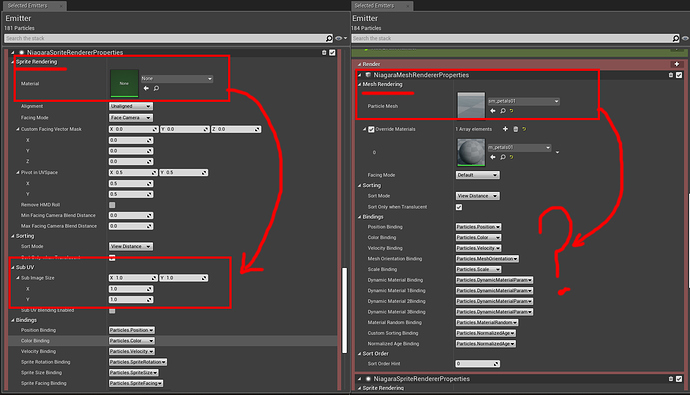 if some one can tell me if there is any way to use subuv on a mesh in niagara it will be very helpfull.

What would you expect that subUV feature would even do? Meshes are rarely unwrapped in a way that would make sense to it.

If you want something that scrolls along the uvs, just limit the size of your sample area and animate it using a value fed into the material (dynamic parameter, particle colour, etc…)

same thing i am trying in niagara.

to be fair it’s a parity thing. You can use mesh sub uv from UDK onwards in cascade, and it does come in handy.

I use this a ton, especially for anime-style electric arcs, leaves, and muzzle stuff. It could be he’s not using the right texture sample in the material though, unless that version of Unreal combined SubUV and the standard texture node

Oh, That’s probably one of those thing which isnt’ implemented just yet.
You can emulated that pretty easily using a material. 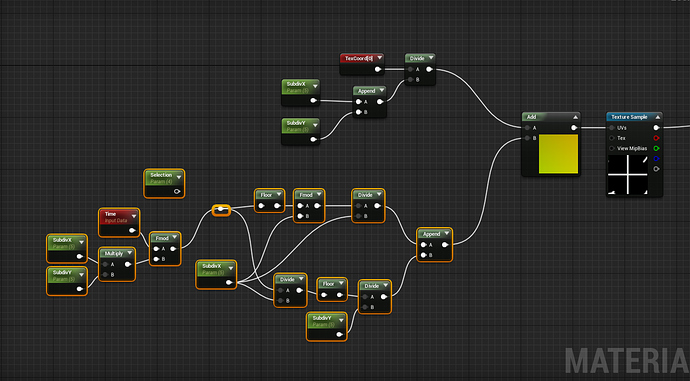 @alex.underhill I thought cascade was migrated from udk? Is that not the case?

@Travis I don’t know if that is a bug or not, but in my experience subuvs on billboards work without acctualy using the subuvtexturesampler. That stops working once you started using meshes though.

Yeah there are weird quirks between the two. SubUV won’t accept anything going into its UVs input, but it will use Cascade’s linear blend setting, and you can use both SubImage Index and SubUV Movie on meshes. The standard Texture Sample will accept UV inputs for distortion and such, and I’m pretty sure you can use Random on meshes, but Linear (or at least Linear Blend) will break when using it on meshes.

I just want to play a flipbook animation on the mesh renderer, is this not possible currently?

It’s supported now, just make sure to use the subuv sampler

Which subuv sampler? I’m using UE5 and there is a node in particle update called subuv texture sample but it doesn’t seem to be working.

In the material, you’ll need to use the subuv sampler node instead of texture sampler.

hi, any chance you know if it is safe to use sub uv sampler as texture sampler as well?

Hi vandearica,
It depends on what you mean by safe. It would be ok to have a particle use a material with a sub UV sampler and if the sub UVs in the particle emitter were not set up (or set to 1x1) it would display like the texture sampler would. Using sub UV to sample a brick texture on a wall wouldn’t be the best practice though.

hi MRvfx,
this info is enough to answer my safe question, thank you so much!