To keep things simple… Unity has subemitters, which basically attaches one particle system to a parent. In Niagara, its seems like this is done through Location Events (unless I’ve missed something) I’ve set this up to where one system spawns at the location of the other system, but how do I control, emission rate, and or can I have them emit from sphere/cone locations? There doesn’t seem to be much control for the system receiving the event. Can someone shed some light on this for me please? Is there another way to attach systems to eachother? Thanks!

Sounds like what you’re looking for is user variables. In the system settings (blue node) you can define variables that are shared between emitters. Say if you wanted a specific spawn rate shared between two emitters - you can add a new float parameter, drag it into the float inputs of each emitter and they will share the same value that you will need to define in the system settings. Spawn locations can share vectors and etc, you should be able to define any variable you might need in there.

System/User variables are also exposed so you can tweak the values for that specific system in the world/blueprint or wherever.

I think I figured out what I was doing wrong. Tweaking these numbers in the pic,I was able to get a denser emission. However, I still am having trouble getting the system receiving location events to orient to the system it is attached. For example, if the system sending events, shoots up and gravity brings it down, when it changes orientation and starts to fall, the system receiving the location event does not change its orientation like the first system. Do you know how I can get the second system to follow along with the same orientation? Thanks for the help! 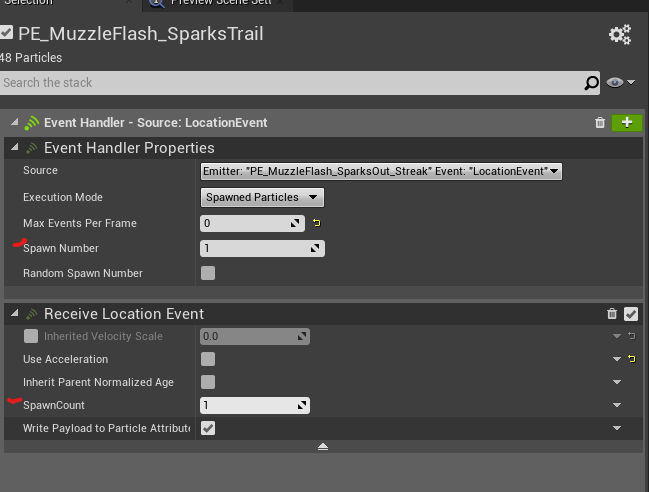 By orientation do you mean position or facing angle?

Its a little difficult to understand what’s going on without a video of what’s going on / pictures of your emitters. Emitters receiving location events should be updating the particle position to match the source emitters particle position per frame. Facing angles can get a bit more technical and can require a bit of troubleshooting depending on the effect and what you’re trying to achieve. It sounds like something could be in the spawn script rather than update.

Here’s a basic set up of ribbons if there’s any comparisons you can see different.

Yeah, I have had this issue since the beginning with Niagara. There does not seem to be an easy way to use subemitters. I just want a continuous stream of particles coming from the particles from another emitter. But there doesn’t seem to be any easy way to do that - the location event stuff only triggers bursts. And ribbons aren’t the same, I need an actual stream of individual particles doing their own things (and as you said, possibly emitting from sphere locations etc).

So why not just use the Particle Attribute Reader?

Have you ever googled that? XD
unless you go down a few pages, the documentation is rather… poor. sadly.

Particle Location Module Mini Tutorial Warning: Check sim targets, attribute readers can currently not read between cpu and gpu so your source and target sim targets need to be the same! The intention of these mini tutorials is to have easily searchable reference for implementations of some of the newer (or altered) features in Niagara. Using the particle attribute reader data interface we can make a reasonably optimized particle location module. The goal is to find, on execution, a valid p…

But it’s documented in the editor though? If you don’t want to build your own, just drop in “Sample particles from other emitter”. It tells you exactly where to enter the name of the other emitter, and it has click by click support so you connect everything right.

sadly this doesn’t come up when googling.