Hi everyone, after a while of lurking I decided i really wanted to join in, so here we go my first entry. After seeing everyone’s work for a while it feels pretty intimidating but we’ll see how far we get!

My idea for a Dot effect is a nasty tick swarm that suck out blood. I haven’t made sketches yet but I’ll post updates as it comes along.

Best of luck to everyone and please if have any feedback or criticisms let me know, I’ll be happy to hear it!

It was a really fun challenge! and it was fun to see all the threads, best off luck to everyone finishing up their projects

P. S. I did something in OBS and for some reason my captures look rather crunched, I couldn’t figure out why, my apologies 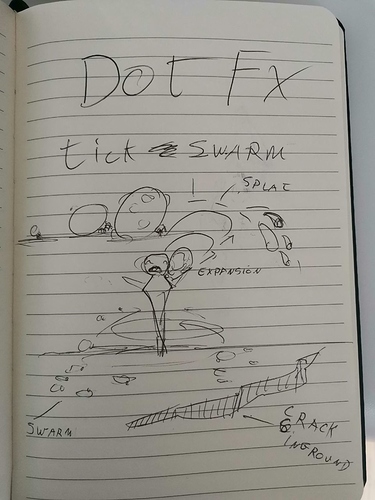 A very quick sketch mainly to keep myself on track. I want to start building 1 tick that can expand its stomach. Maybe I’ll keep it as 1 to 3 bigger ones that are well readable on a screen instead of a swarm of little ones. I was thinking maybe its fun to spawn them from a crack in the ground but at the same time, I could also grow a patch of grass where they jump from.

Keeping an eye on it! It’d be cool if a lot of little ticks formed a giant one

oh man, that could also be very cool. No Idea how I would visualize that but I can keep it in mind for sure! maybe a swarm of particles that swarm towards a point cached bigger version. thanks for the idea!

I’m starting to regret this, ticks are probably some of the most disgusting things to roam this world. Look at this demonic little asshole. At the moment I’m working on a model I can blow up using blend shapes, I’ll post a screen or gif when I have the start variant and the blowup blendshape. 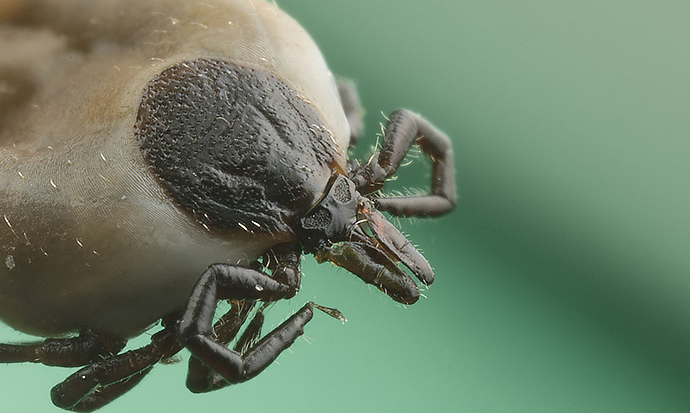 a quick update I finally started to work on my meshes

I’ll throw the main tick for a quick pass in zbrush so I can paint its main color scheme and play with the silhouette a little more organically (also better legs)
: 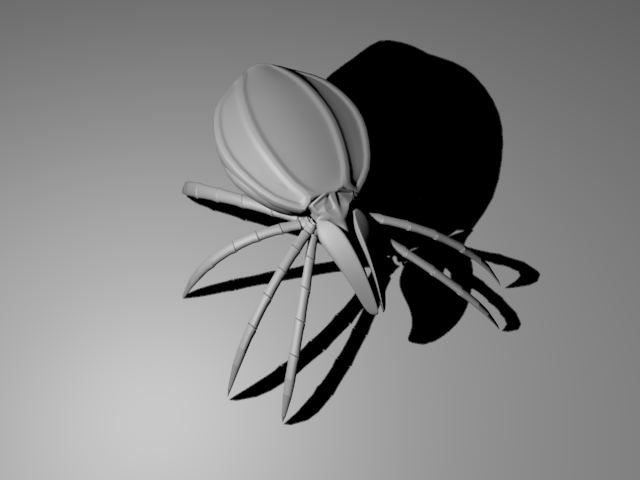 I feel like I should pay a little more attention to the head, because in the picture above it looks like evil incarnate and mine looks a little sad.

Before going into details, I’d suggest you to block-in the main VFX timing, shapes, colors, etc, so you can have an overall vision, and then direct the art from there.

you are right I guess, I tend to get caught up in details that don’t really matter yet. Thanks for pointing it out

Took your advice @Lush I started blocking out my animations, it gives me a much better view of where I am going and thanks again

I’m also sharing a little gif of the shader I am building for my effect! Its a noise map panner with vertex deformation. which I added after I made the gif

No problem! Looking at the gif, everything seems to be working fine. Keep it up, I’m sure it’ll turn great in the end

Can you make a VFX of someone crushing one of this piece of shit, with lot of blood splatting around and stuff ? This would be very cathartic

Waiting to see your progress !

Hahaha thats a cool idea! I have been busy and have then gotten sick so I have no real updates but I hope to get back to it asap

Hey hey, I’m back after a while! I updated my effect, there is still a couple off things I need to fix/update because it doesn’t really have an end phase or a timer yet. I wrote a couple of scripts to get my effect working realtime instead of just being an animation and to add randomization. I have a spawner object which spawns the particles and the locations where the ticks spawn from, next there is an empty game object which launches the ticks to the target. and then we have the ticks themselves, they use blendshapes to grow. I also want them to grow a little more organically instead of linear. I’m finding it quite a challenge to get everything working but its great fun, I hope you guys like it and if anyone has feedback please feel free to give it!

So for now my final update, because tomorrow I am going on a short camping trip

.
Since my last update I added:

a character and a set animations from mixamo because I wanted to convey a reaction from a “real” character instead off just a capsule, new particles to give the effect some umph, a new shader for the character that lerps an emission value to its max over time, I played around with the timing.

And I fixed a couple off bugs that made me hate my life.

I also thought it was a fun idea to have the ticks suck HP out of the target character, but when they release they explode on the ground each dealing a percentage of damage of the HP stolen as damage in a area of effect. However I didn’t program a HP system so I hope the explosions translate the idea behind it

I also followed a couple of unity tutorials to get a grip on combining C# with shadergraph and to get a grip on the timeline tools, which turned out way easier than I expected. I feel like I learned a ton from this so I will definitely join into another challenge in the near future

I will edit my first post with a capture and if anyone has further feedback I would love to hear it, I just wont be able to apply it anytime soon