Let's talk Spider-Man: Into the Spider-Verse

This movie is fantastic! If you haven’t seen it, leave your desk right now and venture into the cinema

The Art Direction… Damn… some of those shots are just incredible from an Art Point of view. I’ll have to watch it a view more times, preferably in slomo to understand how they actually did some of those effects.
I’m curious as to how we can impement something similar in games.

Things like the Chromatic Abberation for DoF and Motion Blur are obviously something we can implement relatively easy.

The Half-Tone Post Process effect should be possible as well, even though it would need to be controlled in a clever way, so it doesn’t go nuts everywhere. It looks like they are mainly using it in shadowed areas as well as for Bloom. 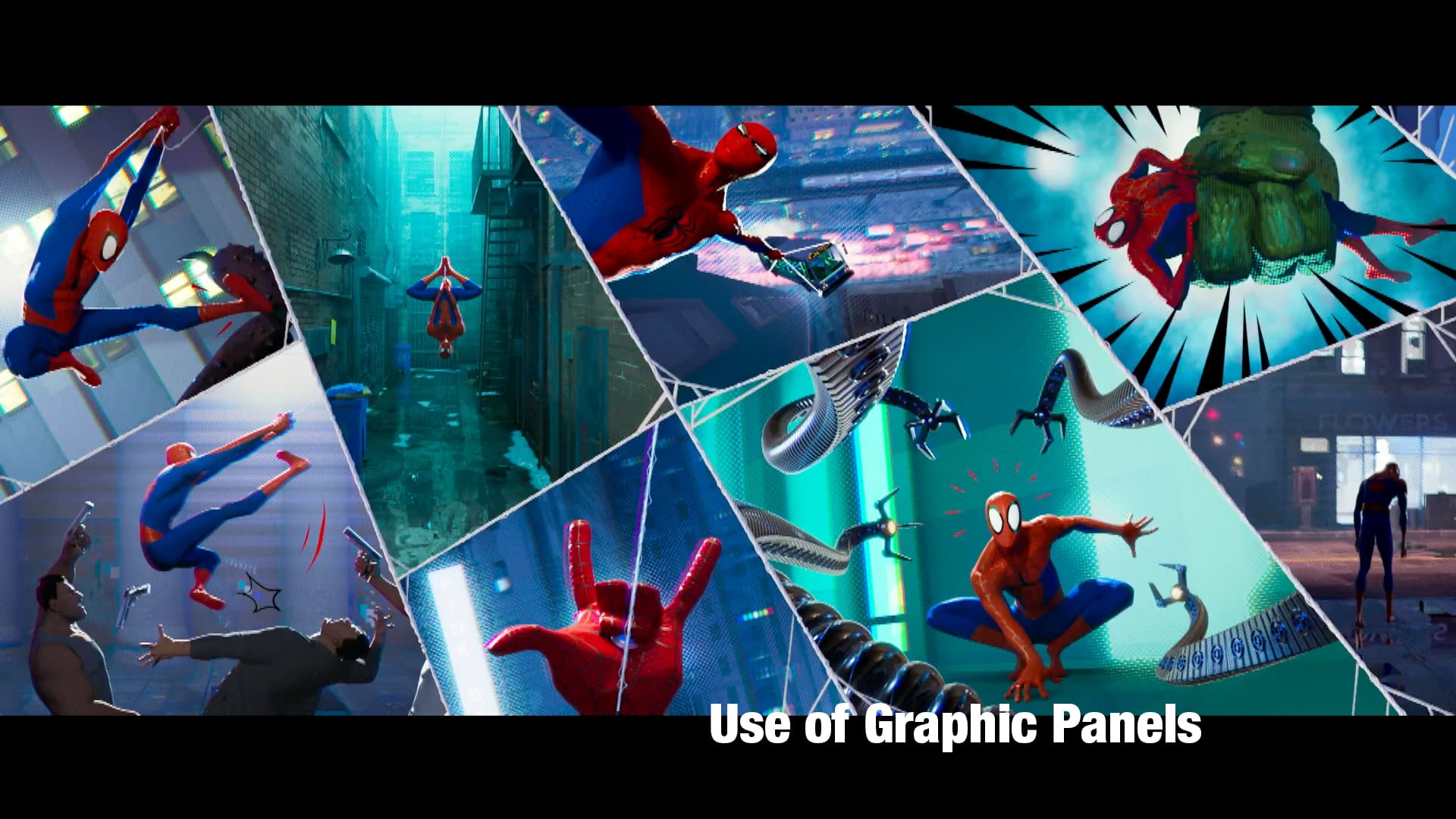 The real question is, how can we add stylised, graphical elements like in this shot, in real-time, without making the player dizzy/overwhelmed? I think in the movie all of those motion-graphics and crazy background animations work really well, as the characters are relatively calm/still in comparison.
I’ll have to look for other refrences, especially of those last bits of the movie, but these kinda show what I mean: 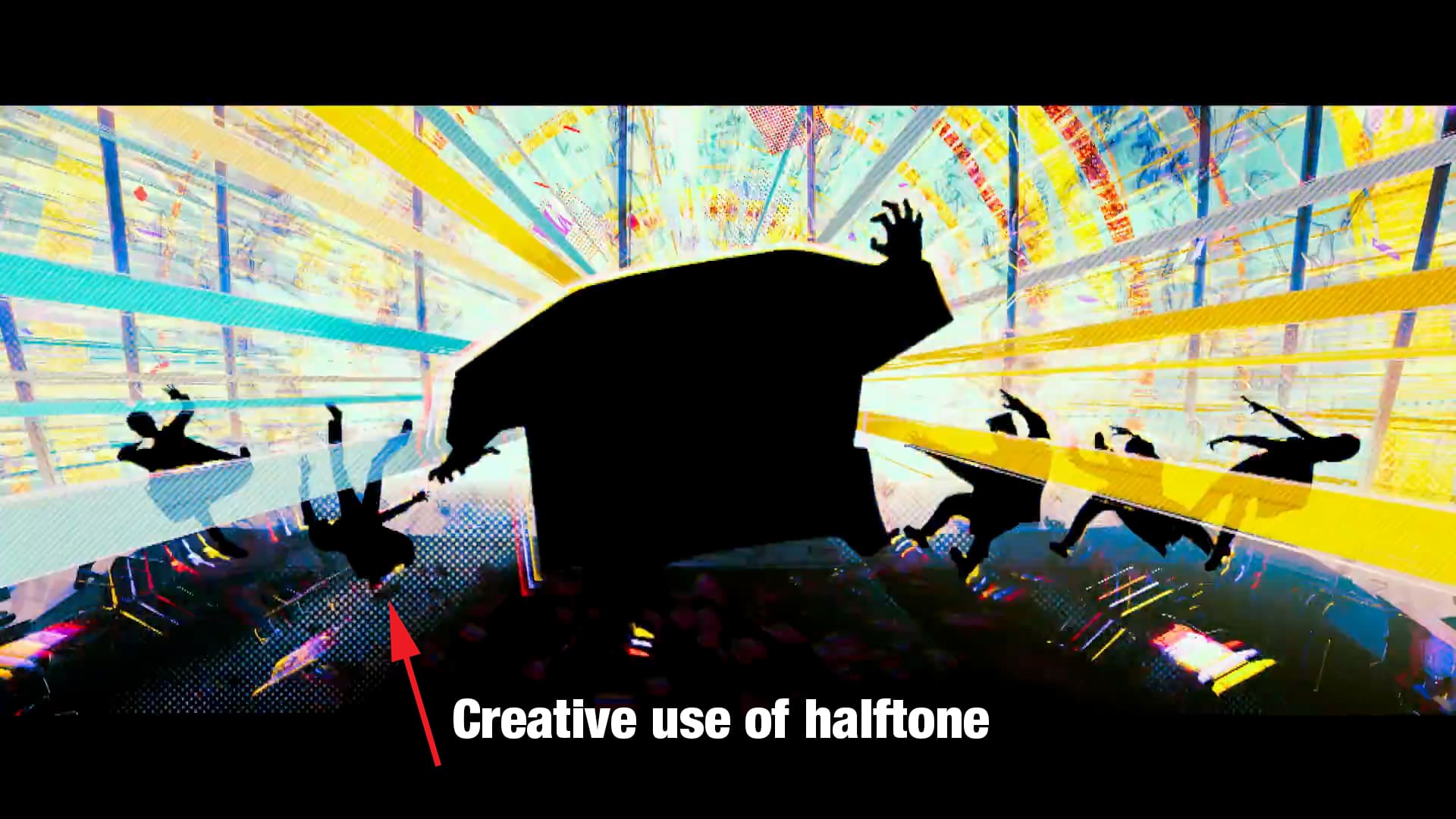 The making-of articles i’ve found so far where these:

Any thoughts on this guys? Is anyone else as giddy about this art-style as me?

Watched it last night, so good! here’s another breakdown article for the list Analysis: The Amazing Animation Behind Spider-Verse

Saw a trailer a long while ago and was catched immediatelly and started stepping frame-by-frame through the video and was amazed - astonished - … no idea where these geniuses suddenly appeared from but this is so mind-blowingly fantastic…can’t describe it. My problem is, that i dont like cinema anymore because of the other people who can’t keep the legs still, don’t shut their mouths and/or eat stinky nachos or crunchy popcorn/nuts and destroyed already several cinema experiences for me. I guess this movie could be a good excuse…I really want to see this.

Watched this on the weekend, I was amazed with it on a visual level. one thing I loved that isn’t really should in the trailer is the heavy use of the focus (especially in the 1st act) to really make sure you are looking at where the director wants you to. I saw it in 3D as well so when there are comic panels and speech bubbles they poped out even more.

@simonschreibt it is a shame that cinema Etiquette has gone out the window these days.

On a real time stand point. the most difficult aspect I think would be the dynamic DoF with Chromatic adjustment based on blur.

I go exclusively to Alamo Drafthouse here in Texas. If you talk or are on your phone, they kick you out without a refund.

They even play voicemails and show emails of people getting mad for being kicked out so you can laugh at them. Extra layer of shame to prevent people from ruining the movie. They even have actors from the movies they play do a small recorded spiel about not being disruptive during the movie.

I felt like they took the “misprint” aberration a little too far in many shots. It had a tendency to undermine the direction of my eye. It made it harder to instantly grok the silhouette. However, in some cases, the complimentary color really made the outline explode off the screen.

The other thing I noticed was that their time stepping wasn’t really handled as artistically as it might have been; it was extremely procedural. Like any given shot was set to a specific frame rate and when the action varied from frame to frame, each shot was seen only as its own pace, not the pace of the whole sequence.

When the angular velocity is high, you can’t have big pauses in movement. I think they underestimated the attraction of the eye to smooth movement. This is something I hate about movie framerates in general. If I can see the individual frames…you lose

Similarly, I don’t think having different rates for foreground and background works very well. I had a hard time finding shots where I thought…“wow, that’s the pinnacle of this technique.”

Don’t let my comments make you think i’m down on this movie. It was very good. And I’m so impressed that they were able to take it “too far” in some cases. It was a bold investment in artistic vision!