Hi everyone, first time doing a sketch --and squeezing it in last minute to boot amongst all these amazing pieces. Really love the variety that this sketch topic has.

My plan is to do a root effect involving ice. It will only encompass the bottom half of the player rather than completely freezing them solid, with the rooting lasting for 3 seconds.

Comments and feedback are always welcome and best wishes to everyone!

I started this around the end of last week, but was rather intimidated to start posting the raw stuff. For the future, I’ll post more in realtime (heh) but kept gifs of the in-progress documenting.

The inspiration for the effect came from a couple of sources such as Mei’s Icy goodness from Overwatch. Plus it’s starting to swelter where I am so maybe subconsciously chose ice to stay cool. 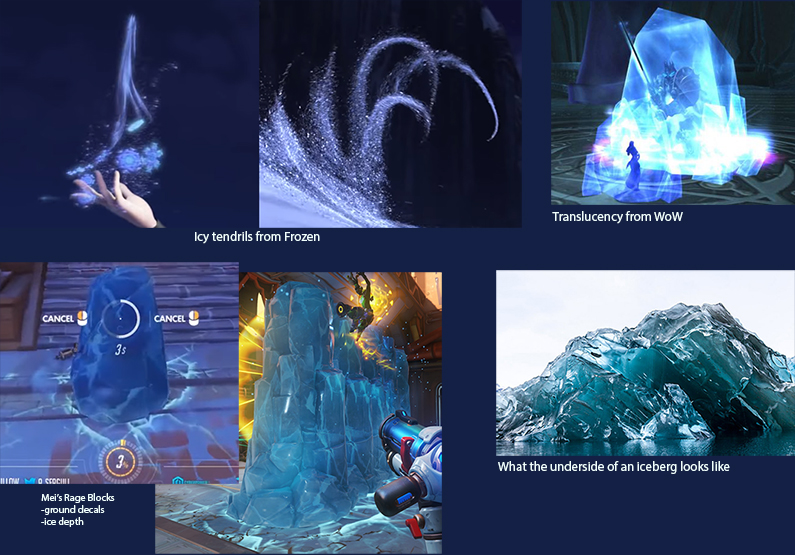 After some hasty drawing in a sketchbook, here was the first iteration with some basic textures and the general timing for the effect.

After that, I wanted to tackle the beginning souler-coasters, making them more of a cohesive swirl rather than mirroring. It was getting somewhere, but the trails didn’t feel “icey” enough.

Then some material experimenting, I landed on this material for the trail. Which looks nice when the trail has a longer life, but probably gets lost in the < 0.5 sec of cast time.

With the beginning starting to look a little better, the actual root effect was next. Using a simple mesh, created a simple material that uses the z-axis world normal for translucency, color, and emission along with some depth fade to help blend it in.

Right now it looks a little bit more like snow than ice, but helps as a first direction.

Going to keep working on making the root ice look more like ice with some textures/refining the mesh and experiment with some world position offset for growing the ice mesh. Also need to go back and soften the textures used in the casting bit, they’re too harsh in places.

This is so cute

I feel like the shapes and timing fit together nicely, excited to see the end result!

A prelude update before the event hits zero hour.

The beginning of the effect has a litlte bit more breathing room now, and there were some tweaks to the coaster times and a cloud whoosh to make it seem like the air was being drawn in and chilled.

The rooting ice mesh has traded in its pillowy-ness to a more stern ice look. Thanks to this amazing twitter post by Alan Noon, the ice has some wiggle to it. Dynamic Parameters were used for the shaking so it could be driven through Cascade (Peek at the simple shader graph here.).
If there’s time, I may have the ice shake and burst at the end instead of just shaking and disappearing as it is now. But I still have to set seeds for a few things and can’t help poking at it until tomorrow.

the final update
https://youtu.be/Bbg8uHnmoEo
Ended up adding in the ice shattering at the end plus a ground effect. If there were more time I would keep playing around with the that ice destruction, but alas

. I’m a little torn on the ice shattering, it’s not particularly powerful but also didn’t want it to feel like the shards would cause any player damage. Overall was fun to do though, can’t wait to dig into next month’s!