Is VR holds the future for Video Games Experience? My Thoughts

Hi, As New year around the corner I would like to shed some light on VR tech with my personal views. As a gamer, Back in 1998 I remember playing 1st ever horror game of my life Resident Evil 2 on the Pentium II PC. I said to my brother what if one day tech evolves to a level that I’d be inside this environment replacing Leon. Today I am seeing a tech mask, It’s called the big head set which a person can wear and enter into the most fantasy gaming world he was once dreaming to enter in and rescue the citizens from evil, worlds from corruption, doing immense missions, Roaming around exotic locations and making friends. Many prominent gaming industry figureheads are highly optimistic about this recent tech and are pretty excited about the Product. It’s called the VR. Is it the thing which kids dreamt about in the classic 90’s era? Will the dreams come true? I can only say at the moment that this we can only find out in the coming years.

2017 is just around the corner and this will be the year in which VR will grow more as a brand itself as well as video games will start to get develop exclusively for VR. Personally speaking. Most certainly VR seems the future . It is technology at the next level whether we talk about games, movies, entertainment. Talking about the games and my personal views, I am in the middle of two poles at the moment. One is the constant innovation in the classic traditional gameplay stuff and other one is entirely different experience altogether.

I have been grown up playing classic Super Mario in Atari, Prince Of Persia’s and Indiana Jones on PC and then Heavy Rain and Uncharted on consoles. Looking back now, I must say that it’s a huge as well as very quick journey in the development of gaming technology. Who would have thought back in 1992 that 20 years down the line we would be seeing such massive graphics, Dual-Shocks, Smooth and seamless controls, Fun online multiplayer and an interactive world on the PSN. The root of the playing experience is classical, You are sitting on a comfortable sofa/chair or even at your bed and on a screen you are controlling a character while chit chatting with your friends and your original environment. While VR you and only you are in the environment just inside the game. It gives an incredible immersion though.

I suppose that VR gaming at this stage is for the hardcore audience it may not attract mass gamers in its initial years. Ten years down the line we might see a very slimmer VR equalvent to glasses as once we have giant computers equal to big rooms and now the things are captured in a smaller and shiner screen possible with our tablets, iPads and little laptops. If the technology succeeds, We might be seeing VR glasses who knows?

Being a professional in games industry, I see VR in a totally different perspective. It is a great chance for developers to create the best player immersion experience like never before. The graphics and vfx will play an extremely important part in creating that experience. It will definitely be a whole new challenge and world for the VFX in gaming.

That’s me, What is your take on the VR and how do you see it in 2017? Happy New Year in advance guys and have a great holiday season

OH yeah mate. Its definitely the thing that the classic 90s kid dreamt of. I remember being a kid watching this cartoon called Johnny Quest where the characters put on a headset and got into this whole 3D world and that was just amazing for that time. And I always wondered about when this was going to be a real thing.

Later on I got to try the virtual boy which at then I thought was my dreams come true. And while it wasn’t the best thing in the market it was pretty dang good for what I thought at the time.

After this I got a bit disconnected from the VR scene and then many years later I heard of the rift headset. And man did that blow me away but I did not have the funds to get into that. A couple years later friends of mine got the vives and the new oculus and some of them even have the PS VR. And its been amazing to try each one of them.

Immersion is something that only the VR is truly capable of which I couldn’t fathom achieving any other way besides trying it. My only complain with this is the motion sickness that I get caused due to vestibular mismatch because you’re not really moving in real but in the game you’re running around doing this and that. Its why games like Batman on the PS VR have click to teleport to point sort of feature.

As far as FX goes I’m not sure how limited we are with this but I would assume it would have to be back to the board for us because we have to maintain that high amount of FPS so we don’t make it look un-natural. Shader trickery and sprites is what I can think of as we need to keep counts low. Personally I’m comfortable with sprites so I would stick to what I know best but maybe someone more technically inclined could chime in here.

Cheers and happy new year to you too mate.

2017 should hold some exciting things for VR. I know that here at The VOID we look forward to getting our experiences out to more people in different places. I agree though that it’s back to the drawing board for almost everything in VR. There are a lot of things that we’ve figured out for traditional video games that just don’t hold true for VR. Locomotion is a big one. There’s some of that for VFX as well. One thing is you have to be more conscience of how you are using billboards. In VR it becomes a lot easier to see that they are flat. Billboards themselves also need a reprogramming. Currently in Unity’s particle system if you roll your head from left to right in VR you will see the billboard twist with your movement. Kinds of things you didn’t need to worry about in traditional video gaming.

As time goes on, and more people are exposed to VR, I think we’ll start figuring out more solutions to these problems and new creative ways to use VR that weren’t really considered before. It’s a new medium and we’re still building around ideas that we’ve learned from watching 2D monitors in front of us.

The most exciting thing to me when it comes to VR is the push for volumetric FX and real time sims / trace based rendering. Particles falls flat on their nose in there and we finally have a reason to push and ask for more.

I don’t think there is anything I despise as much as Flip book textures in all of the VFX techniques and I really look forward to be rid of them.

Most recently, I really liked the effects used in this VR game The Unspkoen by Insomniac Games. Check it out. Loved the fire on the man and the explosions.

Loved this stylized fire on the man 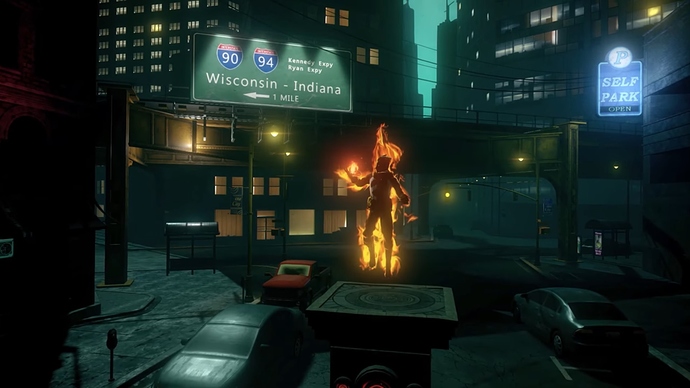 As a fairly new vfx artist who got his start in VR, I don’t feel as limited as I jumped straight in to creating with the 90 fps goal in mind. It’s lots and lots of large sprite sheets for complex stuff and mixing in other stuff to try and distract from the same animation playing on the effect. We try and make as many particle elements as we can GPU. We’ve had to almost re invent the wheel for a couple of things, but it was a good learning process.

I can imagine someone going from standard PC game vfx and even next gen console fx being frustrated or feeling limited though. We can hardly, if ever use distortion/refraction, we can’t pile on lots of different overlapping elements because of the hit from overdraw. Thankfully, PCs have a lot more memory than they used to, so we can use much larger sprite sheets and texture resolutions to get some cool stuff. I like trying to work around and make more with less, especially trying to get some crazy results with my material creation.

I do think VR is the future of gaming, but I don’t think it will change games too much, I think it will just take over the camera controls. Things like 3rd person hack and slash and sports games I think will just use the headset to control the camera angle and rotation. I could see some cool stuff being done with games like Madden taking advantage of VR for instant replays and slow mo plays where you can rotate around the play with the goggles.

Void is looking fantastic, Its like VR 2. Indeed a commendable effort to built all those centers and let people allow to have a real virtual experience.