Im working on this Sparkler Effect and im trying to use Seed to make the Sparkle Emitter match up with their cores from the Core Emitter using a seeded Sphere initial Location and shared motion related modules. However, some of the sparkles don’t get a core and visa-versa. I tried to include as many of the relevant settings in the screen shot. any help would be appreciated. 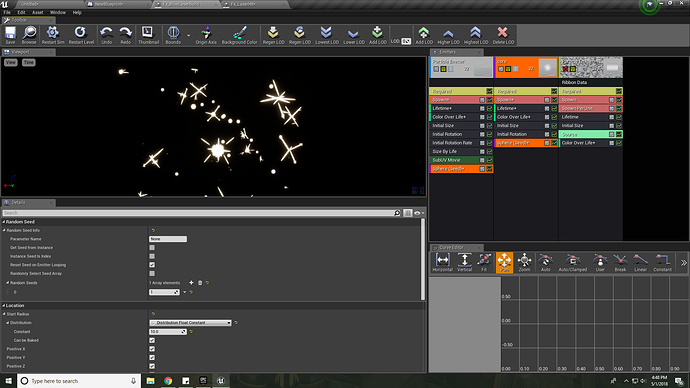 i dont think thats how the seed module works - try using Emitter Direct Location instead - you just have to specify a source particle and it will place one in the location of the other. Just be careful to keep your numbers of each particle the same, as i think it defaults to the particle origin if it can’t find one to attach to.

Using the Sphere (Seed) module and giving two emitters the same value for Random Seeds should give both emitters the same random values resulting in them appearing on top of each other and moving exactly the same way as long as only the seeded module controls their movement . Sharing the modules (Shift dragging one emitters module into the other) should result in exact copies that update each other, meaning their Random seeds and other values would always be the same. I started over and got the results i was looking for so there must of been some other value that got screwed up.
I don’t know how emitter direct location works though so maybe that is a better technique.