How to make the dissolve shader to ignore the seam?

Question-Man here: Is there a way to make my material ignore the seam of a diffuse texture… ? I made a dissolve shader in UE4, but the problem is that the model’s texture wasn’t made seamless. As such the noise textures i use for the dissolve highlight the seam.

…Without having to re-do the texture (the artist that did that before isn’t there anymore)?

you can try using another uv set for the dissolve.

to elaborate a bit on what the others above have said:

if the object is not moving then you can use the world space coordinates to map the noise texture - https://www.youtube.com/watch?v=8aYe54XrZYI should explain it.

if your object is moving while it’s dissolving you cant use a projected texture because it’ll look like it’s swimming as it moves - so you can just use a second UV set to unwrap your object for what you need without affecting anything about the way it’s been textured.

its also possible to use the objects bounding box to project a texture in local space - World Bounding Box Based UVW? - Programming & Scripting - Unreal Engine Forums which might be a better solution depending on how many and what you’re dissolving.

Thanks a lot. I was askng myself if i was too dumb to understand what i’ve been told, lol. Anyway thanks again, will follow what you poivided and update the post if i find a solution.

Soooo i did this, and it worked ! More or less, at least it doesn’t cut as hard as before: 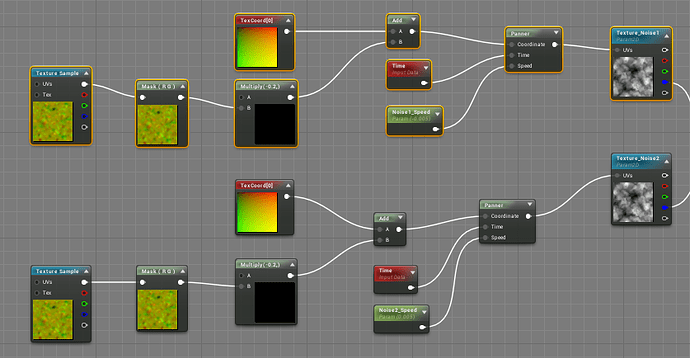 If the object is moving you can still use local space coordinates in the same way.

so you’ve just added some noise to the UVs which will break things up but you’ll probably still see the seams in the dissolve.

Or you could use a 3d noise instead.