Hey, this is my first entry for the monthly sketch. Looking forward to some feedback!

I finished college some time ago and am slowly getting back to my studies, so I’m hoping to improve my skills by the end of this sketch.

For this effect, I’m going for a visceral mood using teeth, tentacles, “black gooey thingy”, and stuff like that. 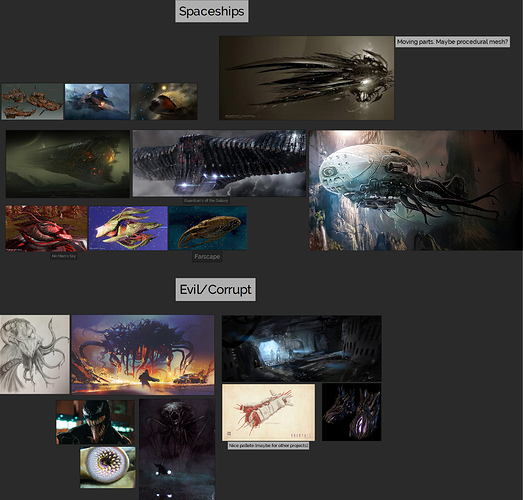 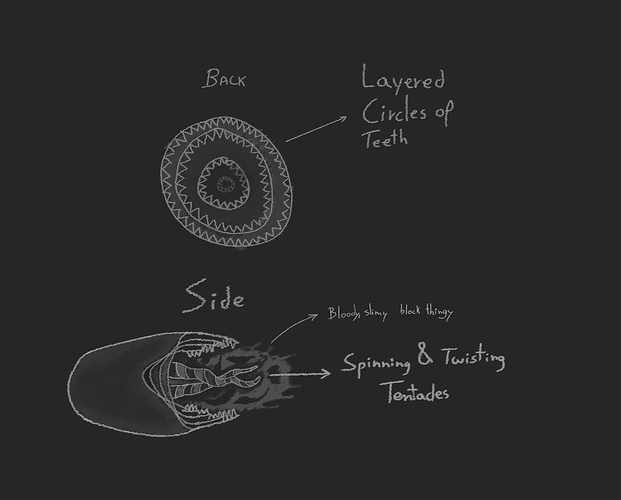 Here are my updates for the first weekend.

I made a mesh for the main engine, tentacles, and teeth. 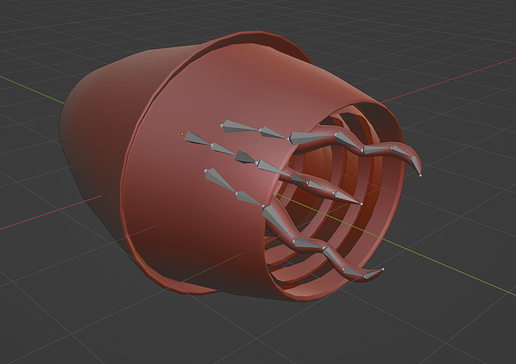 I rigged the tentacles, and I’ll try to use some procedural animation for them!

The layered teeth are all one mesh sharing the same UV space. I used Substance Designer to create a simple texture for them and will make a mask to pan the UV at different speeds for each layer. 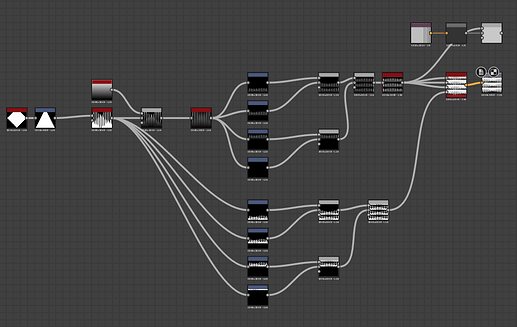 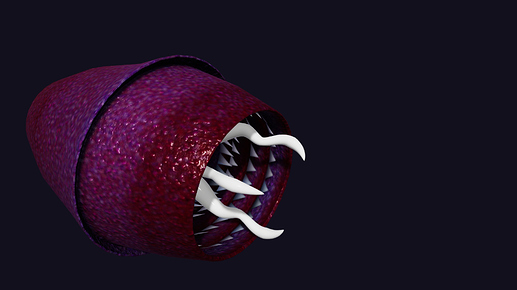 I’m thinking about scrolling different textures in the main engine to enforce the feeling that it’s all alive and moving.

Next week will be focused on particles, materials, and animations.

This weekend i’ve worked a bit on shaders for the main trail, which does panning, edges masking and UV distortion. I also animated the material for the engine body to keep pushing the feeling that it’s alive. I thought about adding a beating-hard animation to it, but I’ll leave that for later and focus on more partciles now. I also added an animation for the tentacles to make it look more interesting.

One trick I did was adding a second material to the body and tentacles using the same shader as the trail but with a low opacity to make it look like it has some kind of alien-tech or magic to it.

One problem I’m currently facing is the clipping between tentacles and the trail, which will probably be more noticeable when I add more particles. I thought about adding a soft particles multiplier in the shader, but I’d love any ideas.

Hope to update it soon and hopefully get some feedback!

alien-tech or magic to it.

hypnotic cuttlefish skin is pure evil, they do that to mesmerize their pray just as they are about to attack: LOVE IT! 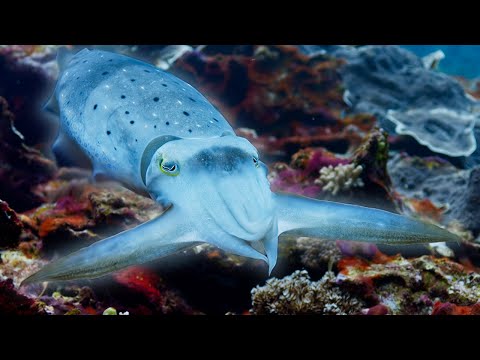 you’ve got slime, ink, and alien feels too

Woah, that’s such a cool reference! Thank you!

I searched a lot for stuff like this, but I only looked to games and movies. I have to remember looking to nature next time I’m looking for refs lmao

I’ll try to incorporate that in my project, thanks again

Following @Torbach suggestion, I’ve looked for more references on Cuttlefishes and other animals from the Mollusca phylum. I’ll try to explore this theme of underwater animals, and for that, I’ll do two things:

1 - Waving colors transitions, like the cuttlefish example.
2 - Update the model and animation so it looks more like a squid/jellyfish swimming. For the “ignition” I’ll try an animation similar to the cuttlefish grabbing its prey, because I think it will look more aggressive.

For the colors transitions, I’ll try using vertex colors to modulate between different colors in the shader. 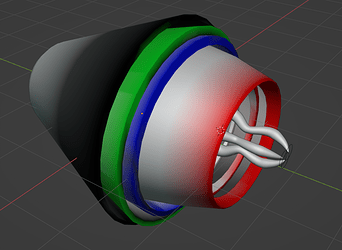 Sketch for how I imagine the animation

For the “aggressive” moment I’ll do a shockwave + sparks, but one problem I’m facing is imagining how I’ll do the particles for the “chill” moment since I want to convey that the engine is still operating and accelerating forward. But I guess that’s a problem for tomorrow!

I’ve worked on the engine shader to add that wavy effect and worked on the particle system to add a better trail. I wanted to do a lot more polishing, but unfortunately, I don’t think I’ll have much more time this month. It’s being pretty fun tho!

I tried adding more tentacles, but it felt way too cluttered when the VFX was present. If I ever redo this project, I’d like to sync the animation between the mesh and the tentacles so they have a synchronized timing. For these finals days, I’ll try to work a bit more on the trail so the edges aren’t so noticeable and add more effects to make it more interesting.

Have a good weekend everyone!

Update: Added some sparkles and glowing VFX to the particle system, added vertex animation to the engine shader (using the same mask used for glowing in order to keep them synchronized), updated the skybox, and added light to make it more cohesive.

I still feel the teeth are not looking really good because of the particles’ blending, but I haven’t figured out a better way to do it yet. I also had to solve some problems regarding timing for the animations and syncing everything, and I did that by warping the gradient I use for the emissive waves and also creating and stretching a second UV map.

For the UVs, here’s the first uv map used for regular texturing: 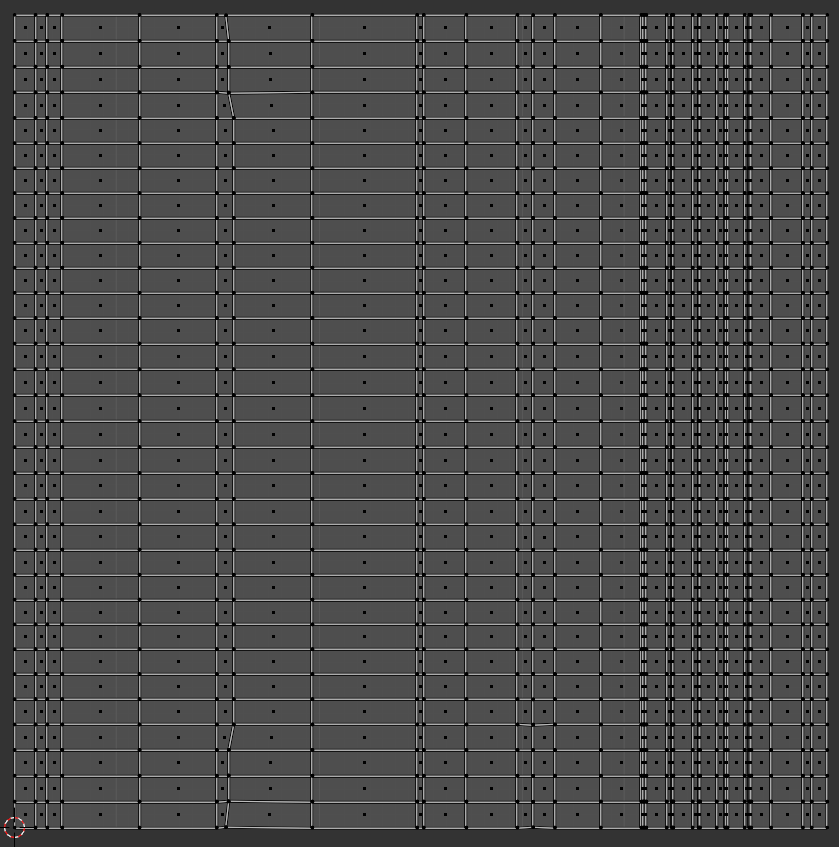 And here’s the second one, where some loops were stretched and the whole map was warped to create a more interesting waving animation: 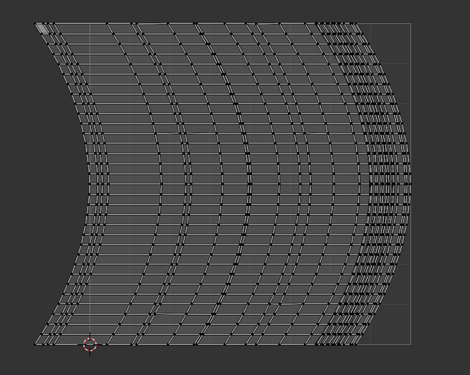 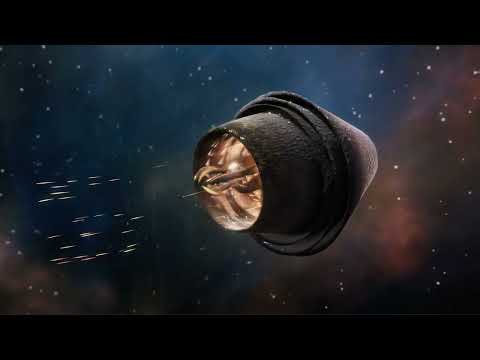 I switched the collor pallete for a white, black and yellow. There was something about the red one that was gore-like and didn’t really connect with the VFX for me, so I think it’s looking much better after changing.

I had a lot of fun working on this project throughout the month and can’t wait for the next theme! I’ll also be asking for feedback and critique on discord servers now that I’m done with the sketch ^^

See you all next time!