Way back on the old imbuefx forum, someone had posted a way to get that old cable tv style static with just sine and cosine nodes in UDK. It was both the fuzzy noise and the jittery horizontal lines that slowly panned up, and for the life of me I couldn’t find anything in a search on how that was done. I don’t think it helps that “Material” “Noise” and “Static” all have entirely differing search results when adding UE4.

Does anyone else remember this, or how to go about doing it? The way I’d go about creating the same look seems way more resource intensive.

Probably the fastest, roughly cheapest method in UE4 nowadays is just drop down a custom node and call one of our native random number functions. This one is 10 instructions: 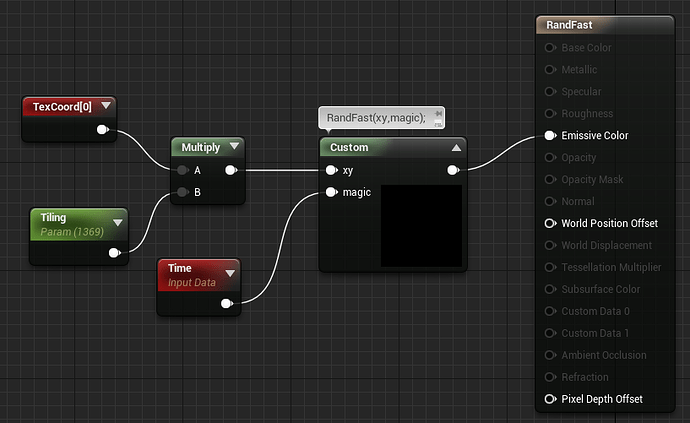 are you thinking of the following post by Wyeth by any chance?

I mentioned this technique in the flipbooks thread but I figured I should separate the conversation and post some info related to the subject. This is a pdf version of Keith’s talk at GDC he was kind enough to put together. The videos sadly are not...

Hah, I don’t even remember writing that. I guess I’m just organically drawn to randomness

Anyways, you can call our intrinsics, or you can recreate the intrinsic functions using nodes if you want to see how they work, for instance the RandFast function I called above looks like this is you were to build it using our node graph instead:

is there by any chance a list of the intrinsic functions available somewhere?

That was totally it!

Bump!
Where would one find a list of these intrinsic noise functions?

Doing a google search for UE4 + RandFast comes up with about 2 matches.

+1, I couldn’t find much on them either.

Just used this today. Thanks heaps dude, it really helped!

Take a look in UnrealEngine\Engine\Shaders\ & the .usf files that are there. RandFast is part of Random.usf

However I would not personally recommend using any of these functions via custom code in production unless the folks at Epic, or your programmers, recommend it; all sorts of esoteric edge case things can come up on platform specific issues, and I’d much rather leave those to programmers!

They are really nicely documented files though, so even if you dont end up using the function calls themselves, you can see how they are done and the reference points.

Wyeth, could you please make this example more simple for a VERY beginner in Unreal? I would really like to do this TV Static like you have showed here, but when I copy what you do… I get nothing. Thank you.

If you want the simpler option, you can use a texture.
Generate some noise using your favourite method (photoshop / after effects / substance / you-name-it), use it as a sub UV texture and read the frames in a random order.

I think I ended up panning two super noisy textures against each other super fast. SubUV method would definitely work well too

There is an issue with this, and that is the Time node. In preview (PIE), it works fine. In standalone/packaged projects however, there is a slow buildup, and eventually a blowup. Using some sort of fractional time works better, but introduces a noticeable buildup effect still. Is there any sort of solution to that?

Erm, I am referencing Wyeth’s stuff, using the RandFast bit (both the custom node and the full node build of it).