Could anything you do in Houdini be done in Mantaflow Blender?

This is a very dumb question and i hope no one gets pissed by this but I still have some beliefs, since they both use FLIP as liquid sim and etc, it kind of feels possible. what are the reason to choose houdini over blender?

It’s not a dumb question at all and don’t worry at anyone getting pissed about a question.

Well technically yes they both use the same flip method but the implementation is probably different as the resources put into each tool are immensely different.

Simply put houdini is more powerful than blender and describing the learning curve with an image: 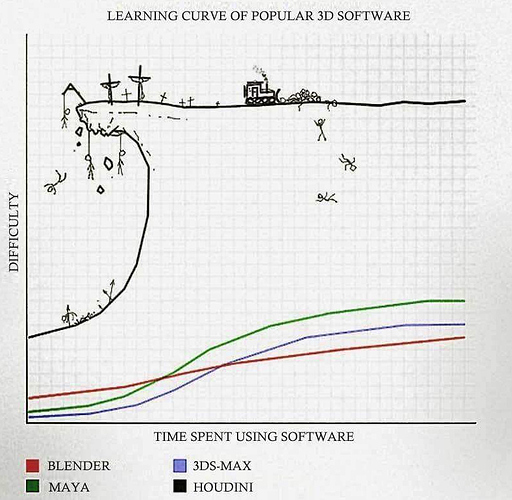 but ultimately, it is just a tool so it all depends on how good you are with it.

edit: to reply to the last part, You should choose houdini if you not only want to learn how to make FX but also how to build tools for your FX and create procedural assets to make your life easier. But if you simply want to make FX you wont be using houdini at its fullest but it still comes with preset assets that can do most of everything that you need out of the box with the possibility to expand on and learn from.

Hahahah great graph explaining the software situation, love it.
thank you for answering, Im just tryin to create an asset with liquid sim over in blender and simply put its going nowhere, Ive been wanting to try houdini but my company hasnt implemented it to their pipeline yet, also thinking about the sheer amount of time i would have to spend learning the software is intimidating, and your diagram proved it XD

I will definitely give it a go in my free time with the free version of it.

Don’t be too intimidated by it, I know it looks like a lot but it is worth it and there are out of the box solutions for it plus a lot of tutorials and support.

Yeah, I would also agree it is worth learning Houdini. It might be frustrating at the begining but I feel it gives you way more options, not only for FX. I’m no expert in the matter but from my experience Mantaflow is not as developed as Houdini.

https://www.youtube.com/c/bubblepins/featured
This channel is pretty good at explaining stuff on a basic level. It might be worth checking if you are starting with Houdini.

Hi sir, thank you for the suggestion!
Ive exclusively used Mantaflow for creating simulations for effects ever since I Became a vfx artist and quickly enough Im already feeling the capability of this simulation. It is very impressive considering its 100% free and it gets the job done with low complexity effects like simple puff of smoke and stuff But it just cant handle the specific, complecated stuff.

I will definitely give Houdini a go, and hopefully convince my superiors to implement it for our vfx pipeline.

I’m not familiar with Mantaflow, but Houdini is (and has been) the gold standard for VFX in film and (more recently) games for over a decade. “Could anything you do in Houdini be done…?” Unlikely; but, it’s more about what you need to do. Is there a problem you can’t solve with your current tools? That would be the place to start. Houdini is very, very flexible and good for solving lots of problems; but you’d probably want to find an example of someone using it for that purpose before diving it.

As for including it in your pipeline… it’s pretty expensive. Bit of a hard sell for lower-budget games. But if you can make something cool with it, might be possible!

Hi, thank you for the input!
As of now Ive been able to create every assets involving simulations with blender.
But sometimes it just feels like Houdini would be able to do it better and faster

I will look more into learning and developing skills in Houdini for when I eventually have more responsibility as an fx artist!