I’ll start by saying that I am very noob when it comes to using Unreal and Cascade. The short of it is, how do I make sense of these particle parameters in Cascade? I am having a difficult time understanding what these numbers correlate to and how to accurately control them. 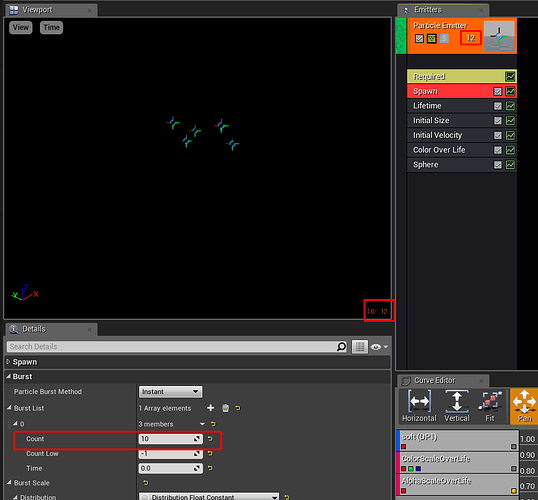 I was a Frostbite user for many years and have dabbled with Unity. Both of these tools make it very easy to quickly control precisely how many particles I’m allowing my emitter. In Unity and Frostbite both there is a parameter on my emitter which allows me to allocate that value with a Max Particles or Max Count.

In Unreal I’ve found the Max DRAW Count here, which I’ve set to 5. After reading a bit more I understand that this will limit the number of drawn particles but not SIMULATED. My screenshot here is showing what I presume to be 10 particles spawned of 12 even though I’m telling the system to draw 5. The screenshot also shows that there are indeed only 5 particles drawing. 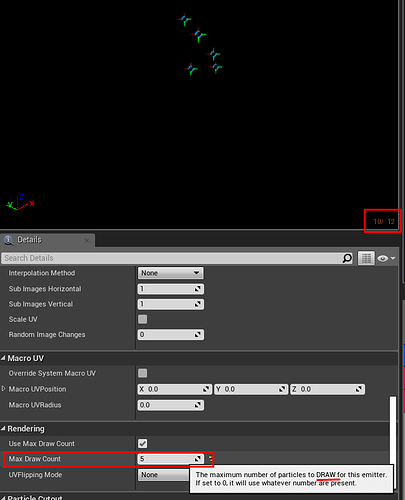 Is there a way to enforce a max SIMULATED count? I don’t want 10 particles. I only want 5. This sounds like a trivial thing but I can’t seem to find a parameter anywhere which allows me to cap the emitted particle ceiling to a finite value of my choice.

I’m not sure what the Initial Allocation Count is however I’ve set it to a value of 2 and notice no change.

Can anyone in the community help shed some light on how I can accurately control my max particles? It feels very wasteful that I’d be simulating 10 particles but still only drawing 5. Sure, thats less overdraw but I’m still paying for particles being simulated, no?

You’d just set your burst to 5. The values in your Spawn module are how you control the cap.

Interesting. That’s what it had been feeling like. Just wasn’t sure if perhaps I was missing some hidden attribute somewhere that acted as a clamp to enforce a strict particle count. All other engines I’ve used have this type of optimization feature. I’ll just have to be very mindful when setting values

Now that I have Unreal open in front of me, I couldn’t find anything else in Cascade that would do what you’re looking for beyond directly controlling your Spawn module in conjunction with Lifetime

Word. Thanks. I could’nt either. Was hoping there was just a main max count parameter that acts as a clamp to your acutal particle count. …so no matter what your spawn rate or Max Draw Count is. You only ever get whatever that Max Count would be.