Hi everyone. My first post here =)
Decided to take a participation in this sketch.
Wanted to make something like Swarm Shield. Where a number of flying creatures are all around you so nothing can hurt you. Original idea came up when I was playing Gears of War. But this is a bit different take in style.
Current state:

Next steps:
-Try to add some refraction to it
-Make it more shieldy with well defined shape of the effect
-Try to make some hit reaction

Cool! how’d you animate the critters? I imagine it was some world displacement?

hey what’s the software that you use

Yes. Each creature is a lowpoly model. Vertex paint defines how much rotation is needed around creatures center (for simplicity I didn’t make different pivot points for limbs).
Red channel defines rotation around X axis, blue - around Y axis. Also there are numbers in green channel to flag rotation clockwise or counterclockwise.
Then a combination of sine waves in shader defines rotation of vertices for the world offset.
The movement itself was done mainly with Vortex Velocity module in Unreal Niagara system. 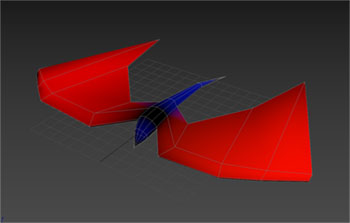 3ds MAX for modelling, Substance Designer for textures.
Unreal Engine for the rest. Effect is done fully with Niagara. Rendered in Unreal.

Made some improvements:
-Added a little more density in effect around character.
-Added a little refraction. As a lovely side effect - this also caused a nice rim light for particles.
-Made a hit reaction. Creatures gather interactively to a hit point, like they are blocking damage.

Probably will consider it done. Will upload a more high res versions soon.

The creatures gathering up at the hit point was a very nice touch! This is a pretty awesome shield!

That effect is really qualitative

He mentioned he used a Vortex Velocity module in Unreal’s new Niagra particle system. They are probably velocity-oriented meshes, so they always face the circular path they are traveling

@Travis is right. Vortex Velocity module in Niagara handles creatures circular movement.
To make them gather at some point I use Point Attraction Force module available in Niagara. It applies a force to a point to all particles. Or from a point if the value is negative.
So I created exposed parameters for this emitter. They are a vector (point in the world to attract creatures) and a float (force to apply). In a separate Blueprint which references this Niagara System in scene I created a Timeline to set different points of attraction and different force values based on time of hit events.

i should start testing out niagara. Thanks!