Hi, I’m working on a waterfall for a portfolio scene (temporary scene with rocks from a water tutorial by Andreas Glad until I get the final scene from my group that I’m working with) and I feel that I need some feedback and tips & tricks how to make it better. First time ever I’ve done water and haven’t worked much with particles/shaders before so it’s been a lot of work testing different techniques. So any tips on how to make it look better or how to make waterfalls are welcome

Edit: For some reason the GIF doesnt loop for me, is it possible to fix that somehow?

Great looking waterfall! Doesn’t that foam clouds do a lot of overdraws?
For making gif loop (and optimizing it) you can use ‘ezgif’ site

It’s quite a lot of overdraw on the foam clouds, but it’s just for a small portfolio scene so I haven’t focused that much on optimization yet. I’ll probably give it a try and optimize it a bit before I’m finished with the scene, busy with an other project atm so haven’t worked on it for a while now. The goal would be to reduce the overdraw to a more proper amount, but we’ll see how much I can fix it and still keep it looking good.

Working on stylized waterfall for my current project so I might take an other approach with the realistic waterfall depending on how things goes and if I find better ways to do things.

The waterfalls each seem to be falling at different speeds, and the smaller mid-fall waterfalls don’t look right to me.

Had some troubles trying to get the speed correct so I tried different settings and it seem’s like I was looking at them too much that I got used to it after a while so it’s good that you reminded me of it, I’ll fix that in the in final version later. And the small waterfalls I’m not even sure if I’ll keep, I like the idea to have them but it was a struggle for some reason to make them look right.
I’ll probably give it a few more tries but not really sure what to do with them.

Speed wise, water is going to fall at the same rate as gravity pulls anything else down. You could put some simple particles into the scene with gravity enabled for reference and try to match up the speed of the panning with the speed of the particles falling. Some modifications to the UVs may be necessary as well, in which case you may want to do the same kind of hack setup reference with particles in whatever tool you used to build the meshes.

For the smaller waterfalls, the biggest issue for me is they kind of sit out away from the main body of the waterfall, but seem to have way too much water for not really cutting into the main falls that much (or at all?), and they themselves fall pretty much straight down. You’re never going to see something like that.

If you look at some reference you’ll see that any kind of rock in the path of the falls are going to cause the water to fan out or outright split the water in two. Water is strong, and anything that’s just a shelf like that is going to quickly erode away, so it’s has to be a big strong rock jutting out cutting the water apart, or a much more significant land mass. Or it needs to be much higher up in the waterfall where the water has less speed. 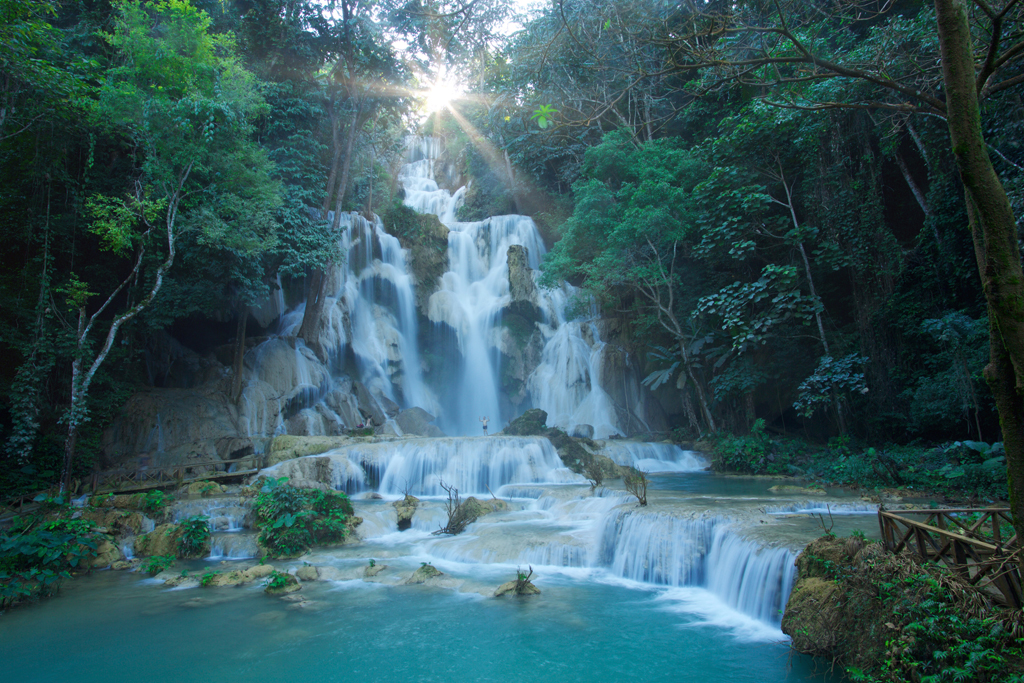 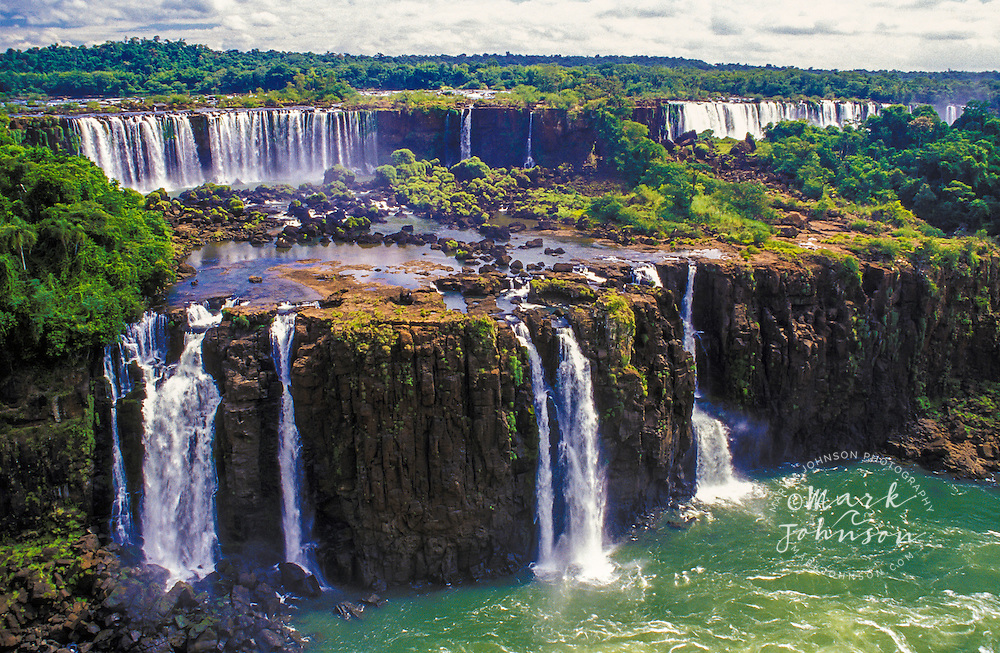 You can see there are smaller rocks near the top, some larger protrusions that really split the flow of water maybe a third of the way down some of the bigger falls, and after that there’s nothing until it hits a much more significant “ground”.

Ohh, that tip about using particles with gravity as a reference is probably going to help a lot! It should make it a lot easier to get the speed to look correct.

I’ll see what I can do about the small waterfalls, looks like it’s a bit more work to get them correct then I thought. But with your explanation I’ve a much better idea how I want it to look at least. Now I just need to try out some different things and see if I can make it work.

Thanks a lot for the feedback, it was exactly what I needed to actually understand what I need to do. I’ll probably try to work with it this weekend and post an update on sunday if I’ve made any progress.

So I remade a few things which I’m not even sure if it’s an improvement or not with the material (a friend told me it look’s better so maybe it’s just me that’s been looking at it too much). But at least the speed should be much better now

I got a new problem with unreal now tho, earlier I didnt make it in the correct scale (way too small for some stupid reason) so I had to rescale it but now I have a big problem with the foam. For some reason it’s popping way more then before (hade some problems with it earlier but not that noticeable), I also have the same problem with the foam on the water that’s not even noticeable most of the time now. And that’s just a transparent material on a mesh.

I’m going the remake all the foam anyways so that it looks a lot better, but haven’t started with that since I got this problem.

Is there anything I should think of when working with overlapping transparent materials in UE4 to avoid this? It’s really annoying because I can’t really use opaque materials for either the particle system foam or the foam on the water. At least not without way more work then if I use transparent materials.

if you give your smoke a higher render queue, lower sorting/queue index it will fix this misery.
or you turn down the material render queue of the tree trunks. In unreal it might be directly on the object itself as I remember ( Translucency Sort Priority ) . Also you could have a depth fade ( note in your material note editor) to avoid future mistake and softer/smoother blending results. Overall it gives me the “hot springs” feeling which I like to think about in these cold days 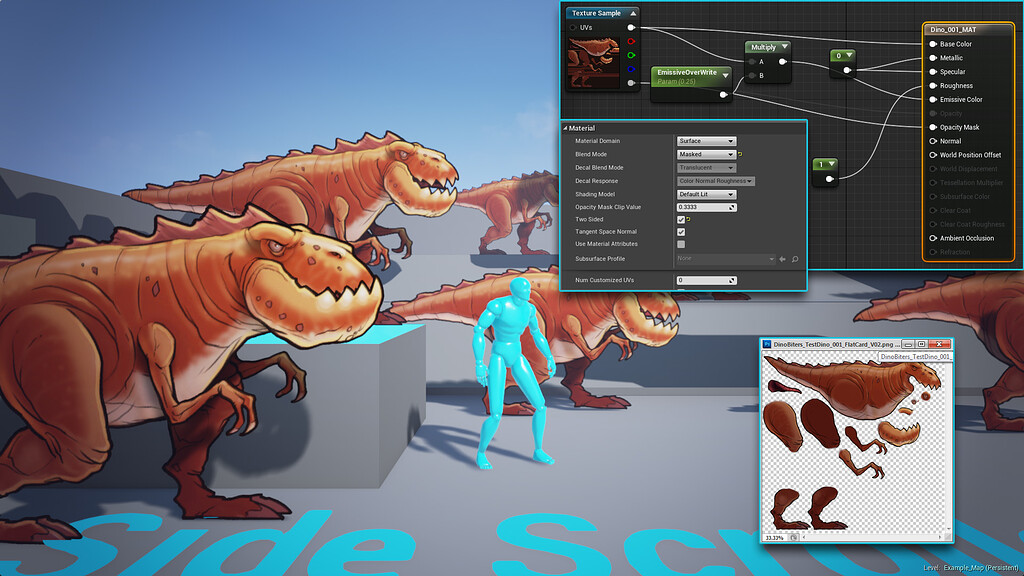 So I am really in love with [Ubisoft’s Raymand Legends][1] and Moon Studio’s [Ori And The Blind Forest][2], being inspired by their work I wanted to see if it was possible to build a similar look in UE4. Right out the gate I have hit a huge road...

Thanks! Changing the sort priority solved the problem so now I just need to tweak the particle system and then I’m finally done with this. Been working on it way too long but at least I’ve learned a lot from it.

So I’ve decided to wrap up this project, spent a bit too much time on it (or rather, had it as a side-project for way too long).
Thanks a lot for all the feedback and this is pretty much how it’s going to look in the end (changed to megascans rocks).

I’ve tweaked the water shader after I recorded that gif but OBS is refusing to record for some reason so can’t make a new one.
But if there’s any more feedback it’s always appreciated. I’ll spend the weekend on tweaking the scene then I’ll consider it done and start focusing more on my new side project, which most likely is going to be a ocean shader (Sea of Thieves water have inspired me too much, so I must give it a try).

Finally done with the scene, a small few changes from earlier and a hell of a big difference in enviroment

And once again, thanks for all the feedback! It really helped me fix some problems.
Any c&c is always welcome!
https://imgur.com/WIsuOLQ

If I have to pick at something it would have to be the hard line where the waterfall cuts the geometry to the left.

That is a darn sexy waterfall. Nice work.

I knew it was something I missed to fix, had so many small problems with the scene that I forgot to make a double check on my main piece of the scene

It should be (I hope) a quite easy fix so I might try to fix it and redo the gif, because every time I look at that gif I’m going to see that cut now

looks great! my only crit would be to maybe mask out the areas below the rocks sticking through the water in some way, maybe with a few splashes on top too - currently they just sort of look like they’re poking through without affecting the water in any way.

Are you using any particles for the main falls? Or is it just one mesh with a really good material?

looks really nice, only thing i would add is, remove the water where the rocks block the waterfall, i think it would give it an even more scenic look…

Some particles to hide ugly edges on top/bottom parts. Except for that almost nothing.
Same angle as the gif but with particles toggled off in the scene. 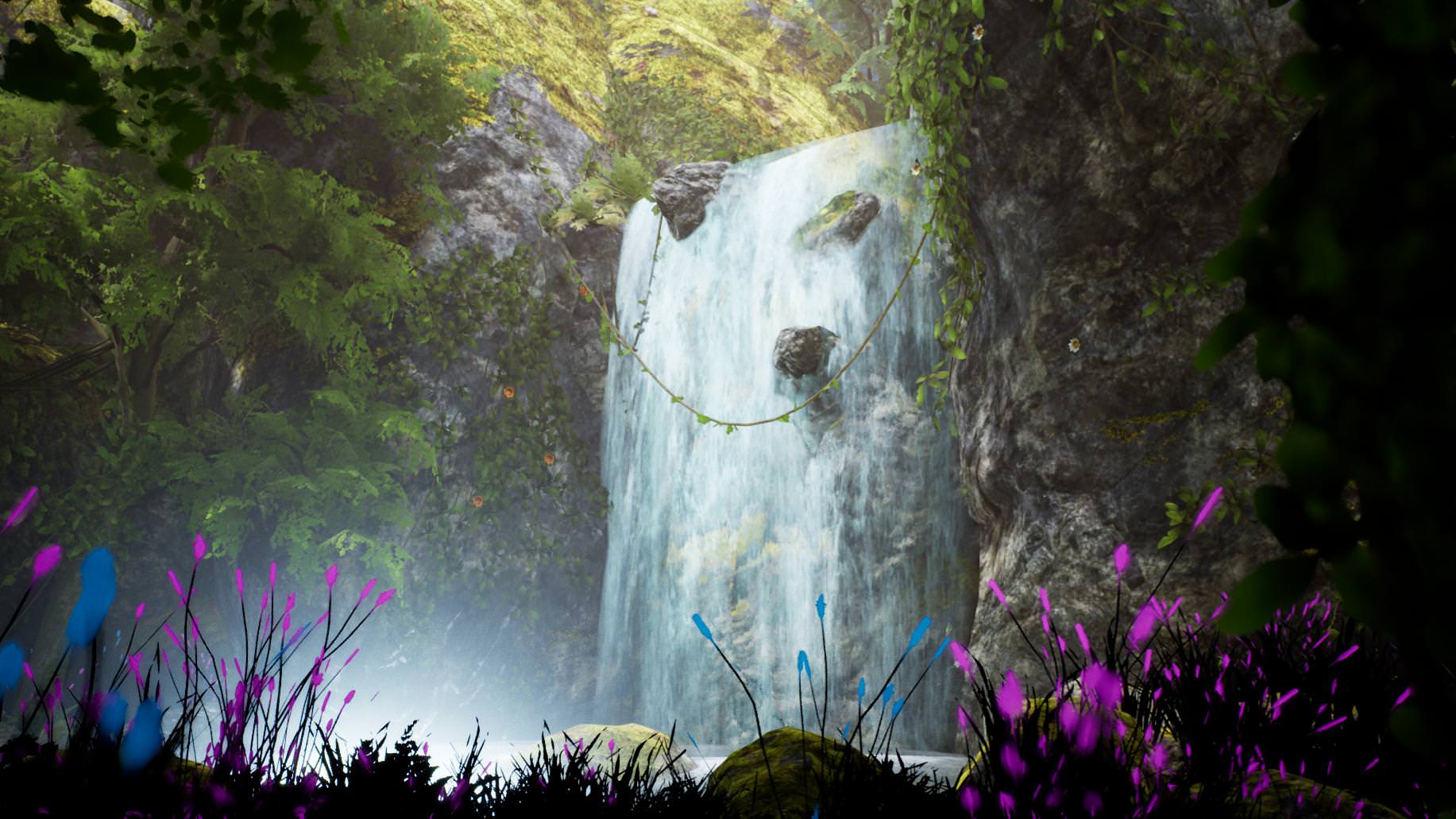