Hey guys,
as my goal for this year was to post a bit more, I’m starting this sketchbook with the work I’ve done for Bleeding Edge. I can elaborate on some of the things a bit more, if people are interested. It’s all UE4 Cascade.
Some of the things we’ve done, which I think are quite cool: 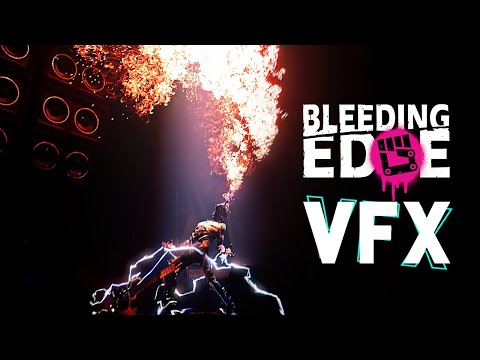 Excellent reel! Your colors and timing are on point!

Nice work! There’s a great variation of punchy and vibrant effects showcased in your reel

This reel is awesome! The variety of showcased effects is really cool, and the colors are so nice!

Really cool! For the beams (setting the spline start/end-points and controlling the tangents) did you use (animation)blueprints?

Did you have a concept artist for the VFX so that color palette etc was already given?

So, the tangents are calculated in code (using the velocity of the characters, the direction of the beam, and lerping between last frame(s) and current frame). Then pushed directly into the particle system as parameters. Could be done in blueprints as well, we just coded it for performance reasons.

I can then controll the ‘stiffness’ (by adjusting over how many frames tangents are lerped), and also how much the beam bends, right inside the particle system by adjusting the output values.
In addition we measure the beam length, so that it bends less when going further away.

Unfortunately I can’t share exactly how it works, but it looks similar to this inside the particle system:

We didn’t really concept vfx (would have been nice though

), I just created color schemes that would fit to each characters primary/secondary colors. We used LUTs/GradientMaps for most of the fx, also originally thinking we could create vfx skins relatively fast, by chaning the LUTs. This idea was scrapped later though, as it just really doesn’t work so well. It works for some effects and breaks for others. It’s also really hard to create all effects for a character re-using exactly the same LUTs etc. Saved me a lot of time though, as I was the only vfx artist on the project for most of the development.

Here are some of the LUTs we use:

Great work, love the electrical effects, overall timing, shapes, color and execution of those effect are well done. Keep it up .

Thanks for the answer! I’m doing such speed/direction-calculation very often as well. As I’m not getting the info from C++ but having to use my scripts, I often lose the first frame as the position from last frame has no infos yet. Bet after this it works well.
I’m still surprised that you can easily set the start- and the end-point of a trail via cascade. When I was doing this for Rime we had to use Anim-Blueprints but maybe I oversaw the easier solution.

I love your color choices. I wonder: Is the lightning “just” a gray-scale texture and the LUT colorizes just this, or do you also change the colors along the lightning so that it’s e.g. brighter/whiter at the beginning and more saturated at the end?

This is super amazing stuff, very inspiring to me as a beginner!