I’m an “old-school” FX artist. Meaning I’ve been in the games industry for 25 years now and first worked with 3D FX in 1999. I do remember noise maps being an integral part of my work since ever (as well as particles).

Generating good maps was something of an art back then. The patterns, the right fall of, the subtle differences that made something look like lava instead of fire, etc. And, of course, tiling. Tileable maps where always an obstacle. Even by the time I settled in using Bercon Maps (a texture plugin for 3dsmax with a profusion of noise algorithms and parameters). Even then, the generated maps where not tileable, and I’d have to move then to photoshop and Offset their borders to the center and make my best with Healing tool or whatever to take away the split and any obvious pattern). I’ve thus always resented the lack of a “tile” or “wrap around” checkbox on whatever software I could put my hands on that generated noise maps.

I’ve not been directly involved in intense FX making for quite some time now, and recently, I came across the idea of generating noises in higher dimensional spaces and using revolution-projections (like, for instance, a torus) inside this space to sample a 2D map that’s fully tileable. I thus indulged myself in creating a tool inside Unity that does exactly that: generates tileable noise maps, using several algorithms (simplex, perlin, worley, voronoi, etc) and having several features, like distortion and fractal noise and so. Output map to disk, ready for use in FXs. Yay! 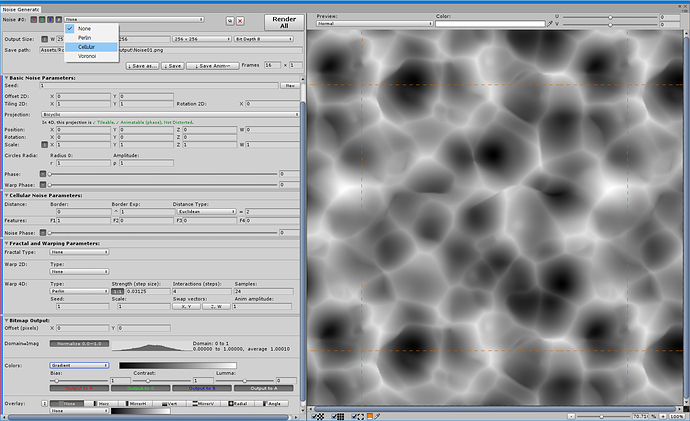 Then it just occured me: Aren’t tileable noise map tools plenty in 2021? Are static noise maps still a thing in 2021? I mean… I know some engines have their own real-time generators, but it’s not something we can afford in any situation… or can we do that?

I thus got a few questions for you FX artists:

PS: no, there are no nodes on it for now.
PS2: depending on the responses, I’ll consider releasing it. For now, it’s just a personal project.

Here’s also a cool tool that i found in another post from here:
https://mebiusbox.github.io/contents/EffectTextureMaker/

I really like what you have in the screenshot.

I’ll check the tool you’ve shared when I get to the desktop again. Thanks!

I’m addicted to voronoi and worley, too.

I’m trying to figure what would best demonstrate this tool’s potential. And asking for suggestions about what I could implement.

My version of Substance is old, so I don’t know if it has this in newer versions, but the two filters I use the most in PS that don’t tile (or break tiling) are the Median noise filter, and the Min/Max filter with the Roundness setting. I think After Effects’ CC Glass is another one I’d like to have, but I guess none of those are actually noise… Curl noise would probably be a popular one, although I still haven’t quite figured out if it’s actually a type of noise like Voronoi or Perlin, or if it’s more of a technique

I actually got Substance, but never really checked into it. Probably I should take a look.

And it’s kind of a shame PS still haven’t get a “wrap around” checkbox on images. Adobe lacks a competitor… until Krita reaches them. And Krita will get them. Judt like Blender did to to Autodesk.

I’m just starting out in VFX so I recently did this in a roundabout way using After Effects to create complex noise, then tiling it myself in Photoshop.

I clearly need to spend some time in Substance Designer and Krita.

Looks interesting! Created account here (hi!) to point your direction to Mixture,
https://github.com/alelievr/Mixture . You can possibly contribute some ideas there. It’s already a really good node based solution for both offline and real-time tileable noise, using gpu for calculations.

It wouldn’t be proper for me to try answering your bullets though, as I’m not really an vfx artist.

Photoshop does perlin noise(render clouds) tilable if you use a power of 2 number. (256, 512, 1024, etc) This applies to the difference clouds as well. I use that a fair bit for distortion textures. I also do a lot of hand painted maps for distortion… just using photoshops tiling features. There are a number of free maps for things like curl noise around the net and occasional free apps as already posted above. Some even directly as web apps like this

A Voronoi pattern generator that generates a tileable Voronoi Pattern


Honestly it’s a great time for this kind of thing because there are so many resources both free and paid which will get you there and a few thousand tutorials on how to make your own.
1 Like