First time participating in a challenge, let’s see how it goes!

For this effect i’m trying something very different, as a programmer i also love when i can interact with my stuff (who don’t) so i’ll be including a fully usable and game ready system for the rocket launcher. this mainly include moving rockets mid air but i’ll see if i can add some other goodness to it.

Last update for the thumbnail 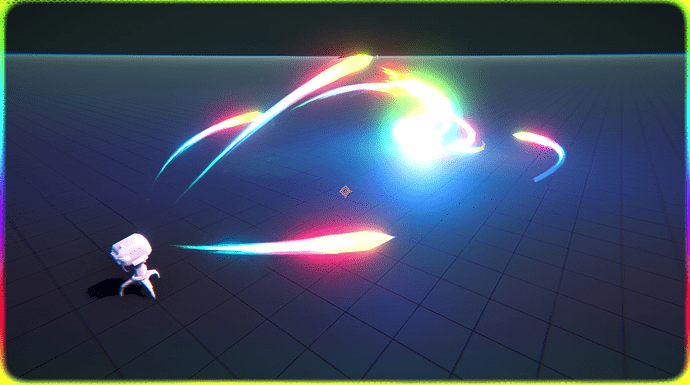 Here is my starting point for the effect (scene only, no vfx yet) 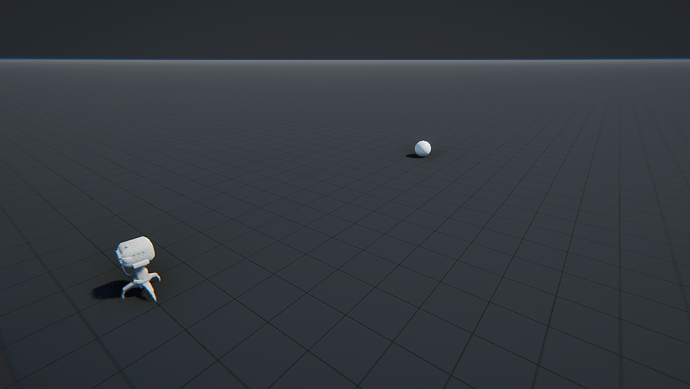 Good luck to everyone!

Programming is now done (90% atleast), i can now focus on the visual effect itself,

Just to see how the motion rendered, i tried to add some random colors, i thought it looked fun

Woah. I hope you share the BP for this!, this looks ultra cool.

I’m using unity for this, i’m a UE4 noob so i won’t be able to answer your question entirely, but.
in case someone wants to reproduce it in unity here is the C# scripts → (MEGA)

As of unreal engine i think you want to divide your blueprint in 2 parts, one instantiating the rocket and another attach onto the rocket who propulse her.

I’ll make it short for you:
→ spawn rockets with a rotation between 20 and 170 in the y axis and 0 to -50 in the x axis (for variation)
→ make the rocket fly forward with a random speed between 45 to 60 (that’s my setup)
→ force the rocket to adjust her rotation by calculating the direction between the rocket and the target.

needs to be shooting out of a unicorn butt!

I refined the missile shape, included an impulse to the trail when hitting and added more complex motion aswell. 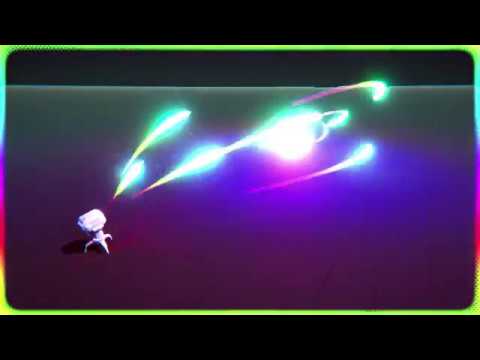 I will probably do another update since i’m not really happy with the way the big ground effect work atm (it feel like fuel to me).

If you have any additional thought / idea let me know !

Beautiful work dude!! I don’t really have much to say on this. Everything looks splendid.

Thanks a lot veer

Could you perhaps tell/explain me abit of how you did the particle pathing/trailing? ^^
They do follow a spline or something, or are they all calculated through code?

I’ve been having some trouble of having projectile actually follow a path, and follow the target aswell, if its moving.

Those are some nice shapes you are getting on those trails!

Hi @RenzoF and thank you,

For the pathing i have answered a big part of it earlier (It’s actually full code), i’ve added more depth to it that i’ll try to explain here.

->The rocket now have a timer (which is very short, like 0.5sec, this mean it will reach 0 when very close to the target)
→ Once the timer reach 0 it will start increase the “seeking power” of the rocket by a huge amount (going from a seeking power of 3 to 50 in 1second). This mean the rocket will try to adjust her pathing every frame and most likely will end up overcompensating (creating these weird smooth shapes).

I know not everyone like programming a lot, so tell me if you want more info or if i forgot something,
Also i can try to upload a ready to use version of the script if you or some people are intrested.

Thanks you @BrianKohrman, i think i spent most of the time redoing the shape than working on anything else lol

I’d love to hear about your method! 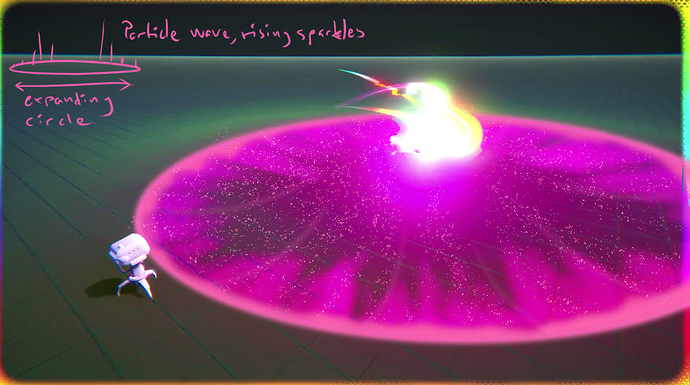 Completely over the top paintover suggestion. Expanding shockwave type thing (in rainbow colours!) with either particles rising up or you could go with an anime type solid, jagged wall type thing

Hey @Urgaffel, I appreciate the time you put into this paintover, actually you gave me an awesome idea!

Too bad there is only 2-3 days left, i’ll try to make something with this for sure.

Whao, thanks for the reply!.
Guess i didnt read good enough x’3
I did download your scripts last day tho, to take a look at (haven’t had time yet to fully analyze them).
I’m a programmer myself aswell (to a degree atleast), so doing something like that fully through code really interests me!, would love to learn more about it.

@BrianKohrman Here are the components that makes the trail effect, also i’ve included a picture of the shader for the additive trail (the main one) it’s just simply made of 3 main group of node

→ one rainbow texture with a panner on the emissive
→ another rainbow texture, this time multiplied with a “mask texture” to give more importance to the middle of the trail
→ A noise texture multiply to many mask (one horizontal so it doesn’t affect the head of the missile and one that is stronger on the side of the trail).

I hope this answer your questions 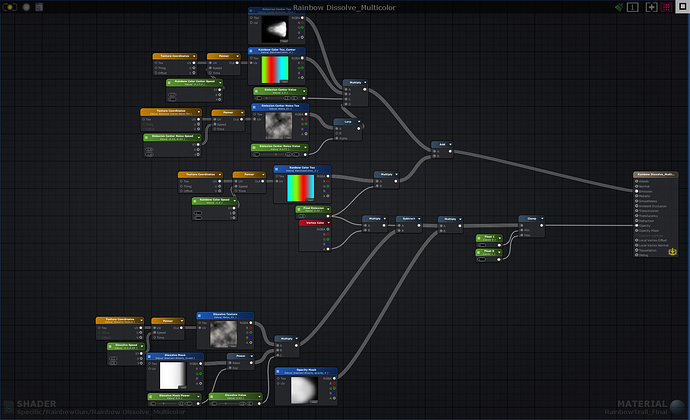 That’s definitely a nice shader with great colors. Thanks for sharing it! I was really hoping to see your method for creating the trail motion, too, if you feel like it.

I’ve redone the script so it’s fully useable out of the box!

I added the part of my script on the rocket launcher (to make it spray at the begining) on this one, i have also cleaned the code and added comments. Just attach it to a GameObject in Unity and it should work just fine.

Btw @BrianKohrman this might be what you’r asking for.