Hey everyone,
My name is Sven and currently I’m a 3D Junior Prop Artist. During my work time I found out that creating 3D props isn’t going to cut it for me so I decided to change the path and try to enhance my skills to become a VFX Artist. I’ve always been dealing with shaders a lot and I have a decent understanding of how particle systems work. Putting all these skills together to create awesome FX sounded like something I would really enjoy… So… here’s my sketchbook so I can keep track of my progress and to receive some feedback from you wonderful and talented people.

To start off and warm up, I tried to recreate the Battle Boss Malzahars R AOE Effect. 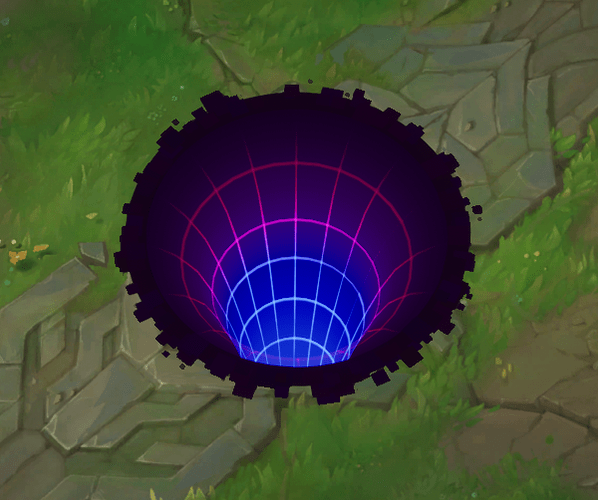 This gave me the opportunity to both refresh my particle system knowledge (working with Niagara) and to create an awesome looking effect without the use of handpainted textures (since that’s a thing I still need to improve). I hope you guys like the outcome and I appreciate every little feedback

Good start and very welcome to the community!

Did you use some tech to display this tunnel on top of the ground without clipping/intersections, or is it just a texture which contains the perfect perspective as kind of an illusion of depth?

Hey Simon, thanks a lot for the welcome

No actually the texture is just a grid. For the effect I used a plane that perfectly aligns with the top of the tunnel and have it not render in the Main Pass and Depth Pass but render in the Custom Depth Pass. Then in the ground material, I set it to translucent and connected these nodes to the opacity.

This basically uses the plane as an opacity mask as its the only thing rendered in the custom pass to tell where the ground should be invisible, and under the plane is the tunnel with the panning grid texture

Nicely done! Thanks for sharing

Adding more context for anyone seeing this:
This “technique” is also known as Stencil or Stencil Testing. You can give different meshes/shader different IDs in the Stencil Buffer, and grab that info of a specific ID in another shader/material. This should be possible in all engines, as it also is a feature in GLSL.

Here how to set it up in Unreal Engine: How to Create Masks With the Custom Stencil Buffer | Tips & Tricks | Unreal Engine - YouTube

See, you always learn something new

This method shown in the video seems even better than my version since it gives me more control on what ID should be considered for the opacity mask in my material instead of using everything that is rendered in the custom depth buffer. Thanks a lot for enlightening

I started a second project today. The goal of this project is to create a whole VFX Kit of Lux in the Arcade Skin Line. The reason I go for Arcade is because there are already several skins I can use as a reference and I took Lux as a champion because she has all kinds of VFX, ranging from projectile to little explosions to big beams. I first started working on the auto attack, a little projectile to get things going. Note that everything I show in this post is heavily WIP!. 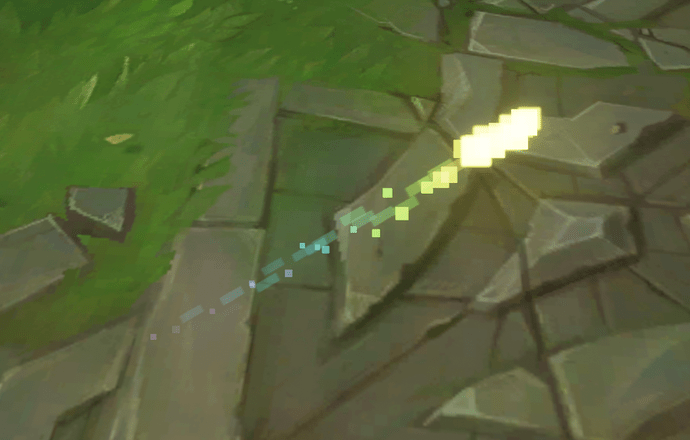 I took inspiration from Arcade Ezreals auto and tried to go for a more rainbowish color scheme to emphasize the light thematic that Lux has going. The main goal for me was to get a visual hierarchy going, so that the front of the bolt has a greater visual interest. Turning the image to grayscale really helped with that. The more stretched pixels are there to show the direction the bolt is going. 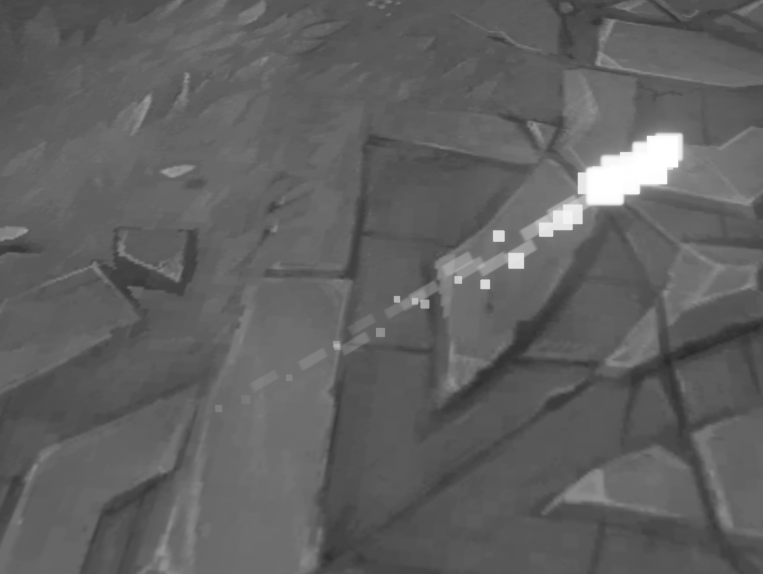 I hope you like it, I will do more updates as this project goes along

Next thing on my list is to finish the auto up by adding a hit effect when the enemy gets hit.

I found some time to work on Lux’s Auto again and decided to work on the hit effect. For the hit I wanted it to capture the arcade style by using a 2D Flipbook as the eye catcher and some fading/shrinking 3D sprites to make the effect more grounded in 3D space. I also used a transparent pixelated sphere to further emphasize the Arcade style while also bringing some impact light in the effect… This is how it turned out 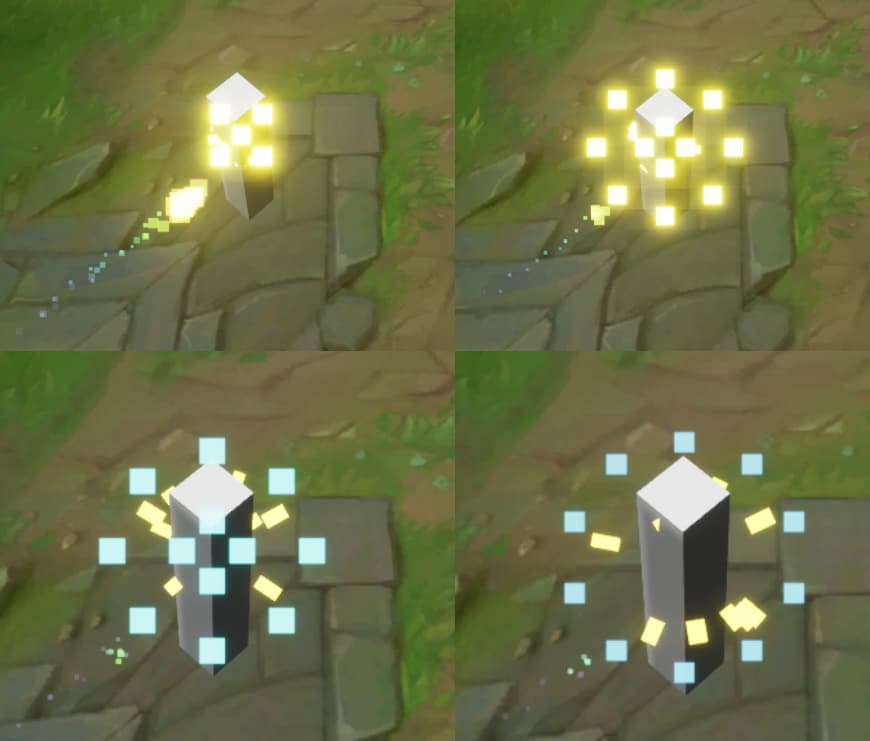 I also went ahead and used some Unreal knowledge to create a more user friendly testing environment by being able to control a pawn just like in League of Legends… I think its very important to have the direct comparison on how the effect works in a game environment. Also I really wanted to recreate the movement arrows, which was pretty fun

As always, feel free to give feedback or criticize my work, it would help me a lot to improve

,
I thought I take a step back from doing specific League VFX since I saw a concept from Daniélle Viljoen that I really liked so I wanted to try that out. 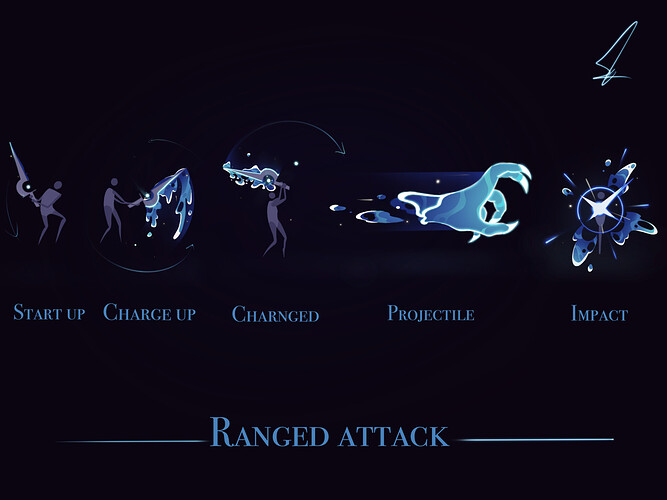 I was especially interested on creating the shader for the effect so thats the first thing I went ahead with. Here is how it turned out:

Next thing I’m tackling is making a proper hand mesh and do the animation for that since I might have to tweak the material to fit the animation better.
As always, feel free to criticize or give feedback

This grabbed my attention.

I love ppl drawing concept before actually making fx. My case I can’t draw so I just straight forward imagine how it looks like and make the hell out of it

I’m not 100% set on the way the water dissolves yet but I think I have a solid base to work with.

Let me know what you guys think

This is the result: 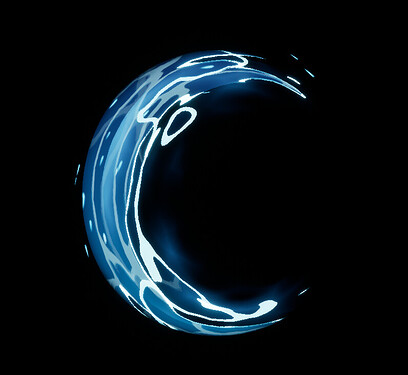 I still think there is room for improvement, so if you guys have any suggestions, feel free to give feedback

the feedback for improvement is staging elements/ overlap.

either a secondary mesh , or adjustments to shader but …imho draw out the highlight fade : give it more independence exaggerate your smoothstepping, let it linger more maybe add some distortion or possible change the tiling so that it stretches out as it pans

here was an initial paint over, but I think even i could have pushed the stretching-out like taffy, more

This is a really nice shader!

Hey Torbach, thank you for the feedback. That is super good advice and I will definitely try to implement that. Thank you also for the overdraw, this really helps a lot to understand what you mean

I used the time today to add more layering to the VFX as Torbach suggested. I seperated the white lines and the blue water and made the lines erode and get thinner towards the end. This also allowed me to erode the blue water with a gradient, leaving only the white foam and the drops. I also quite liked the hard edged style it has, so I kept that in. Heres how it turned out.

As always, feel free to give feedback and let me know what you think