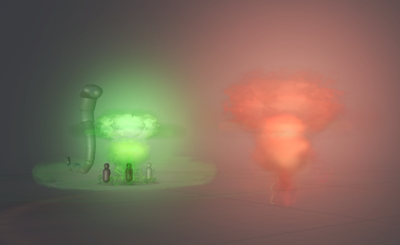 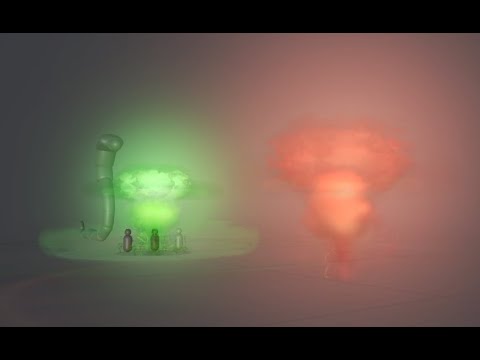 turned thread → sketchbook, to throw around ideas rather than new posts each time

particles instead testing how flexible they are

I have been impressed with Lacuni Fire since I saw Diablo3 GDC talk,

The base is looking good already.
Looking at the reference, it looks like there are three PS on top of each other. Two like the ones you use and one that does a big burst. The quick scaling in the Burst kinda sells it for me.
Looking forward to see your progress on this.

still going to noodle those textures a bit, but that’s it

quick update, I could polish the texture for hours frankly however all the motion and shader multiply means it’s not exactly necessary for sketching

here ill share 256 versions for others to play with if they want to give this one a shot. 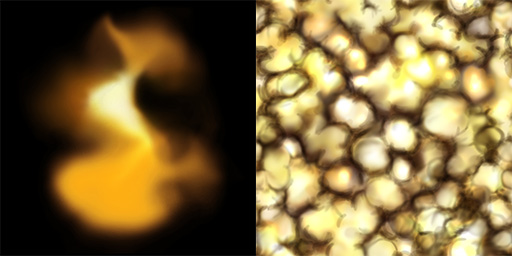 good job!
i was also very impressed by the d3 effect. it’s astonishing how good it looks.

I repurposed Lacuni to due a witchdoctor like frog-blood soup but trying to feel older like Diablo 2 sprite work.

My goals for the past few days was to keep with Julian Loves GDC talk, take something relatable and tap into lizard brain references to sell mood - so I went through a few ideas

Intoxication-Drunk popping bubbles in the air seemed the strongest allegorically 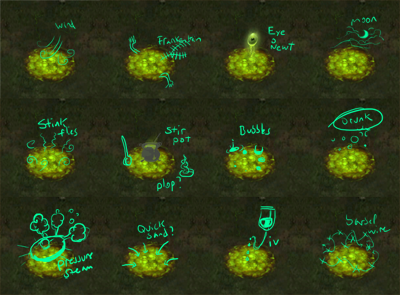 TBF I attempted to do the ‘Frankenstein monster’ and relate to stitches or fleshy bits but the motion relates more to worms/snakes… not a bad feel, just wasn’t what I was going for

so I left them in

— i’m certain there is an easier way imo it took a lot of nodes to figure out something that worked.

shader I settled on and some various textures I was testing 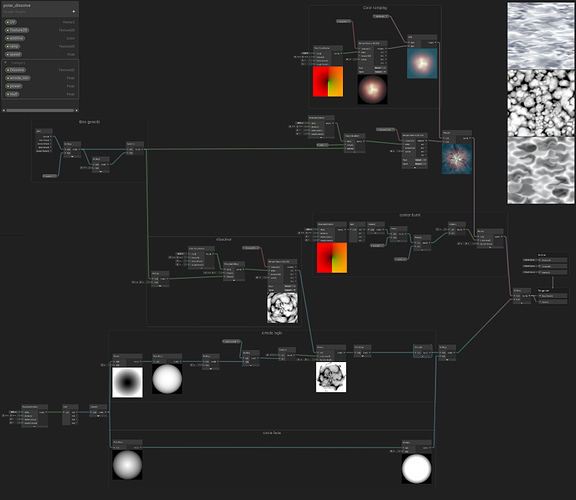 now for edit/update using some variation, added a smoothstep into the mix with Lerp to remap outcomes + some new textures sketched for the ideas

I love it, however I want to work on making it softer rather than the more purist traditional water mass
sorta like the other game versions

I sketched this up yesterday as a waterfall strike downward,

im not sure if I like the steam cloud in the sky or hate it and leave the emphasis purely around the strike but I think ill add and touch up more tonight.

I think the cloud could potentially make people confuse the effect for rain (as opposed to a waterfall). Regardless: I believe that the timing between the three elements (i.e. cloud, downpour, and splash) in that particular effect could be improved.

First think that came to my mind was “maybe grab your previous waterfall and make it go wild?!” hahahaha. Joking apart, I believe it would be cool!

so here is my current waterfall strike 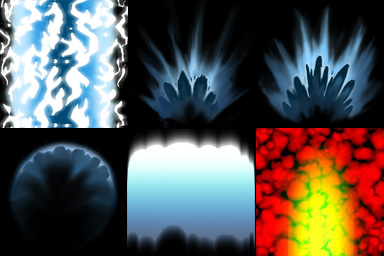 not what i was originally inspired to do, but I might, …maybe add a setup. Some build up ball of water that becomes the attack 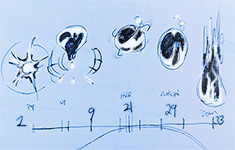 I love the water pillar, but the splash isn’t really catching my eye.

I prefer this splash here. Bolder, contrasty and foamy

The circular shape going upwards…hmmm what is it? Is it meant to be water or just fitting the theme?

i’m conflicted; sorta dabbling with this one – I’m considering working the emphasis. I am curious how far I can push that, I forgot to add an emissive mult :DOH! ill do that . maybe tomorrow with more time
edit did it anyway cause why not, and love it! i touched up some timing white should lead your eye into the shockwave and darkened the waterfall at the top

The hemisphere is for a shockwave, conceit is an impression of a cannon ball hit. I made it because I had fun illustrating the spikes and wanted to adapt it to a sphere.

in order to do a ‘good’ job i would want to map a lot of this to geo, finesse erosion for dimensional/motion of texture on changing surfaces… i dont have maya at home and I get anxious about opening up blender >.< i dont want the stress lol. I should buy maya … expensive! but worth it maybe

Power slashing
Sig’s post Most common / Bread & Butter Shaders and Materials "techniques"? - #26 by Sig for the red slashes seen in the yt vid 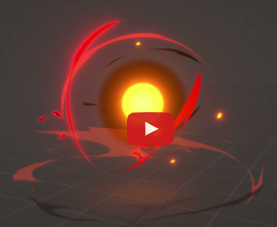 As particle mesh so it can revolve around geo - results 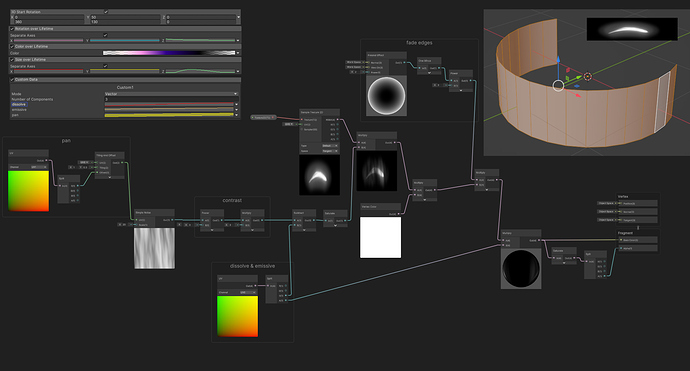 distinguishing slashes in context; I like them both but harder shape & dissolve is my favorite style now.

Yeah, the ones simply fading out are cool too, but the hard edge dissolve really is something else in my opinion. I love it!

My favorite one is the red, followed by the purple one (the one below it) 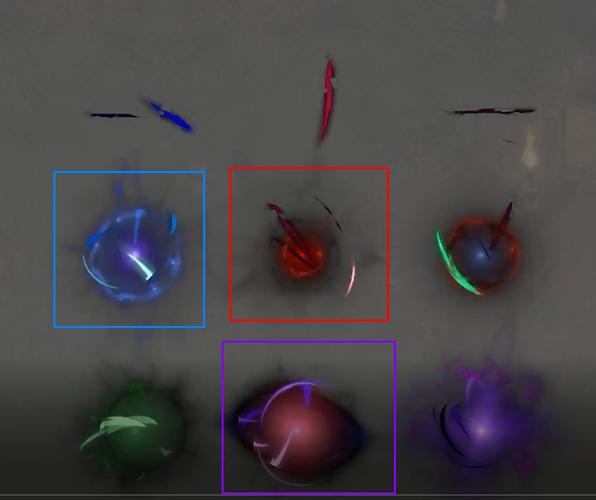 Did you notice the “bubbly” look you got on the purple one below the red? Really cool!
I feel the green one could end up giving a really cool nature/healing vibe if you added some delicacy to it

I’m really glad the stuff I brought in - even though I didn’t make it - sparked some cool experiments!

I’m finally back to my Orb thingie and I instantly remembered you posted some cool stuff.

At the moment I’m trying to convey something similar as what you’re doing with those smoky shapes being sucked in/out. 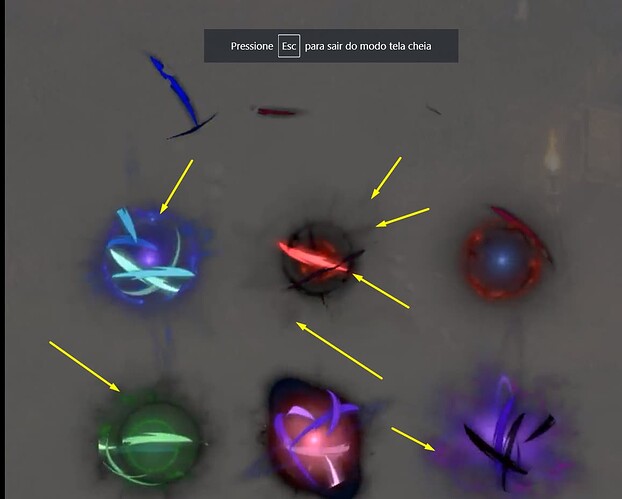 image1158×930 37.2 KB
I painted a bunch of stuff but none of them are looking nice in the engine. Would you mind showing the textures you used?
next page →