Note: This post will be using a heavy use of .gif and Imgurs “.gifv” ( which uses a standard HTML5

For my first ever Official-VFX-Sketch, I can think of no better effect to start with then a fire. A Campfire no less. This month will be “shorter”, as nothing will be done during GDC’18. If it comes to pass that I can surpass this basic goal before the month is up, I’ll forgo some of my imposed restrictions, and see how I can push whatever farther.

I’ve made effects in both before, but never the same thing, with the same assets.

What I want to do is a fairly simple affair. I want to make, as close as I can, Campfire effects in both Unity (Version 2017.3) & Unreal 4 (Version 4.18). That’s it. In the event these engines for some reason update this month, I’ll be ignoring it. 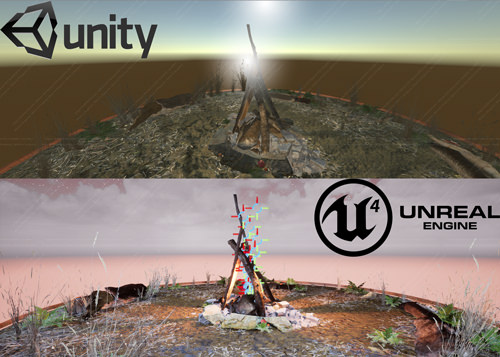 I’ll be making the VFX Texture Assets in Photoshop CS4, with the Normal Maps being made in assistance with Ndo. The fire, smoke, embers and all as need be. I’m sticking with simple as much as I can. No simmed flip-books, No sourced textures, No volumetric mesh-manipulation from textures. Just cards and a ton of tweaking in each engine. Less is more.

In Unity, the Shader Plug in I’ll be using for the Shader Creation, is of course, Shader Forge. This is so I can control certain aspects of the material as I can in Unreal.

I’ve already gone and made a basic setting for my fire to live. The “Nature Stuff” was made with the free Quixel Megascan assets, and most textures are compressed in engine to 1024. All other textures of the scene were made at 1024 in Substance Designer because why not.

WHAT DO I HOPE TO LEARN: 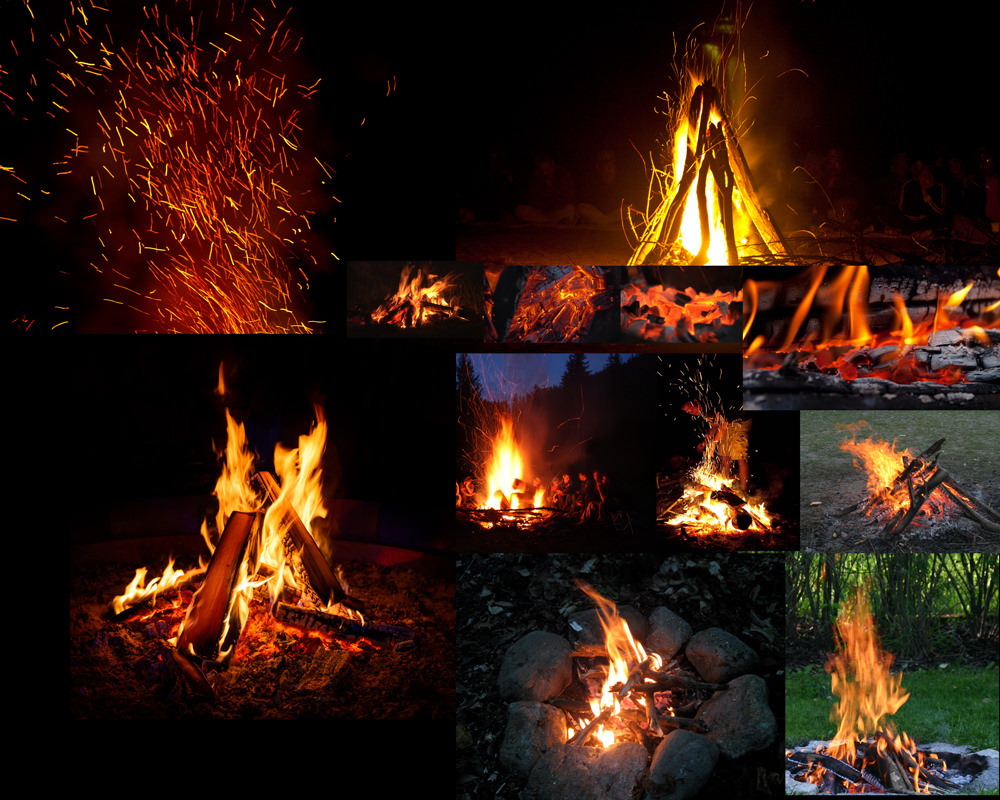 ME JABBERING ABOUT WHAT I SEE!

Lots of embers. Lots of licks in those flames. Not very noisy on those edges. More like lots of pikes, instead of lots of saw blades - for those of you into abstract observations. More motion at the top then the bottom. Lots of quick Squish and Squash in the movement.

The fire tends to wrap around the logs, but that effect will be a stretch goal, as I of right now am unsure how I would go about making such a dynamic layer to the Overall effect, short of actually going and making directly the effect.

Here is my first iteration.

Right now, all I want is to get the basic shapes and motion right. That is the focus. Here is my quick V1 from both engines. Unity is… fighting me at the moment.

For these images, I put the fade in and fade out into this so that it would be obvious when it repeated. Seeing as this forum seems to handle Imgurs “.gifv” a bit better then other forums, I’ll forgo this little detail in coming updates.

I was going to post this yesterday and got distracted by another personal project. I’m feeling fairly good with Unreal 4 sans a few obvious little qwerks I need to iron out, and Unity… geeze Unity. Unity isn’t just fighting me, it crazy.

Starting with the stronger work 'cus that’s what I’m supposed to do right? I think I’m fairly close to matching my reference movement wise. I’d like to push it a touch farther with the overall stretch and squash, but over all I’m fairly happy with the movement. I’ve put part of my motion reference from my first post next to the fire I’ve made in Unreal 4.

Right now it’s obviously far more styled overall then realistic, and that’s ok. I’m curious to see if I can get the color closer to reference though. I’m not sure how I would go about it right now. Perhaps, instead of an additive blending I may play around with a multiplicative blending, as it seems to me that what realistic fire has is, oddly enough, a degree of dark to it. Plus, it might help really push the contrast that way. And of course, I need to see about fixing that black-glitch flickering.

Then… there is Unity.

Not only that, but at one point I was seeing results that were… not right. I renamed some of my assets to keep things tidy, and suddenly my shader just stopped working. Had to make a fresh shader forge shader file, and copy and paste the nodes to fix it.

Oh and one more thing…

I forgot that any changes you make while in “Game Mode” ( with play set to on), can’t be saved. Oh yeah, that’s the best. Thanks Unity. >_<

Seeing the different interpretations of each engine using the same assets has been as enlightening as I had hoped. I can feel that there is something I need to learn… but I don’t know what exactly what it is.

Now that I’m back

and settled in after GDC’18, I find my heart

seeking to get started right away on my demo reel content.

I was going to add the heat distort and vector paint in the charred logs when I got back, but as I sat down to do this I realized… well… as I said. My heart isn’t into improving this effect anymore. In a weird brain way, I’m kind of bummed about this, as I hate to leave this so… unfinished. Yet… I want to strike the anvil of my ideas with the knowledge I gained from GDC’18 hot

in my mind. Thus this is to be the last update, per the parameters I set for myself. I came into this as I currently know how to do; shooting from the hip. That’s kind of how I make effects right now. I have no idea what I’m doing, as usual, but I know enough to make a jest of what I seek.

So I cobbled together these fires, which for what it is I’d say… decent. I guess. An OK first time Campfire with my basic knowhow. I mean, it does look like fire in some way. The Unreal 4 one more so then the Unity one, per the reference I was using.

One of the virtues of knowing and experience is that it gives a reference point to help form a plan of attack. How to anticipate potential problems along the way. In my case, in my blind attack, I made such a focus on movement that I didn’t take as much time to consider how I was going to go about color. I just went… maybe this will work. It does work, but not as much as I would have liked. Far too… flat.

The biggest take way from all of this? The power of Blend Modes. It’s not really been something I thought about much, as it’s just “here is how you setup your material” for VFX work. I think that’s been where my biggest blunder of ignorance lies for this, which of course started at the very beginning. For both Unreal & Unity. I did all my work on the wrong blend. I had started out in Unreal 4, using that masked bland. Unity doesn’t have a masked blend (as far as I could tell), so I used additive instead. “Oh I’ll just match them”.

So that is what I noted for myself, of my Campfire for this Forum Contest. I would like to hear your constructive criticisms, suggestions, and thoughts should you have any. Or… we can all just agree this sucks and not comment. That’s an option too.

(Won’t learn much more from that option though.)

For the final showings, here is the Unreal 4 Fire (with fixed “black popping” issue), as well as the main shader node flow and the view of the effect inside the effects editor.

Also, wanted to show the main shader for the fire in Unity, so that is there too.

This was fun. Thanks for the topic Realtime VFX.

Look forward to the next one.